If you grew up in the 70s and 80s like I did (and I know many of you did), it was an important time in TV history.

Dallas reigned supreme on the airwaves as we were all locked into this edge-of-your-seat drama, based in Texas, all about the oil industry and the business surrounding it.

Power struggles, deception and ambition. The Ewing family ranch near Dallas pulled us all in week after week as we tuned in to see what in the world was going to happen next to J.R., Bobby, Sue Ellen, and Pam.

And of course, there was plenty of romance and trouble in paradise along the way. 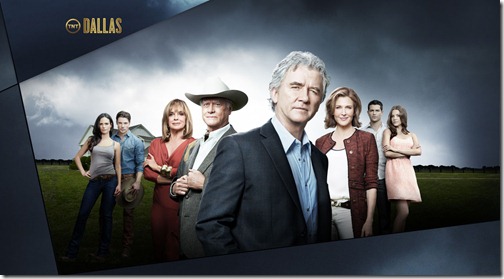 Did you all get into that show as much as my friends and I did back then?

My friends and I discussed it all the time. This was way before reality TV took over the networks. Dallas was our very own night-time soap opera. Naughty enough to be exciting, but not too risqué that we felt bad about getting hooked on it. I don’t think my mama approved of Dallas, but I sure loved watching it.

And the biggest, most exciting cliff-hanger of all time was on the show during one of the season finales!

Those words rang around the country as we all couldn’t wait to find out the answer to that question. Now, I can hardly remember who did shoot JR. Wasn’t it his sister-in-law? What was her name?

I think I’ll have to watch just to see how JR, Bobby and Sue Ellen have aged. I see that Bobby (Patrick Duffy) is a lot more gray this time around. Linda Gray looks pretty well preserved and JR (Larry Hagman), well, he has been around a long time in TV land, from I Dream of Jeannie all the way to the original Dallas.

The show continues this time around with continuing rivalry between JR and Bobby Ewing, but with the younger generation at the forefront.

And there’s an online game you can play along with, it’s called ‘Rise to Power’, it’s a social game. Check it out here to get more information about the game. If you play ‘Rise to Power’, you declare your allegiance to a character (before 9pm EST, June 13th) and you could win over a thousand prizes as this new set of characters deceive and climb their way to the top.I’m giving my allegiance to Sue Ellen!

You can find out all about the New Dallas at the official site. Check out the ‘Rise to Power’ social game to play along and take a look at the links below for more information:

So, I have to ask you this! Who’s going to be watching the NEW Dallas? I will definitely have to check it out. The old one sure was fun to watch!