Another year, another garden!  We’re thrilled that Daddy feels like gardening again this year.  This time last year, he was about to come down with c-diff, something that would change all of our lives forever. We didn’t know for about 3 or 4 months what was going to happen to his health and all of you following along were praying for him and we SO appreciate that.

We didn’t know if his health would ever be the same and even though he’s not as strong as he was a year ago, he’s doing well enough to get out and plant his garden this year and that makes us all happy.  We’ve encouraged him not to go so big, but apparently he can’t NOT plant that plot of land that has been his garden for so many years and so it’s full once again and will soon bear the bounty that his hands produce.

A little more about his health.  He’s still on a lower dosage of antibiotics to keep the c-diff at bay. That has been the only solution we have found to keep him healthy and happy, with care from his gastro doc.  He doesn’t want to do any surgeries and at 90 years old, we just want him to live life and enjoy his days as best he can.  He takes them 4 days a week and is still on probiotics too.  His appetite is better than ever and he eats like a horse.  His sweet tooth hasn’t gone anywhere either and mom is constantly feeding him, so all of that is good.  At this point and after all he’s been through, we’ll take it! 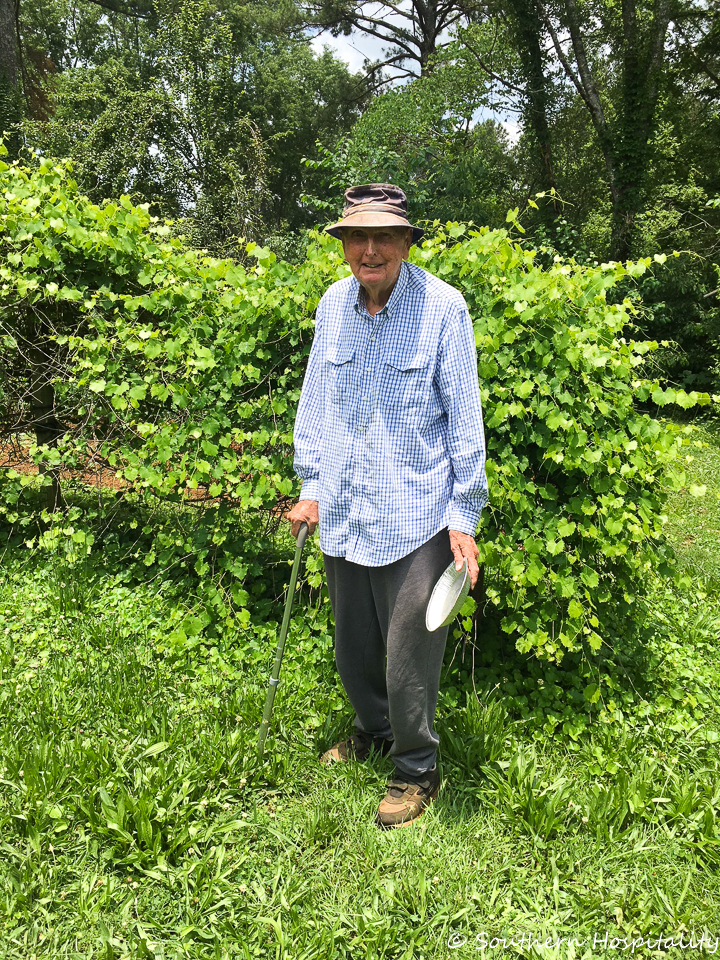 As you can see from that smile, he’s happiest when he’s in the garden, so we are happy that he’s out there again this year.  Cutting back from 2 gardens to 1, just 2 years ago was a major big deal for him, but it was time. This one is all he can handle now!  And as you’ll see below, this is not a tiny little garden.

As you’ll also note, he’s using a cane now. We’ve yelled at him enough that he needed it, so he’s finally using it all the time when he’s outside and when he goes places, which makes us all feel better.  He has a garden stool that moves in the garden with him so he can sit and do things on it. 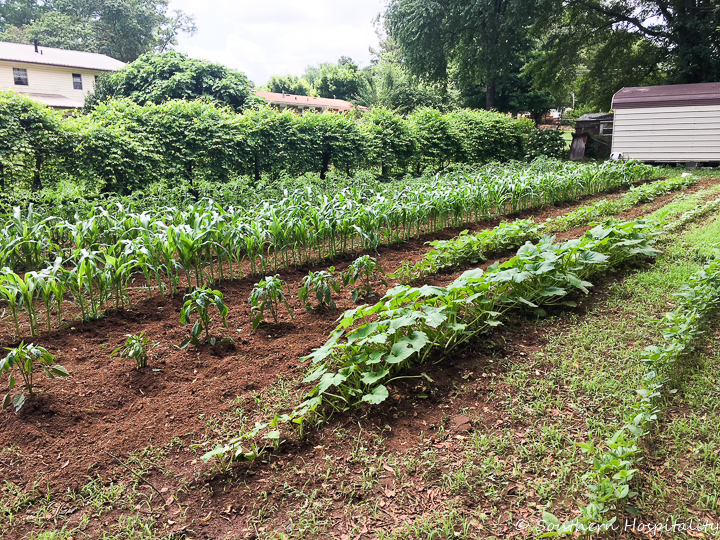 The rain has been abundant so everything is growing, which means the weeds are prolific too.  He does have a tiller he can run through the rows to keep the weeds down, but as you’ll see in the videos below, a good old fashioned hoe seems to be the preferred method of keeping those pesky things in check.

The garden is doing well. He has planted just about the same crop as he always does, starting with tomatoes and corn. 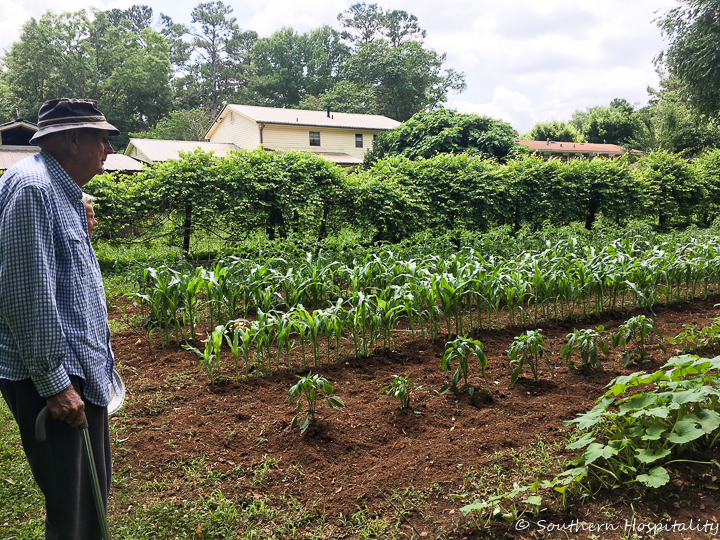 Looking on, there’s 2 rows of corn, peppers, and squash rows that you can see here. 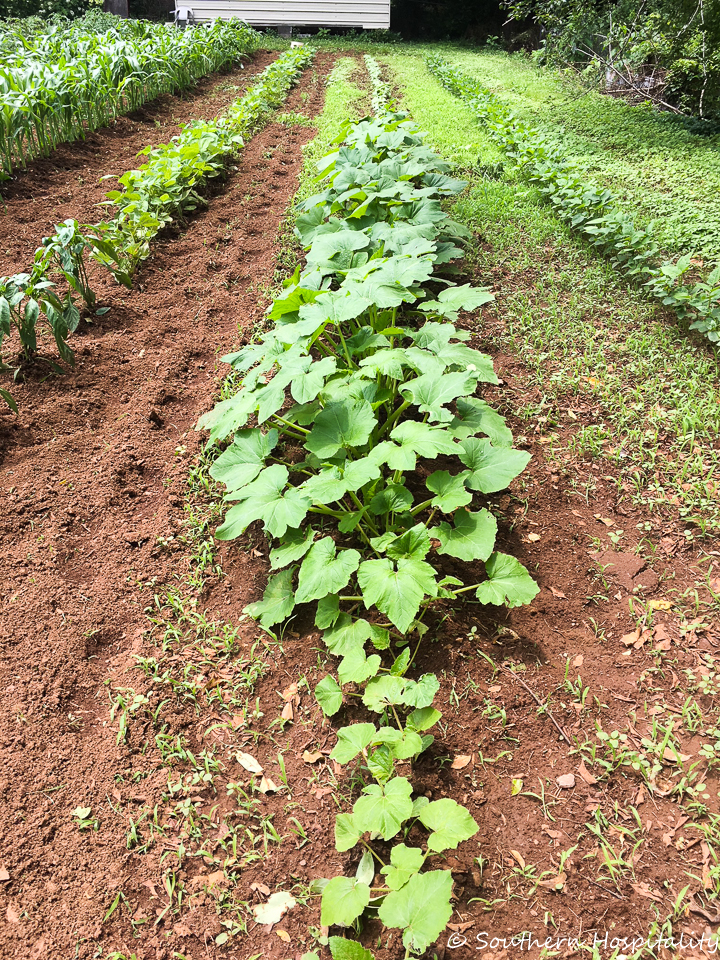 Squash here and green beans to the right with okra down the way at the other end. 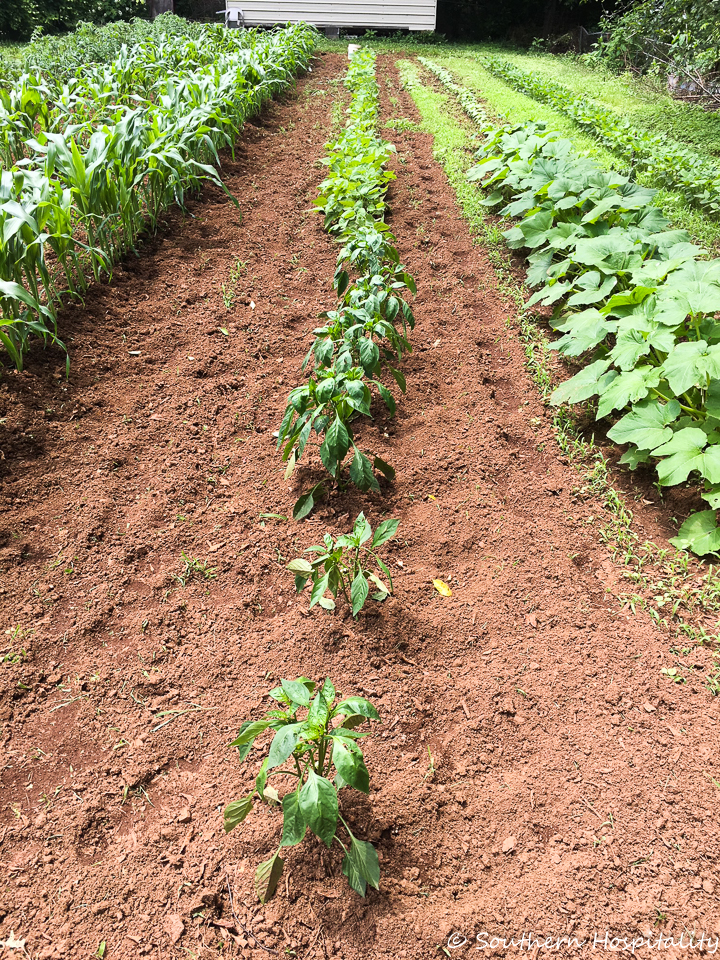 I think this is the pepper row with something else at the other end. I heard eggplant in there too. 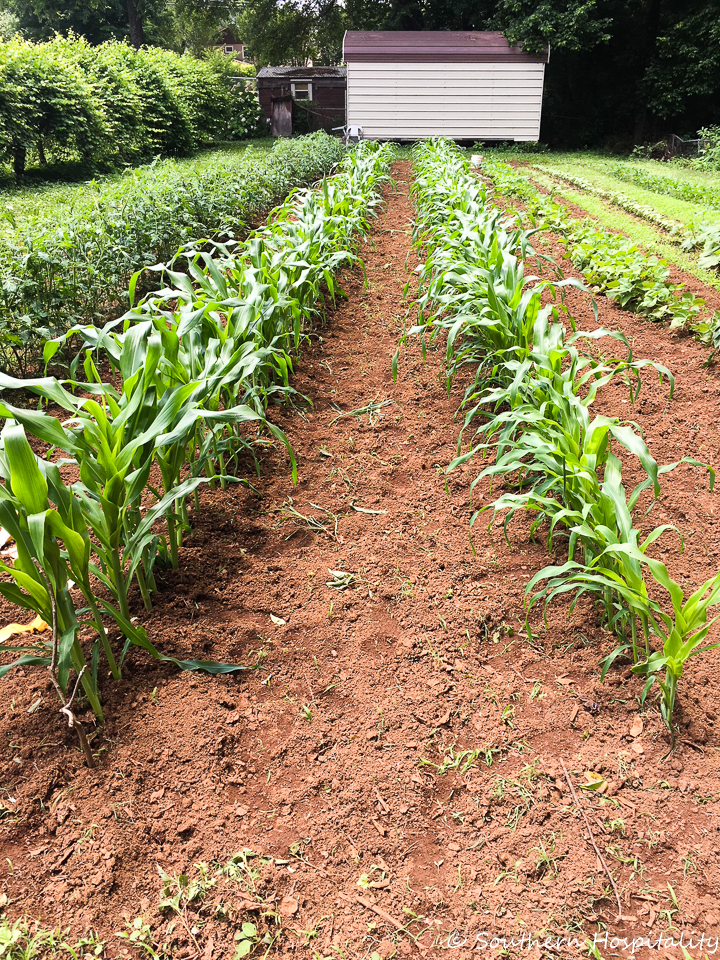 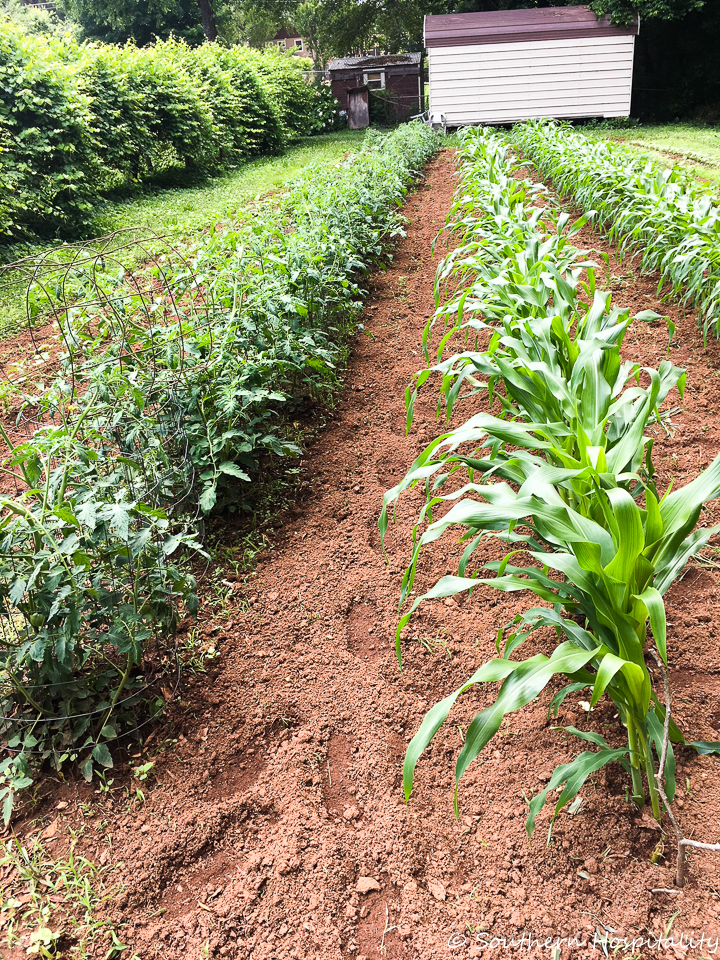 One long row of tomatoes are looking good too, this is my fave and I can’t wait til around July 4th when they will start coming in.  I always look forward to that phone call from mom…the tomatoes are in, come and get ’em! 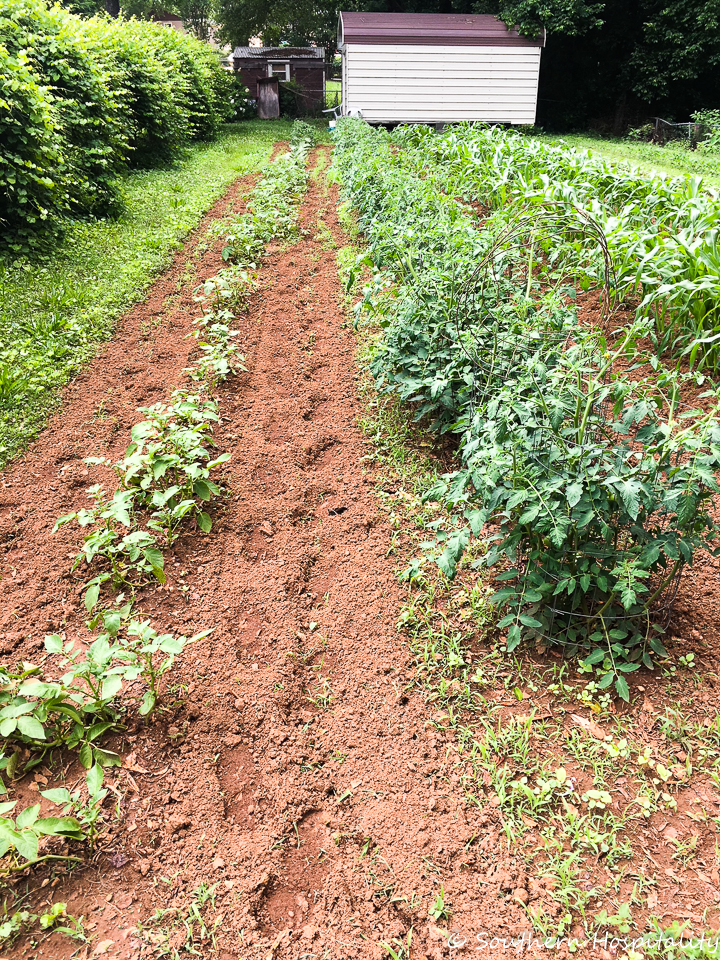 This is potatoes and something else down the row. I’ll do another post once everything starts coming in so you can see what it all looks like. There’s also cucumbers growing in another spot up a fence.

He’s a master gardener when it comes to growing veggies and about 60 years of growing will do that to a fellow. I’m so proud to have a gardener daddy who knows how to grow food off the land and eat home grown produce.  We’ve been so spoiled and I know one day Mark and I will be growing a few things of our own. Mark’s dad also gardens and this year he only planted tomatoes, about 50 plants!  Between both our dads we are set on tomatoes!  What a blessing to have them both. 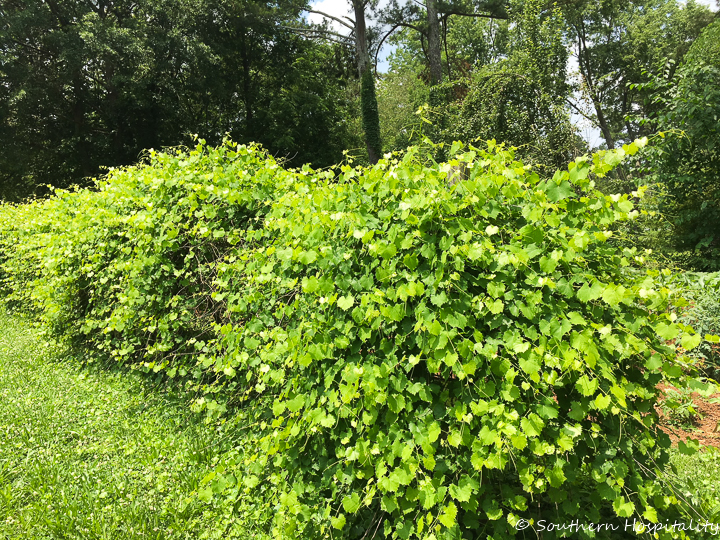 Here are the grapevines daddy wanted you to see. These are muscadines and scuppernongs, both Southern grapes that are very sweet. Last year, Mark’s daughter, Traci and I picked a bunch of muscadines and took them to Mark’s dad and he made homemade muscadine jelly that we all got to share in.  What a treat!  There’s no way to eat all the grapes that come in on these vines. 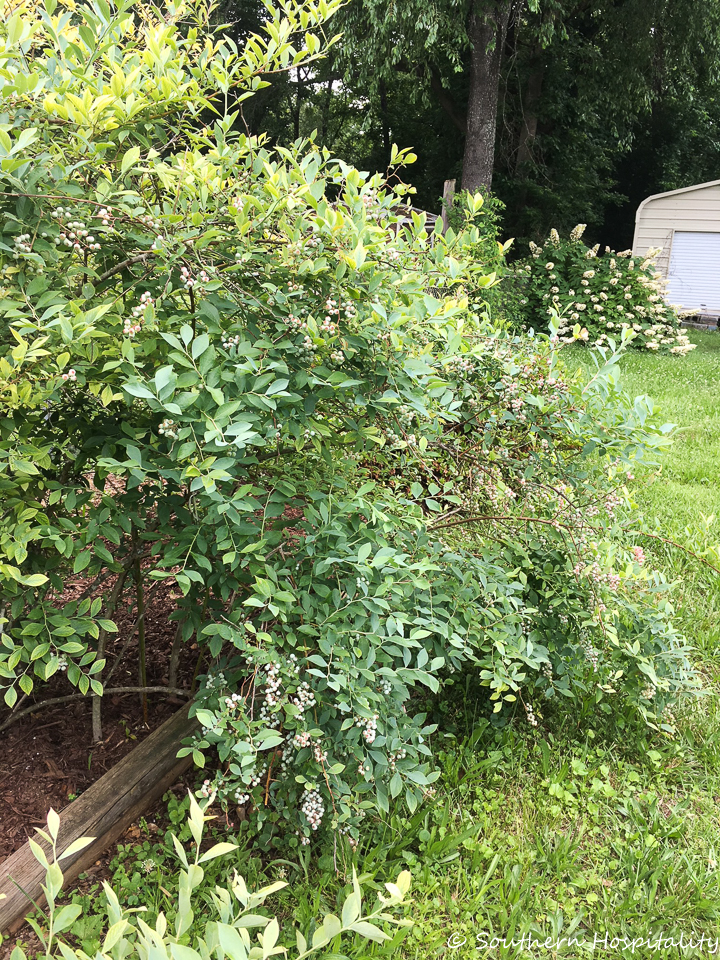 Dad and mom have blueberries too and it will be nice to have some fresh blueberries if the birds don’t get them first. They have to cover them up with a net. See those pretty oakleaf hydrangeas in the distance?  I love those and just transplanted a couple of baby plants to our house and hopefully they will grow this big eventually.  One of those plants came from my backyard in Birmingham. 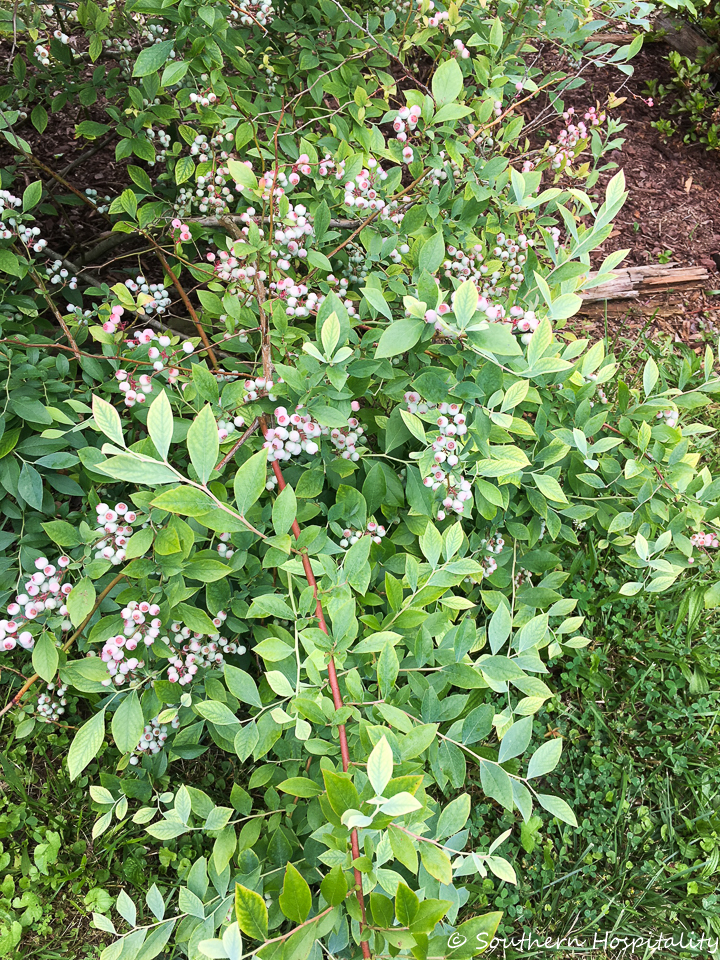 They are pretty loaded though! 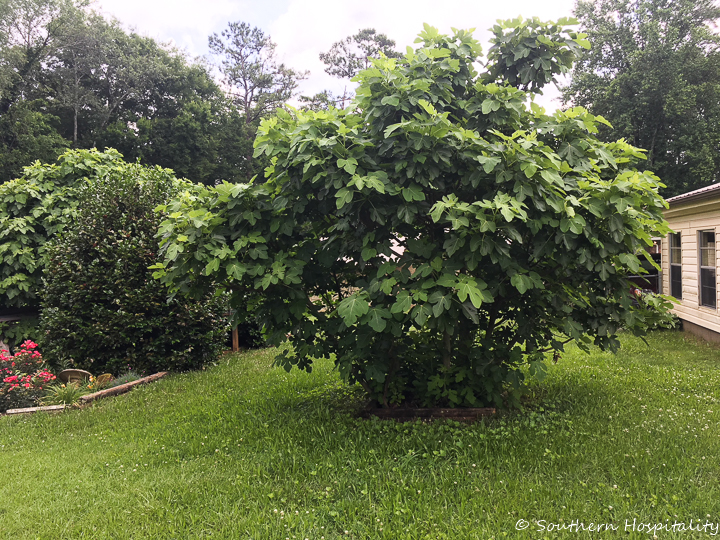 A big freeze killed dad’s fig trees down to the nubs a couple of years ago and we didn’t know if they would survive the cutting back he had to do to them all, but as you can see they are growing like crazy and they have plenty of figs on them this year. They had a few last year too. See the one to the left, above? That’s right behind his swing, his favorite spot to sit. 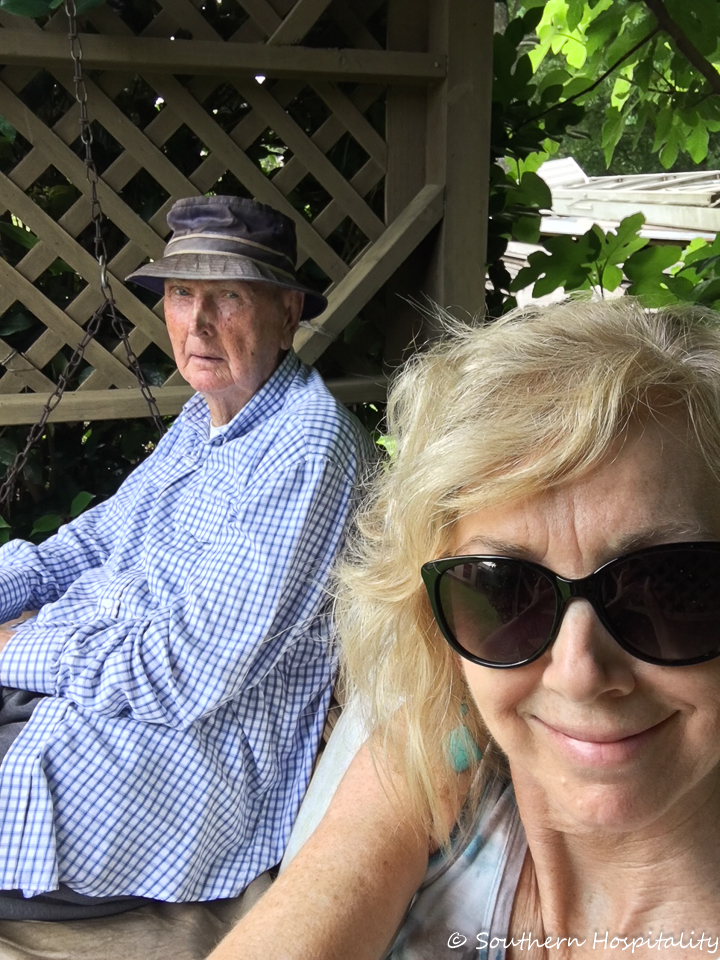 We’ve spent many a moment on this swing pondering life and talking.  He’s such a good daddy! 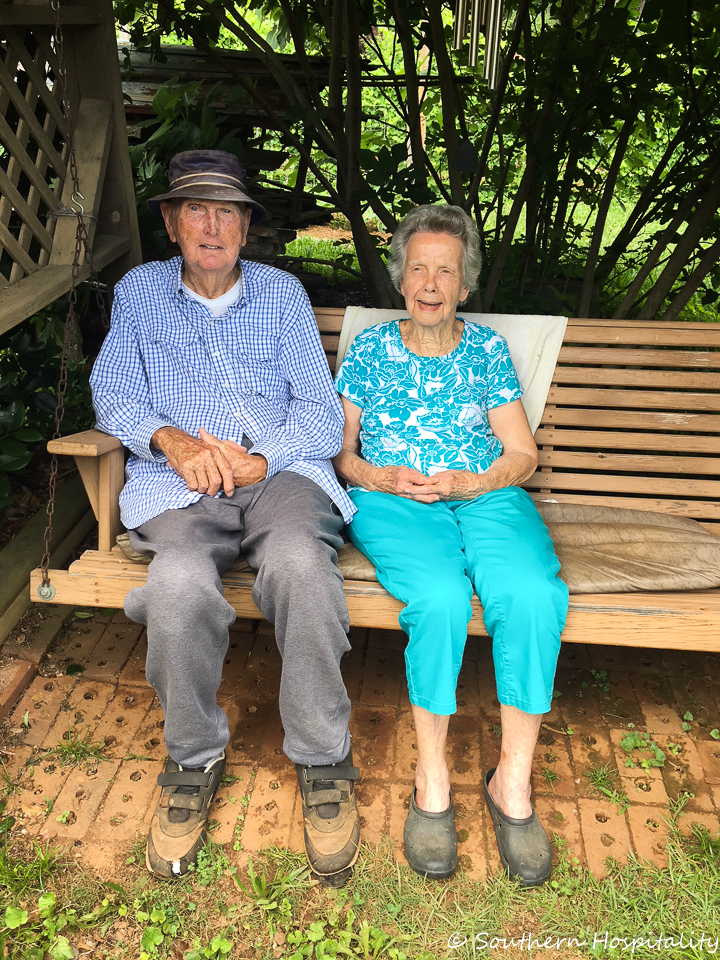 Both our parents are so precious and I know how much you enjoy seeing them.  Salt of the earth doesn’t begin to describe these two and I know you appreciate that so much.  You won’t find two finer people on this earth than these two. They are loved by many, far and wide, you all included!

That’s an update on the garden!  If I was a better videographer, I would know how to edit and make these videos really cute, but that’s a skill I have yet to master. In the meantime, enjoy these little video snippets from last week in the garden. Be sure to listent to the background banter going on, it’s the best part!  One day I think I’ll just turn on the video camera and let them talk, you never know what’s going to come out!