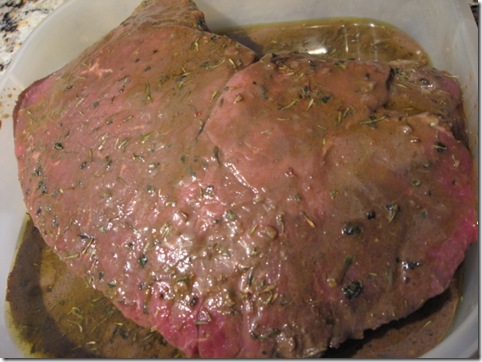 If you’re not a red meat eater, you might just want to click on outta here. We are definitely meat eaters at our house. I’ve never been a real expert on cooking beef other than roasts in the crockpot and such, but I decided to venture out and try a recipe I had for London Broil. Now, one thing I’ve learned about cuts like this. You have to marinate them, preferably at least 24 hours or they will be tough. That’s what I did with this one.

Here’s a good recipe I found for a homemade marinade: 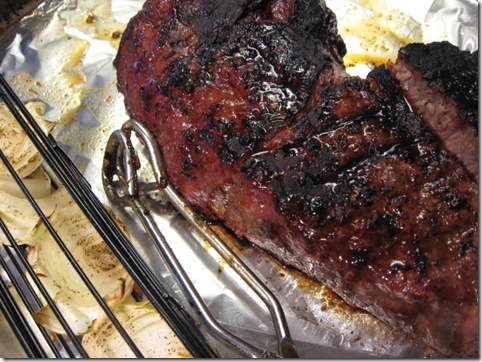 We grilled it about 12-15 minutes on each side. My hubby usually grills, but I have to watch him, he’ll grill things til they are like shoe leather and I like mine pink in the middle. Not bloody, just pink, medium-well. So, I kept an eye on it this time and it turned out just right. Pink and perfecto!And he liked it too. 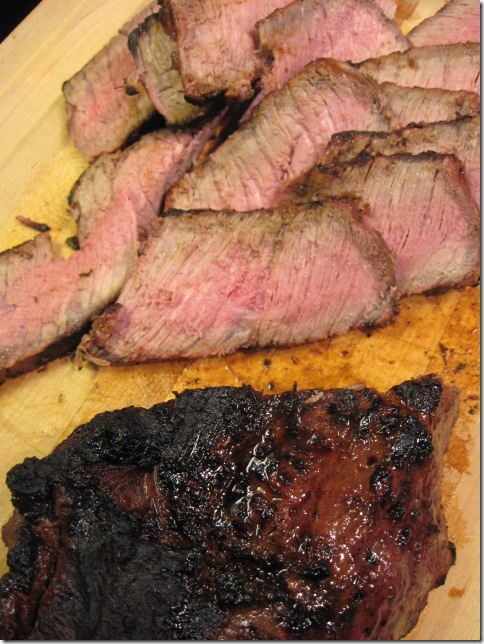 It was very delicious with the marinade and marinating it overnight makes the meat tender. We ate on this for 3 meals and it was great, all for under $7. I fixed it with side dishes the first night, then sandwiches for the Jazz Fest, and then with what was left, I made beef fajitas. Publix had them on sale recently, so I picked up another one to do the same way.

In a bowl, whisk together marinade ingredients until combined well. Put London broil in a large resealable plastic bag & pour marinade over it. Seal bag, pressing out excess air and set in a shallow dish. Marinate meat, chilled, turning bag once or twice at least 8 hours. Preferably 24 hours.

Preheat grill and set meat on grill, turning each once, 9 to 10 minutes on each side, or until it registers 125 to 130 degrees on a meat thermometer for medium-rare meat. Alternatively, meat may be broiled. We cooked ours longer for medium-welldone.

Transfer meat to cutting board and let stand 10 minutes. Cut meat diagonally across the grain into thin slices.

I’m joining Jen for her Tasty Tuesday today, so head on over for lots of other recipes.