Please welcome my guest today, Christy with Southern Plate. I had been by Christy’s very informative and fun food blog before, but when I happened to sit at the table with her at the Blissdom conference and we both had been to each other’s blogs, it was just meant to be. And Christy invited me to guest post for her today, so go over and say hello, please!

We are kindred Southern soul sisters and can relate on so many food levels. I just fell in love with her great attitude and personality and she is coming by today to share a very fun recipe with all of you. I saw this on her blog and told her this is the one I wanted to feature. My mom made these homemade doughnuts for us growing up and I thought they were they best things EVER! Who needs Dunkin Doughnuts with these at your fingertips. Well, you do have to fry them up yourself, but they are so tasty and delicious. It’s been ages since I’ve had these, but as I read through the recipe and saw the pics, it brought back very fond memories from my childhood (bottle cap doughnut holes too!). Mama did them with glazed icing on the top or either we filled a paper bag with confectioners sugar and shook them til coated. However you coat them, they are SO GOOD! Welcome, Christy! I’m going to be making these again soon.

Hello! I am thrilled to be guest posting on Southern Hospitality, a blog I’ve frequented since I first began blogging myself! Having had the pleasure of meeting Rhoda at the recent Blissdom ’09, I was not surprised in the least to find her every bit as delightful as her blog. I was thrilled to be invited to guest post, almost as thrilled as I was when Rhoda agreed to guest post for me! Special thanks to Rhoda for graciously sharing her wonderful readers with me for the day. I do hope you’ll stop by SouthernPlate.com and visit with me a spell! 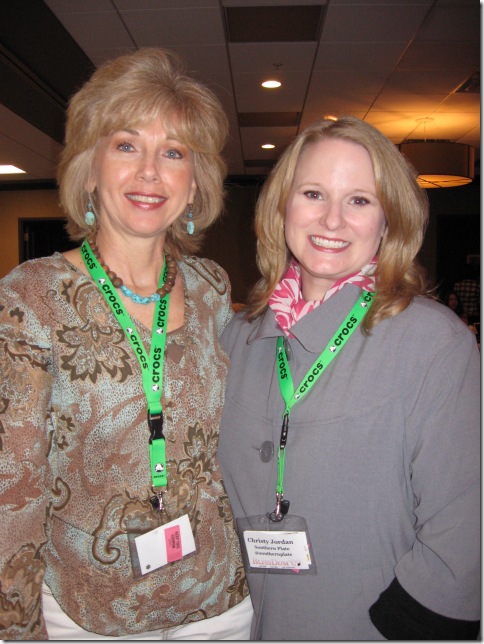 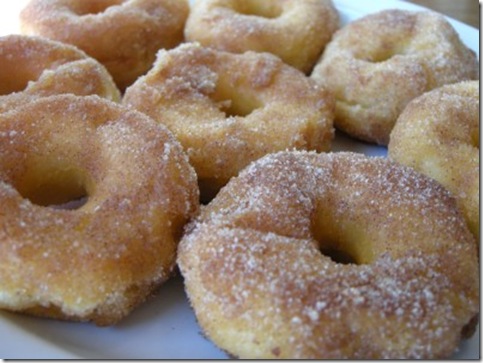 Look at that photo. Is your mouth watering yet? How about if I told you that you could make these amazing treats, serving them warm and golden to your family, with no knowledge whatsoever of yeast or dough, no special equipment other than what you likely have on hand, and have them done start to finish in under ten minutes, including prep time?

I sound like an infomercial, don’t I? I bet you’re half expecting me to cock one eye “ShamWOW! You’ll just say, WOW!”

Seriously though, we Southerners (and humans in general), love our doughnuts. Mama says you always need to drink a diet coke with doughnuts because it cancels out the calories. This is what she and Aunt Sue did the time they were in Gatlinburg, and stopped by the Krispy Kreme. They got one dozen hot doughnuts (the ultimate in luxury!) and two diet cokes. By the time they got back to the hotel, they had eaten the entire dozen! They had the good sense to throw away the doughnut box (hiding the evidence) before they got to the room but then discovered their husbands were waiting on them so they could go out to eat. Still, by then they were stuffed (and feeling slightly ill) and couldn’t stand to eat!

Now one of the great things about these is that you don’t have to run to Krispy Kreme or Dunkin’ and you don’t have any evidence to hide! The most important thing though is that they begin with CANNED BISCUITS! Seriously!! No, they do NOT taste anything like a biscuit when you are done. They taste every bit as melt in your mouth good as they look! 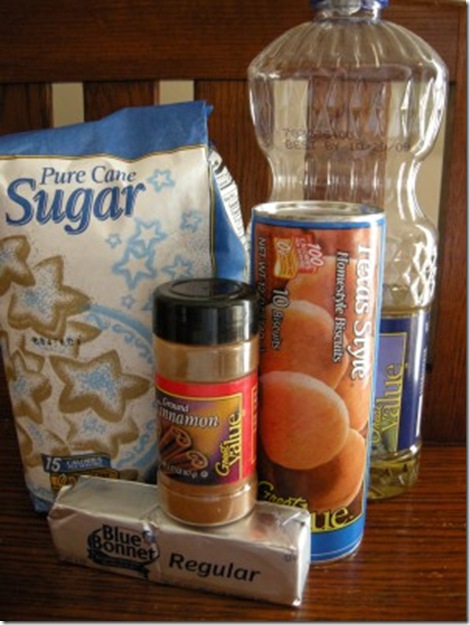 The ingredients are simple and as I said before, you likely have them on hand. You’ll need vegetable oil and canned biscuits for the doughnuts and margarine, cinnamon, and sugar for the coating.

For the biscuits, I get cheapie generic Texas style, but any style at all will do, just don’t get the flaky layers because they will absorb the oil whereas normal biscuits won’t if we get our oil hot enough before frying them. When I was done, you couldn’t tell a difference in my oil level from when I started Now you can go buy a doughnut cutter or some other fancy finagled device (which I actually have tucked away in the dark recesses of my kitchen drawers) but I like to show y’all how to do things the simple way. I’m a big fan of not over complicating a simple matter. For that very reason, we are going to just use a plain old bottle cap to cut the centers of our doughnuts out. I love y’all so much that I drank a Diet Dr Pepper just to have this for you. Oh, the sacrifices I make for my Southern Plate family!! 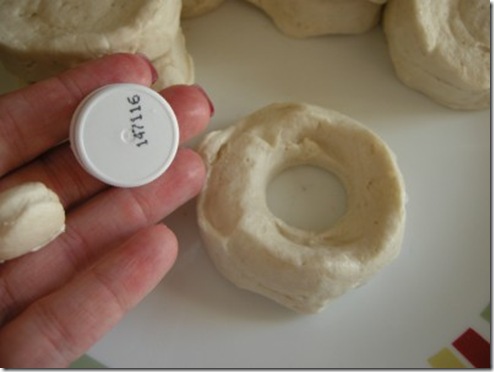 Cut out the holes in every doughnut, reserving them to cook along with the doughnuts. 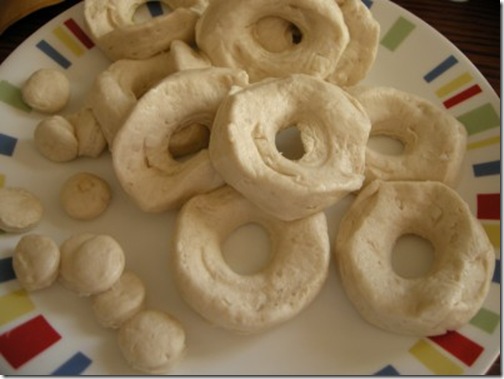 Voila, our doughnuts are done!

These are my every day dishes, which I love. You always remember the dishes you ate on growing up. Ours had little green flowers going around the outside of the plates and my grandmother’s had little blue flowers. When I chose these dishes, I wanted my kids to remember a colorful rainbow. They just seemed happy and reminded me of what a childhood should be like, don’t you think? 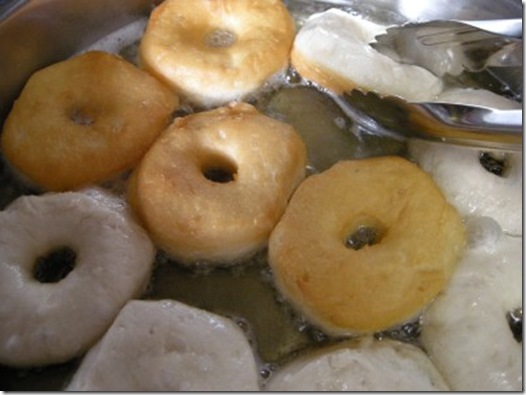 Pour your oil in a skillet. You need a little less than a half inch. Heat your oil on medium to medium high for several minutes. We want it to be hot so that our doughnuts are instantly seared when they enter it. This prevents them from absorbing too much of the oil and being soggy. To test my oil, I put a doughnut hole in it. It should sizzle and bubble around the edges and then you know its hot enough.

Now I put all of my doughnuts in at once. If your skillet isn’t big enough you may have to do them in batches. By the time you have put them all in, some may already be ready to turn. It takes less than a minute for them to be ready to turn over.

This is how they look, nice and golden. Turn them all over and let them cook until the undersides are this way. All in all, this should take less than two minutes. Remove cooked doughnuts from oil and place on paper towel lined plate. Do the same with the donut holes. The doughnuts should have cooled slightly so that you can handle them but they will still be very warm. Pick each one up and dip both sides in melted margarine…Then press them down into the cinnamon sugar on both sides. Repeat with all doughnuts and doughnut holes. 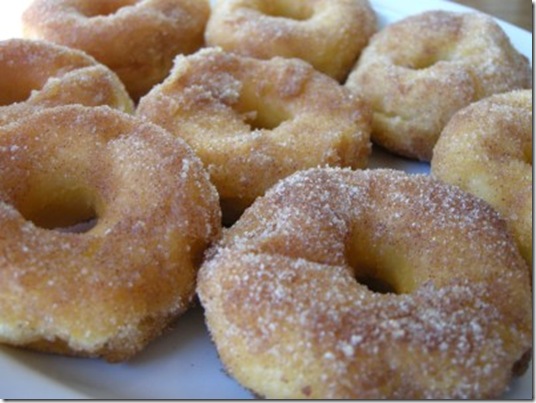 Eat them warm. They will positively melt in your mouth, they are so good!

Melt In Your Mouth Doughnuts (Made With Canned Biscuits!)

1 ten count can Texas style doughnuts (or your preference, just not flaky layers)

Pour oil into skillet to the depth of a little less than 1/2 an inch and heat on medium to medium high for about five minutes. In a bowl, melt margarine. In a separate bowl, combine cinnamon and sugar.

Using a plastic bottle cap, cut the center out of each biscuit. Drop dough into hot oil, watching carefully and turning when golden. Once doughnuts are golden on both sides, remove to paper towel lined plate. Repeat until all dough is cooked, including doughnut holes.

Dip both sides of each doughnut into melted margarine, then press both sides into cinnamon sugar mixture. Serve warm. For the complete post and more pics, click here to see the recipe on Christy’s blog.

Thank you Christy, for bringing back some wonderful childhood memories for me. I hope you will try these with your kids. They will be SO happy and excited to make their own doughnuts, just as we were growing up. Go over and check out Christy’s food blog, Southern Plate! It is beautiful with so many wonderful Southern recipes to try.