After we renovated this house, I realized just how bad the hinges and doorknobs were in this house.  They were antique brass, which I really didn’t mind, but the hinges had gotten primer on them while we were painting and so did the door knobs.  They just didn’t look fresh like the rest of the house did, so I decided to check around and see about changing them out.  My friend, Shannon, passed on an online store that she found cost effective in changing out door knobs, so I checked them out too and was pleasantly surprised to find that I could change out all my interior doorknobs and hinges for around $160.  Not bad!

I chose Antique Brass finish on them all, cause I really like the look and didn’t want oil rubbed bronze since my doors are so dark and they would blend right in.  Levers are also nice to have as we age to help with opening those doors. 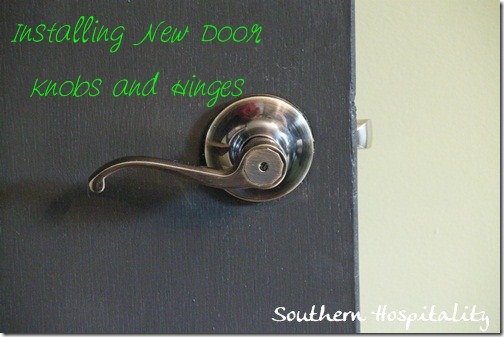 So, I’m going to share how I did it!  It’s really not hard, just takes a bit of time. 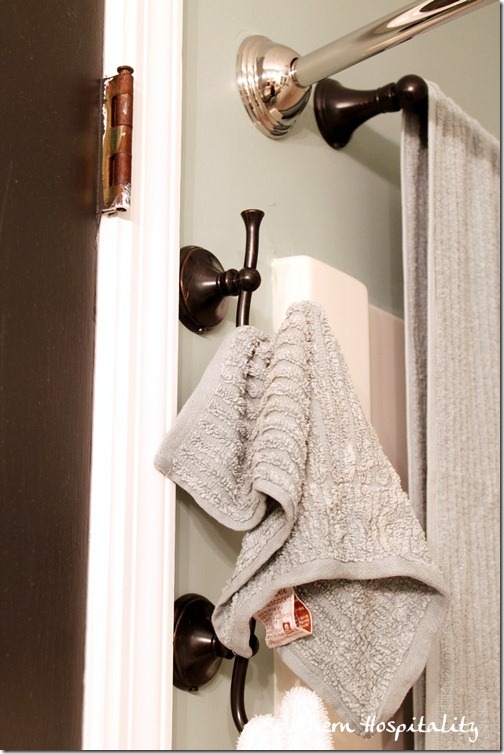 You can get a look here at the existing hinges.  Many had primer like this and some were rusted as well. 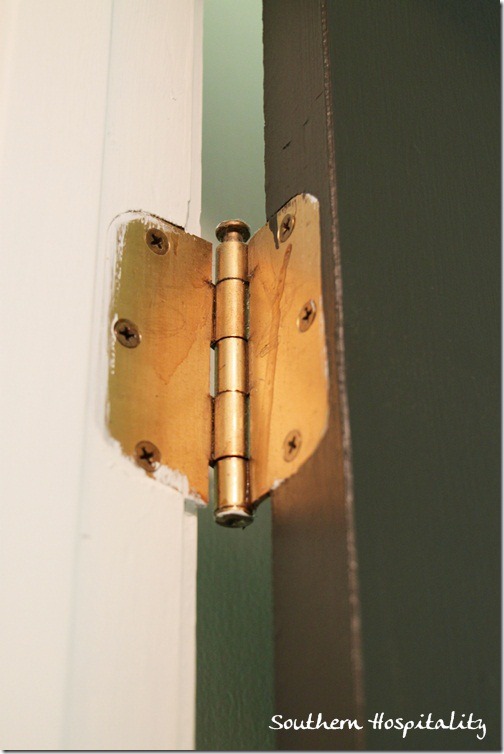 Here’s another look at the hinges.  It was going to be impossible to get all the primer off these hinges, not to mention the doorknobs didn’t all match either, I had a mix of antique brass with one shiny brass.  I really needed and wanted to start over and get all new lever doorknobs and might as well change out the hinges while I was at it.  New hinges are very cost effective. 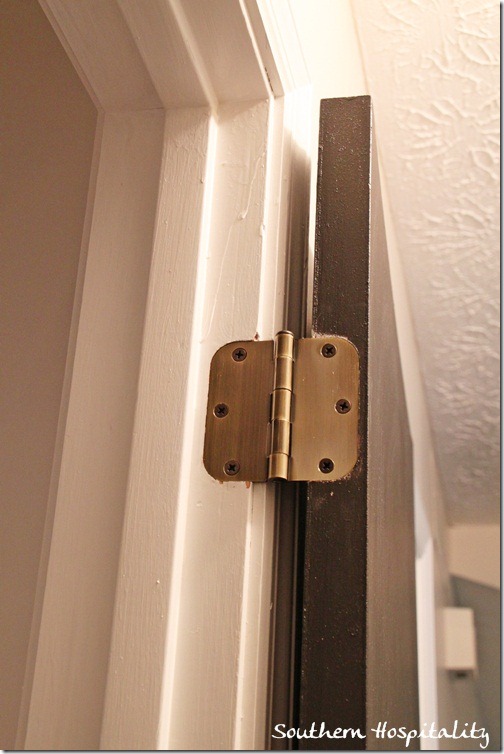 Here’s a look at the new hinges and I’ll share how easy they are to change out.  Make sure you get the same exact hinges that you already have on your doors.  These apparently don’t change over time, since I’m sure my doors original to this 1979 house and some of the standard hinges they sell now are still this same size with 6 screws.  At first, I thought I might have to take the doors off to change out the hinges, but no, you don’t.  My friend, Jill, shared how she had changed out her hinges and you just do it one at a time and nothing will come crashing down.  Unscrew the old hinges and then place the new one right back in the same slot and screw it all back in.  You will definitely want to have a cordless drill for this, that makes it so much faster.  It took me the better part of a day to change out all of my hinges and doorknobs, but well worth the effort. 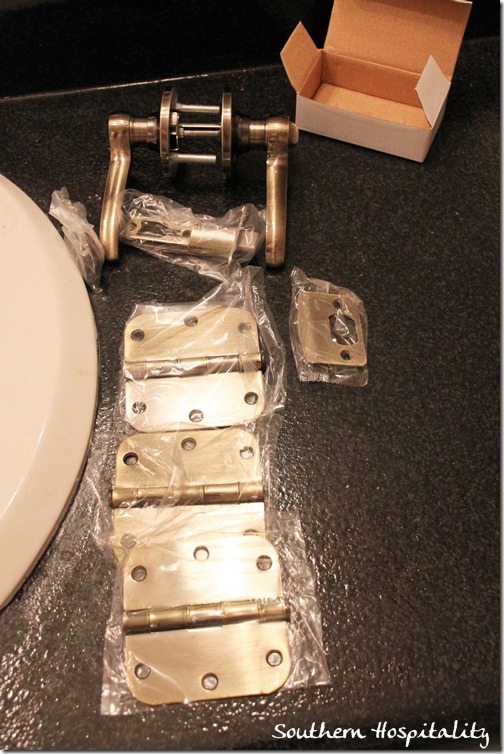 When you get your new doorknobs they will come with all the screws and plates you’ll need, including the strike plate, which is that piece that goes on the door facing to catch the latch on the doorknob.  Hinges are sold separately, so count up your doors (x3) and order your hinges accordingly. 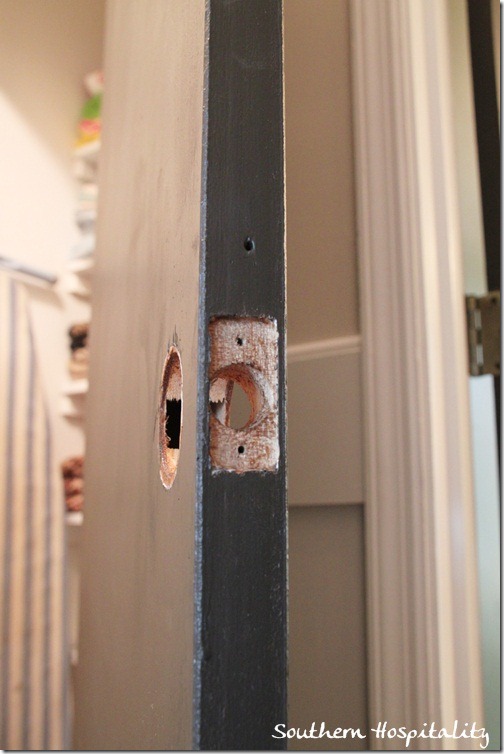 I went around the house and one by one changed out all my hinges and then tackled the doorknobs.  Take out the screws on the old doorknobs and they will slide out of the hole. 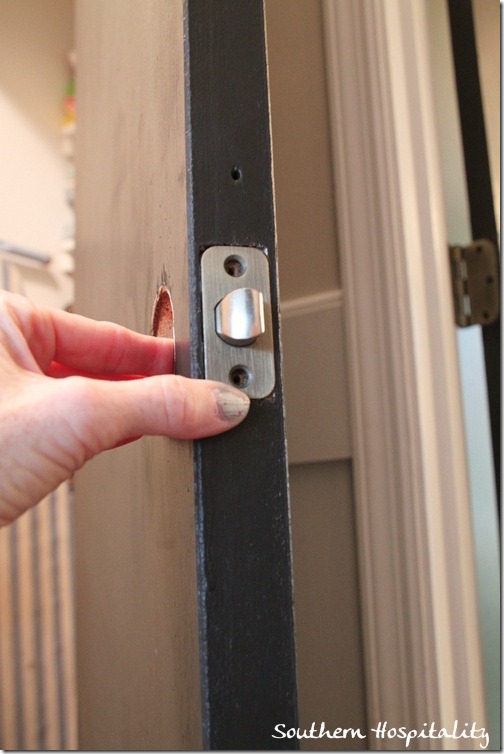 Place back in the new plate  on the edge of the door and screw that in with 2 screws provided.

Here’s a tip for you:  Make sure you point the rounded edge of the little latch towards the strikeplate on the other door facing.  You’ll find out (as I did) that if you put it in opposite, the flat part will not catch the door.  The rounded part has to be pointed towards the other door frame and then it will catch on the strikeplace and hold the door closed.  Make sense?  It will when you try it.

Also, there were a couple of doors that I had to move the strikeplate up or down slightly so that they would catch correctly.  One I even had to slightly chisel out a little more wood to make it catch.  So, just be aware that even though the parts are exactly the same size as the old, you may need to adjust a little to make it all work.  But, I got all of mine working perfectly. 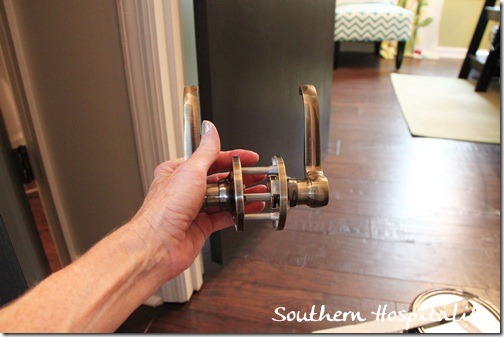 Once that face place goes in, then it’s time to put on the levers. 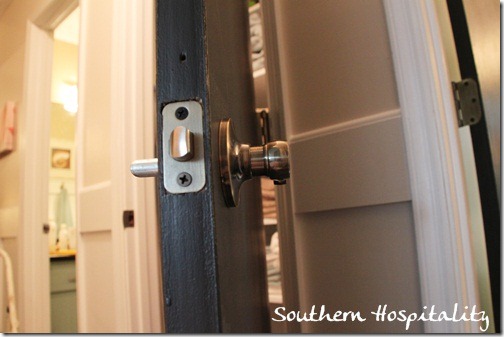 Place the locked side in (if you are working with a lock) and place the non-locking side of the lever outside the door. 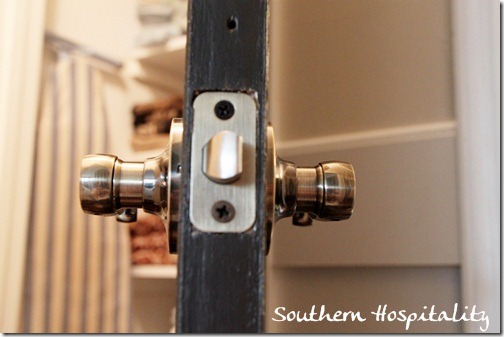 They will lock together and then you simply screw the 2 screws back in place and the door lever will be set.

Also, another tip on left handed levers vs. right handed.  They can be switched really easy, since there is an Allen wrench included with every lever.  I pointed the levers down (kept trying to figure out the right direction, but it was pictured down in the drawing), so if you have a door that swings the other way and you need to change the lever direction, all you do is unscrew a tiny screw in the round part with the Allen wrench, slip off the lever and turn it over and insert the screw again.  Easy, after I finally got that part figured out.  The drawing didn’t mention that part. 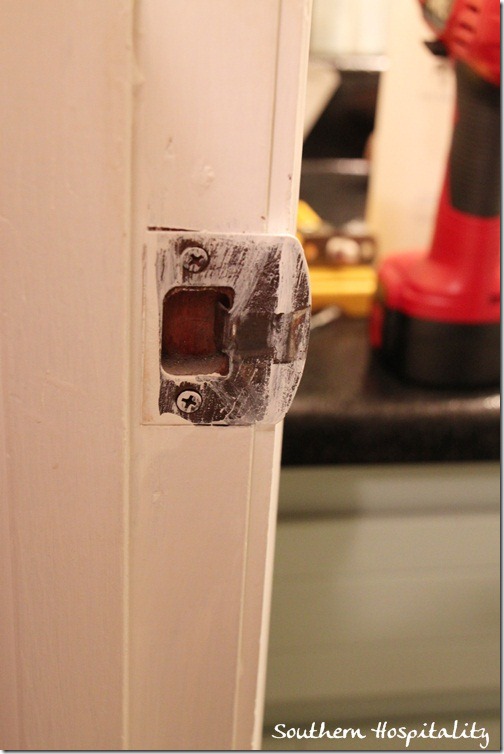 Changing out the strikeplate is simple too.  Take the old ones out and insert the new one. 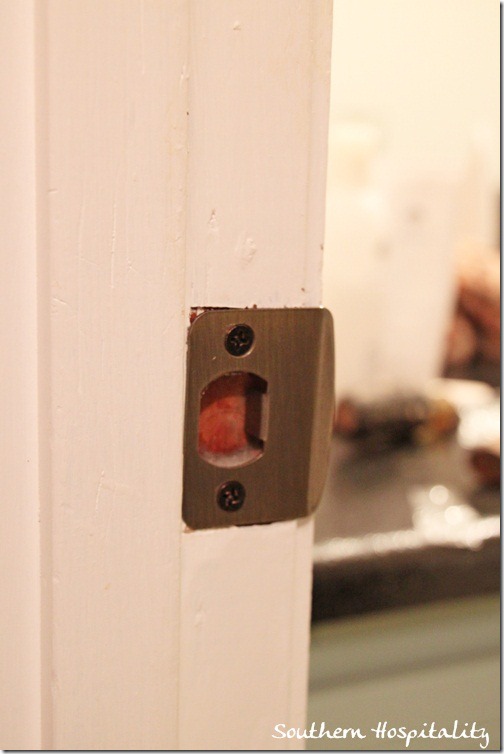 Like this!  Make sure the door latch catches properly and then you are done. 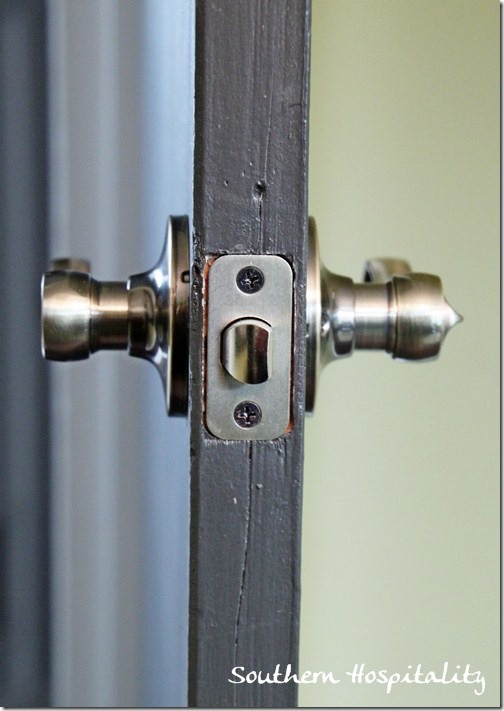 I was so happy to get this little job out of the way and my new antique brass door levers look so fresh now.  This might not be a new house, but I’m making it look as good as it can.

I purchased my new door levers and hinges online at  EBuilder Direct.  They have no clue I’m blogging about them, but I’ll give them a shout out because I liked the price of their products compared to the big box stores.  New door levers would have cost twice this at the other stores.  These antique brass levers are the ones I ordered  ($160 for all, but I only had 9 interior knobs to change) and I couldn’t be happier with the quality and price of all of these products. 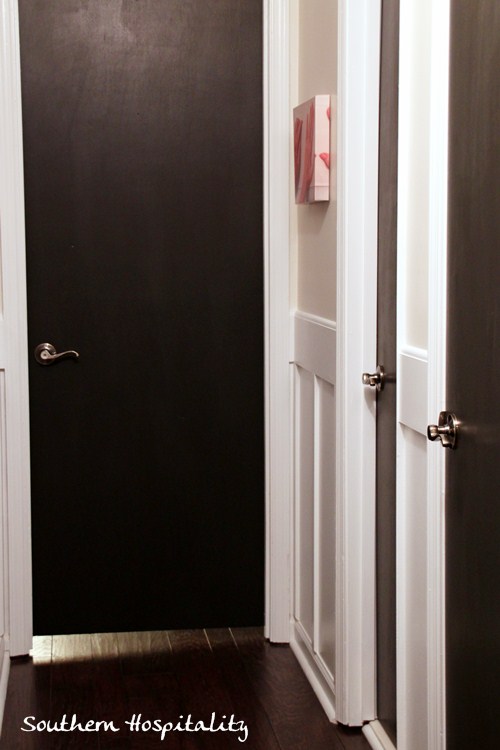 Just wanted to share how easy it is to change out old hinges and door knobs.  If you’ve got some less than desirable doorknobs and hinges, you can change them out for not a lot of effort.   Someone asked to see a pic of the hallway, so I’m adding it above.  It was hard to get all the levers to show up, so I showed 3 of the doors off the hall.

I’m so happy to have this one done!