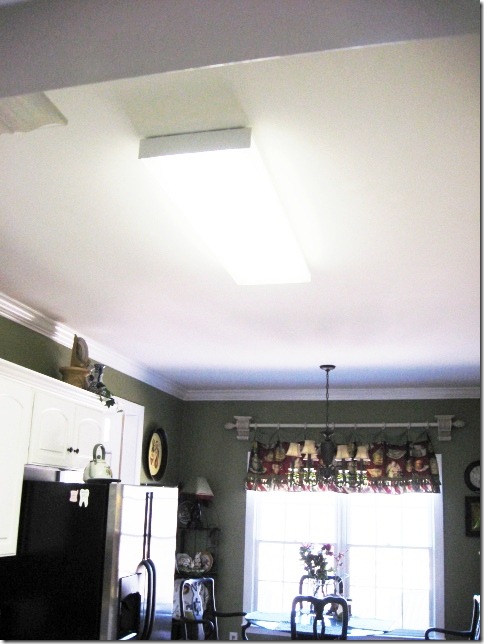 I’m such a firm believer that lighting makes a big difference in a home. Did any of you inherit one of these lovelies in your kitchen? I’ve been eyeballing this thing for 3 years with plans of one day getting rid of the white box. Hate these things! I guess the only thing they are good for is they do put out a lot of light, but they sure are unattractive. I had my eye on one of those pretty track lights with adjustable spotlights. I think they are pretty neat. 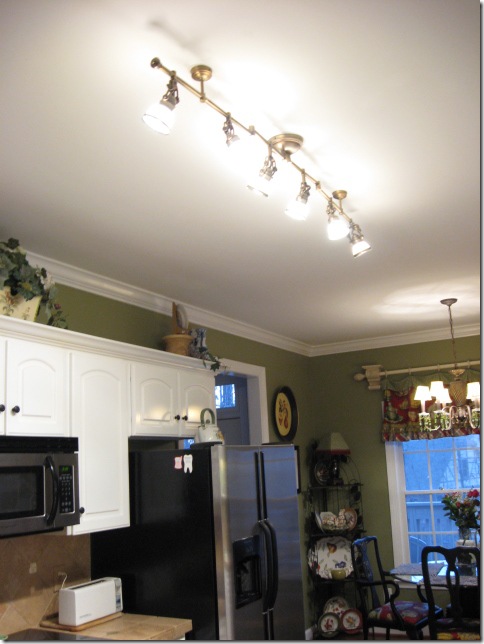 So, when I found a deal last week at Lowes, I jumped on it. I had to be a bulldog about it, but I got the deal. I was in one Lowes store and saw these on clearance for $69.50. Of course, they had no more, only the display model was up there. He looked on the computer and saw that another store not far away had a couple in their stock, so he gave me the phone number to call. I did call on my way out of the store and the other store told me that they are not obligated to match a clearance price from another store. I couldn’t believe that policy! He told me I could come by and check it out and to at least ask, but didn’t give me much hopes of getting the clearance price. Regular price was $150.00, way more than I wanted to pay. So after checking in at the store and asking again about matching the clearance price, at first I was told no by the department manager. I insisted on talking with another manager behind the Customer Service counter. He asked me what I was looking at, so I went and showed it to him. He brought it back up to the counter and checked in his computer and told me HE COULD MATCH THE PRICE! Yippee! I was pretty excited. 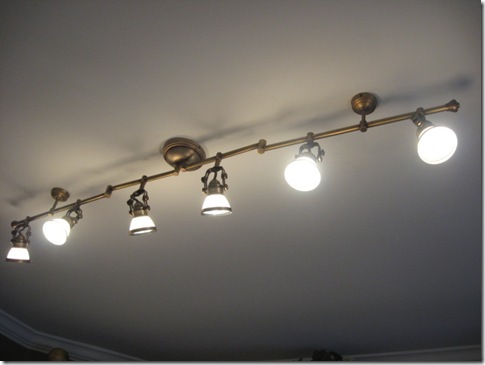 So, I took it home and proceeded to install it the next day. Wherein my hubby came in to help me hold it up as I was trying to put the screws in and I’ll just go ahead and tell you that I dropped the teeny tiny screw 4 times and the 4th time it went down the heat vent. See, my projects don’t all go perfectly smooth, so you can feel better about your own now. Hubby shook his head, called me Blonde, and left me to it as I scrambled to find another screw that would fit. I found one, got it installed and I’m a happy girl! The old white box left 2 holes on either side of the main box and I had to caulk them with caulking, but luckily the 2 side mounts covered most of it up, so it’s really not noticeable after I touched it up with white ceiling paint. 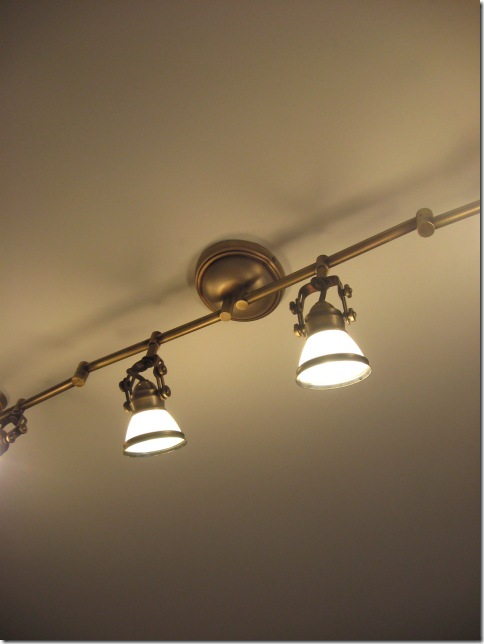 It’s an antique brass finish which looks perfectly fine with the hanging chandelier in here that I got at a yardsale. And I love those little swivel heads on it that can be moved all around the kitchen. It’s a bright white light which is great for task lighting. 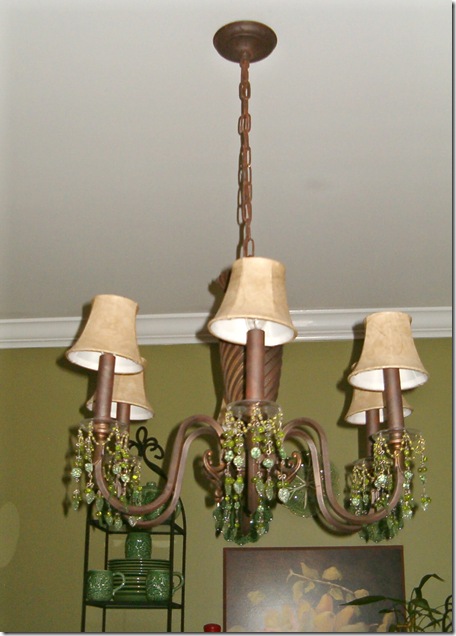 Hubby’s response to the new tracklight was not all that enthusiastic (he thought the old one was just FINE) and his first question was, how much are those replacement light bulbs going to cost me. Ha! I’ll have to find that out next time I’m in the store. Men and women sure have different ways of looking at things, don’t they? 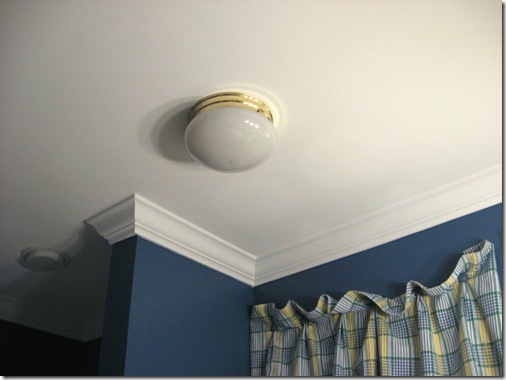 I then moved on to the master bath and I’m happy to say, that all the light fixtures are now completed, including 2 of these. Aren’t these about the ugliest things you’ve ever seen? We live in a nice 10 year old house, but the fixtures these builders put in leave a lot to be desired. After 3 years, I’ve finally changed them all out, many from yardsales and a few on sale at Lowes, so I did get some great deals. Every single builder’s brass fixture is gone now and none too soon for me. 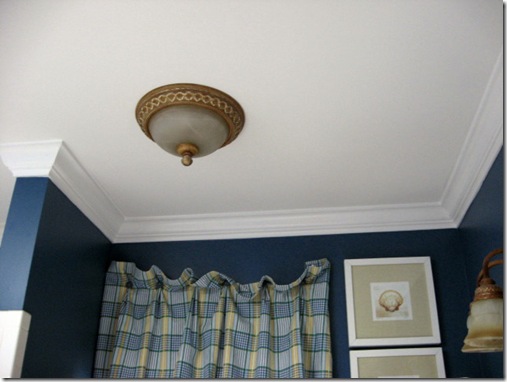 Ahhh, much better! I had already bought the over the mirror fixture below, so now they all coordinate. These are not overly expensive fixtures (from Home Depot), but work just fine for me. If you’re patient, you can find some good deals out there, just keep your eyes peeled. 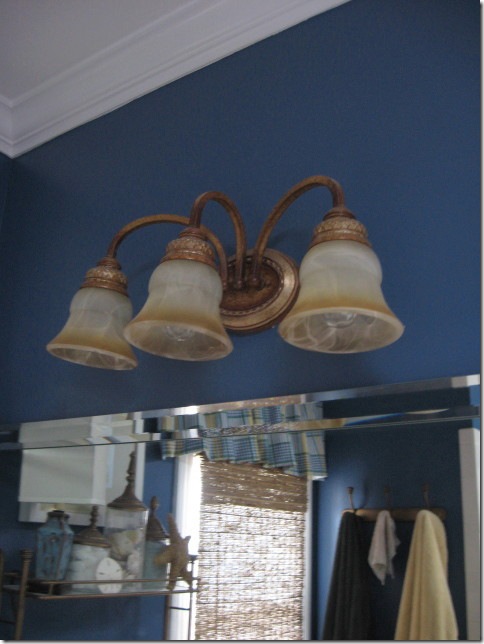 And speaking of the kitchen, I have other exciting news. I’m finally getting granite countertops! We’ve currently got tiles in the kitchen and after 3 years, the grout is looking pretty rough. I’ll do a kitchen post soon and we’ll talk about countertops. I want to hear what all of you have too!

Since this is a before and after post, I’m going to participate in Susan’s Met Monday, so go and check out all the other inspiration from her blog today, Naps on the Porch.

Birmingham Girls: Check out the post below about our Saturday flea market adventure next weekend!

I’ve also got another special guest coming by on Wednesday for a fun post, so be sure to stop back by. I think you’ll love this girl!