Not being raised in Birmingham, I knew nothing about The Club, until recently when Peter and I were treated to a nice lunch out at this swanky place. Situated high up on Red Mountain overlooking downtown, The Club is a paragon of prestige and old-Southern traditions. The sort of place I didn’t grow up going to. So how did we end up at this place? Well, that’s a whole ‘nuther story all its own. 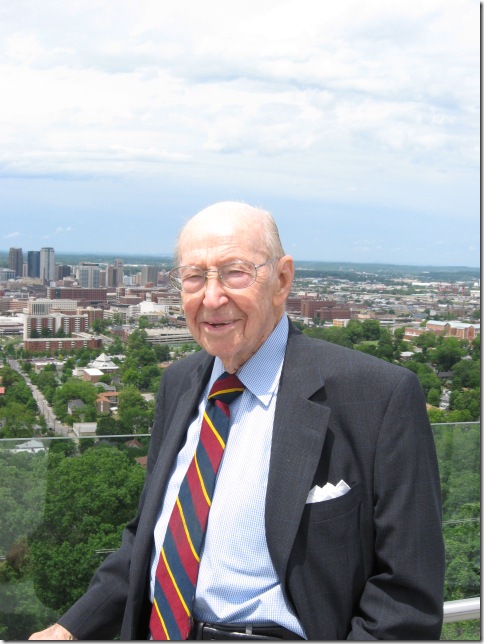 Meet Mr. Jack. One of my readers (and now friends) Kaye from KK’s Creations (who also did the giveaway with me at Engraved Euniques), lives in TX and she had told me that her father-in-law, Jack, lives here in Birmingham and has for many, many years. Since 1935 we found out. That’s certainly a long time. Kaye mentioned that she would love for me to meet Mr. Jack and that since he and his wife were moving to a new garden home, could perhaps use my decorating help. So, I called up Mr. Jack and we talked on the phone. He invited Peter and I to lunch and this is where he took us. Mr. Jack is 99 years old, which is remarkable in itself. He’s so spry, witty, and personable and we had a delightful time having lunch with him and listening to his very interesting life story. He still drives, but Peter and I drove to The Club.

Oh, and the best part is, when I first talked to Mr. Jack on the phone, I asked him if he knew Peter’s grandfather, also named Pete. He did, they were friends for many years, in Kiawanis together and had a lot of friends in common, which was really cool. They were very close to the same age. Peter’s Pappy passed away a little over a year ago at the age of 97. 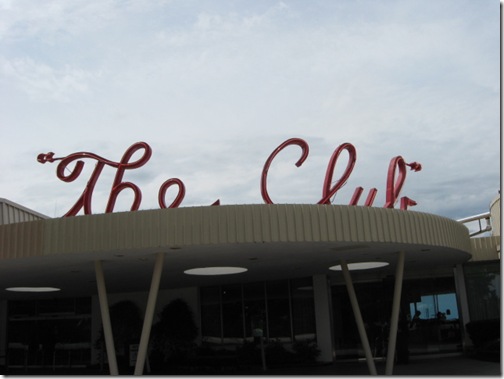 Now, apparently the club was built in the 1950’s. Can you tell that from this sign. 🙂 You can imagine just from the shape of the building what it looks like inside. This place would be a great movie set. A throw-back to simpler days, a dinner club, a place to play cards, a place to dine and dance. Like stepping back in time to the 1960’s. Apparently Peter’s other grandfather, known affectionately as Big Daddy (Grandma Eleanor’s husband), used to take him to The Club when he was about 8 years old. Peter grew up in Mountain Brook from the ages of 2-9 and then moved away from Birmingham after that. And now we are back. 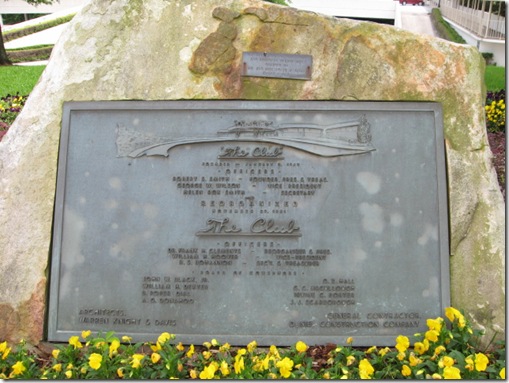 So there you have The Club. Oh, and they pronounce it THE Club, like V Club, that’s how it sounds when you hear it. I had to laugh at that. I was calling it Tha Club, but apparently that is not the way to say it. A couple of my friends who had been there before also told me that and I noticed that’s the way Mr. Jack said it. And another thing, you have to wear a coat and tie for lunch to sit in the special section. Needless to say, Peter wasn’t wearing a jacket, so we were escorted to a nice section, just not the best for the viewing. But, that was OK, it was great anyway. There was a ladies fashion show going on when we arrived and I didn’t take any pics of that or the inside. They might not have wanted their picture on my blog. So, we had a terrific lunch, with the best orange rolls I’ve ever tasted in my life. I had 2 of them and was raving over how good they were and Mr. Jack had the waiter bring me a whole pile of them in a to-go box before we left. Oh yeah! 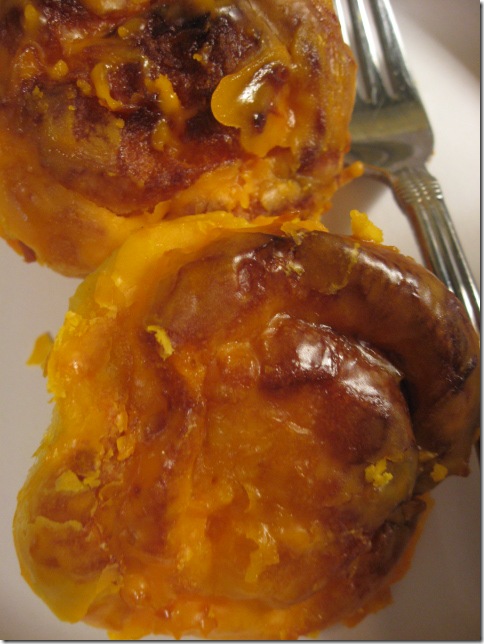 We ate on them for about 3 days. They were great with my morning coffee. Just got a link for the recipe for these fabulous rolls, if you’d like to try them at home. I think I might have to break down and actually cook something with yeast now. I usually avoid cooking anything with yeast at home, just cause I have never done it. 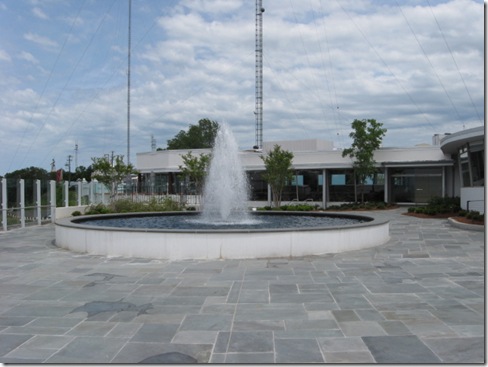 After lunch we walked out to the large patio and took in the enormous view of the city from this prime location. 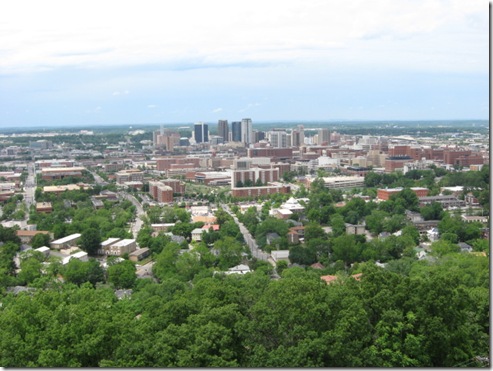 Birmingham has a beautiful downtown. 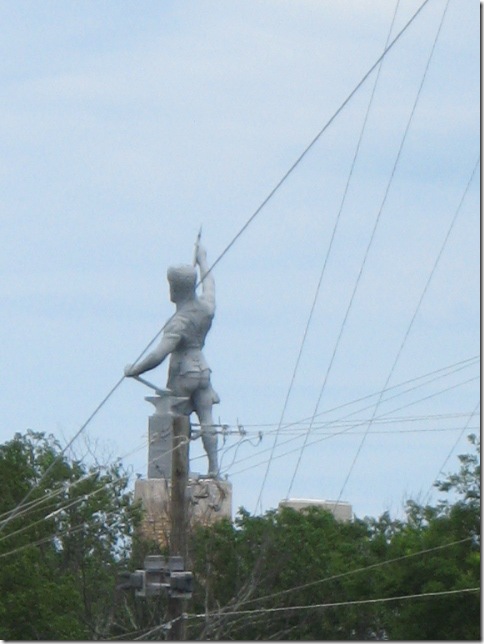 And there’s a great angle of Vulcan (hello heiny!), our tribute to the steel industry high atop Red Mountain. There are many radio and TV towers up here too since this is such a high altitude. 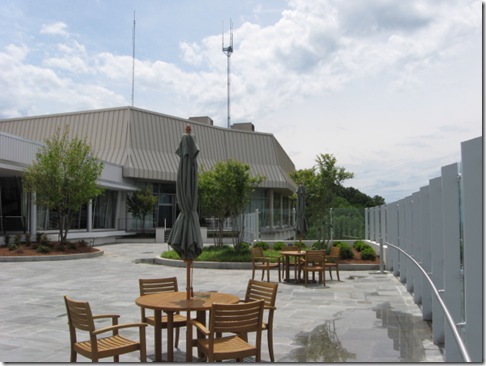 We heard they have done extensive remodeling in recent years to bring it up to date. I didn’t take pics inside, but it’s very nice. Ladies were sitting around tables playing bridge that afternoon. 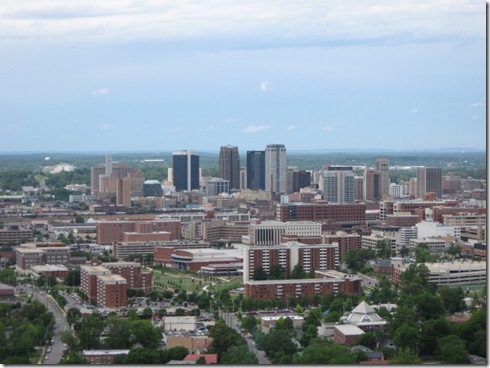 I really enjoyed seeing it. Hopefully, we’ll go back to THE Club another time. 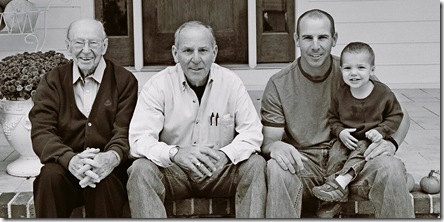 Kaye shared this pic on her blog of Mr. Jack and offspring. She calls this pic the 4 Jacks. All 4 named Jack, 4 generations. I think this is the sweetest pic. They all look alike!

Mr. Jack still works and has multiple engineering degrees. Graduated from the University of Alabama (Roll Tide!) and still draws and works with his son in town. Now, that is remarkable! We all could only hope to still be as active as he is at that age.

So, if you get a chance to have lunch with a 99 year old, do it. These wise old souls are a wealth of knowledge and history and we’d all be smart to listen to them. Kaye said she will invite us to Mr. Jack’s 100th birthday party and I’m looking forward to that next January.