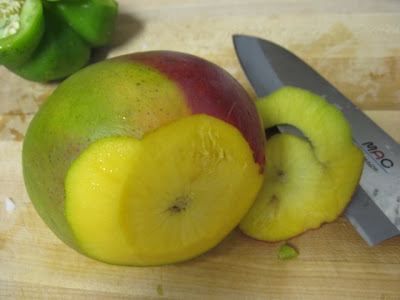 Have you ever made mango salsa? I had not until last summer when I noticed mangos were in season. I’ve seen some recipes done on the cooking shows before, so decided to try it myself and home and guess what? It’s delish, really good. Something about the flavors of the mango, cilantro, oil & vinegar mixture is great. Goes really well with pork and probably chicken too. Since mangos are coming in season again and are on sale, I bought one recently and fixed this wonderful side dish. 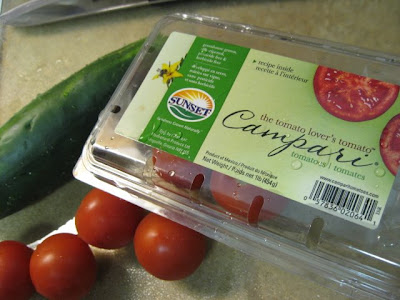 I made a side salad with these yummy tomatoes which I only buy when they are on sale. Have you see these yet, they are called Campari and another package said Omorosa, grown in Mexico. They are great tasting tomatoes for store bought. I usually buy grape tomatoes, but these were the same price last week at Publix. They are about 4 times as big as grape ones. 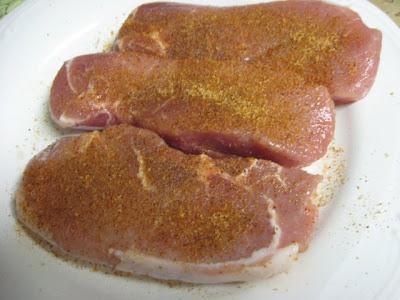 Pork chops on the George Foreman, seasoned with a little Tony Chachere’s. 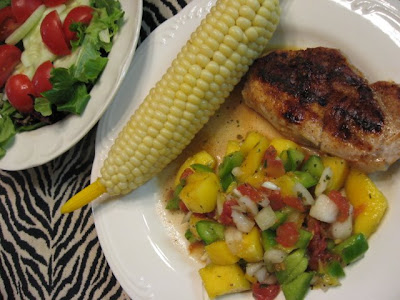 Corn on the cob is coming in at the grocery stores too for a good price, so I always buy it when it’s in the shuck and fresh. Love the white kind, since I grew up on Silver Queen corn that my dad grows. This looks yellow, but it’s really the white variety.

As usual, I took some liberties with the recipe and instead of chopping the tomatoes, I used a can of Rotel tomatoes with cilantro and lime added. I didn’t get the red bell pepper, but green. And I used apple cider vinegar instead of the one he listed. His recipe was double this, so I pared it down for a smaller amount.

All these flavors are great together, so try this if you get a chance!

I’ve got some fun things to share from my Florida trip and will do that again next week! It’s great to be home.