Mark is a sentimental guy which I’ve shared before, but this post will really cinch the fact that he truly loves his childhood memories and the roots from which he came. Today I’m sharing a post from Mark about his favorite childhood toys and the fact that he saved them all these years. He’s sharing all about the curio table so enjoy this post from Mark. Once you finish this, I’ll narrate the table and how it was put back together along with the wallpaper we added to the bottom. 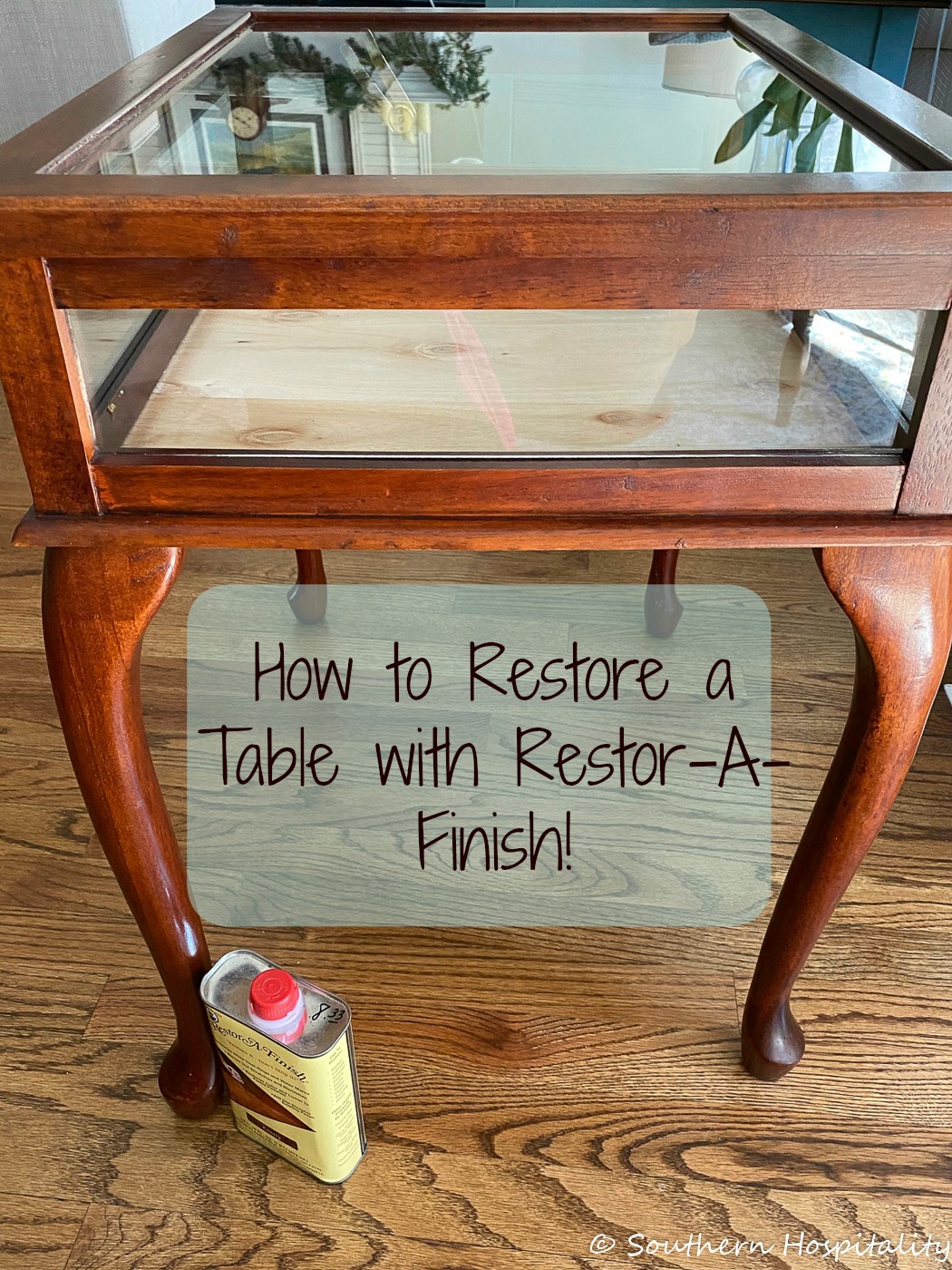 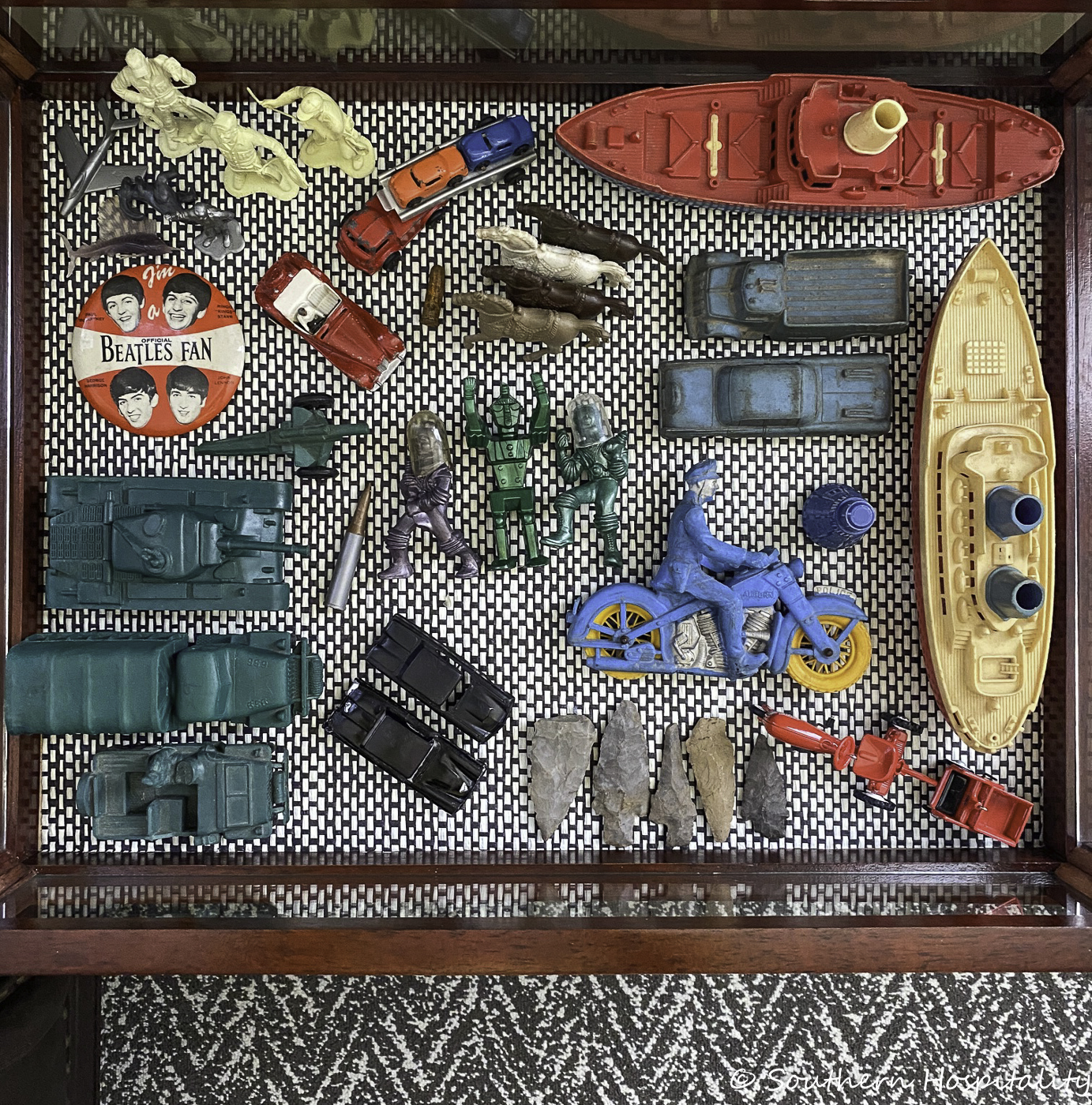 The next day I took the table up to my room and took all the toys out of the box where they had been waiting and arranged them so they could all be seen.  Rhoda asked me to talk about the toys and my memories of them (you can find the video of that day in my Instagram Stories if you want to hear Mark talking about them, saved under Mark’s treasures in Stories).
Some of these toys, like the two ships I can remember playing with in a rain puddle when I was less than three years old.  Several of the cars, truck and motorcycle policeman are rubber, made by the Auburn toy company.  The two blue vehicles by the boats my mother bought for me when I was three or four (I can still remember the store); the army trucks and tank I got for my birthday in Clayton, GA where we used to stay at a B&B called the Bynum house.  The black cars go back to the first grade when our teacher let us bring toys to school one day; the cream-colored men are lineman from a telephone truck set I got for Christmas in 1959, the truck is gone but the men made it into the drawer.  The horses are from a Roy Rodgers set, the cowboys are long gone.  The bullet in front of the horses came from my Roy Rodgers gun belt (I still have the holster and gun, but they are too large for the curio table).  The toys above the Beatles pin are premiums from cereal and Frito Lays Fritos packages…one of them, the dinosaur, got me my first spanking in a grocery store…I swear I didn’t steal it, somebody already opened the package and the dinosaur was lying there…I just picked it up…finders keepers…I was a kid…scarred for life!!! Took me years to ever eat Fritos again  The arrow heads are from my family’s garden in Lawrenceburg, Tennessee. Whenever my Great Uncle would plow his field he would find them and send me some.  The red HallMark tractor and trailer are not that old.  I bought them and put them in here in tribute to my first set of wheels which was a Murray Tractor.  I turned it into a hot rod at the age of four or five and nearly killed myself when I removed the steering support because it looked way cooler without it.  Gravity…it hurts.
All that for a little curio table full of items of little value to anyone else, but once considered treasure by a small boy now separated by sixty years from his older self who still thinks they are priceless and is so grateful for that hidden drawer. 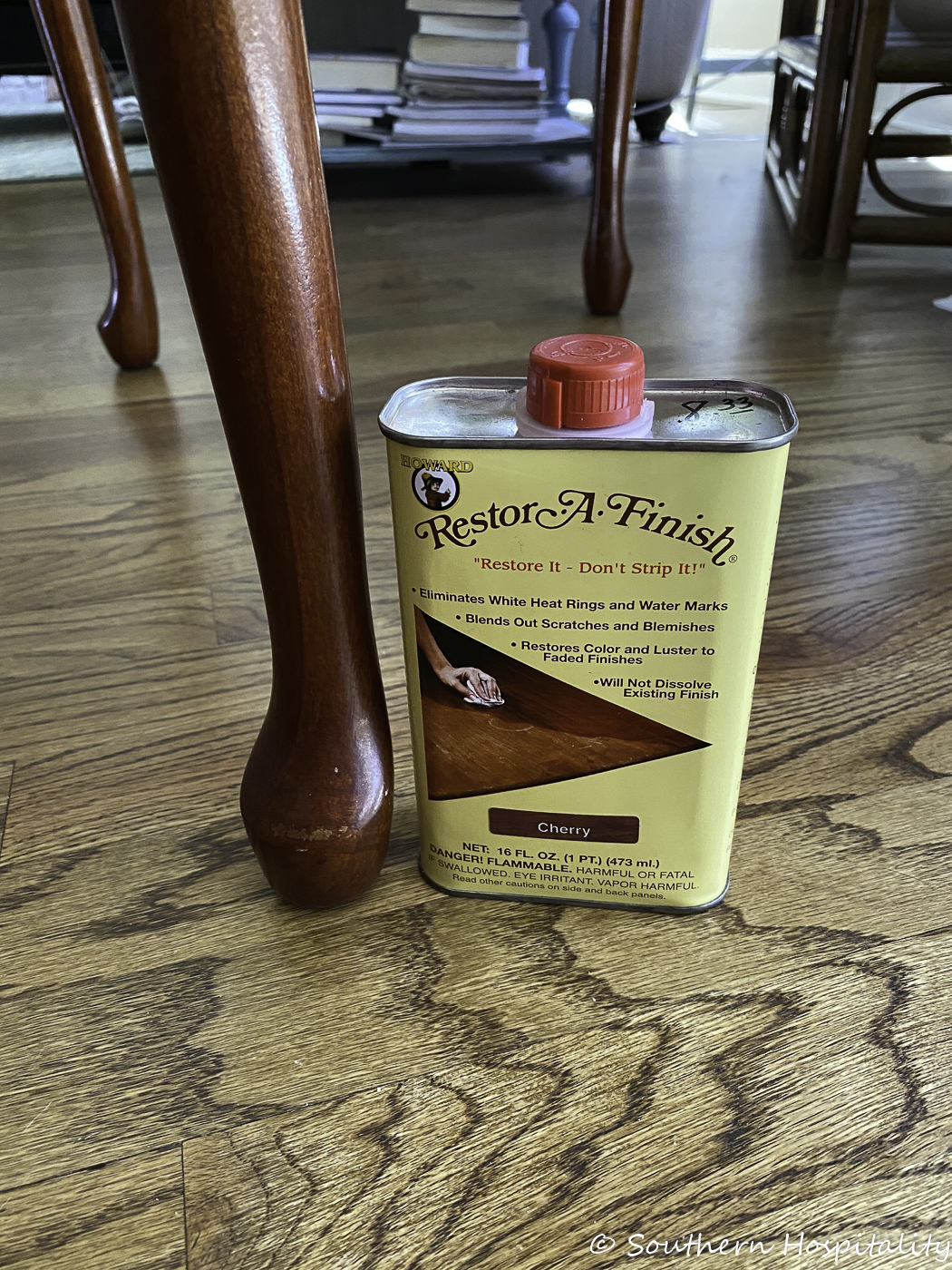 Didn’t you love Mark’s story? Read on for how he refinished the curio table and made it a haven for his boyhood treasures.

I spotted this Queen Anne style curio table about 3 years ago on Facebook from a friend of mine in the Atlanta area. I knew Mark wanted a curio table to house his collection of childhood toys so I showed it to him, we went and picked it up and he bought it for $25. It was definitely in rough condition, the legs had been glued on with Gorilla glue and there were scuff marks on the legs. Lots of nicks and scratches from use. The legs needed immediate attention, so he unscrewed them all and got off the Gorilla glue residue, cut a new piece of plywood to attach under the table so the legs would have something to screw into and fixed it all up, good as new. I gave him my Restore A Finish which worked great on the table. I didn’t get a true before pic of the table, but this is after using Restore A Finish on it. He was very impressed with how this product works. If you have something with light scratches this stuff is great and giving an old piece new life. I didn’t get a good before pic with the legs off and him working to get it all put back together to make it sturdy again, but it was a process to fix it and get it like new again. He did a great job though!

Here’s the Restore A Finish in all colors at Amazon (affiliate link): 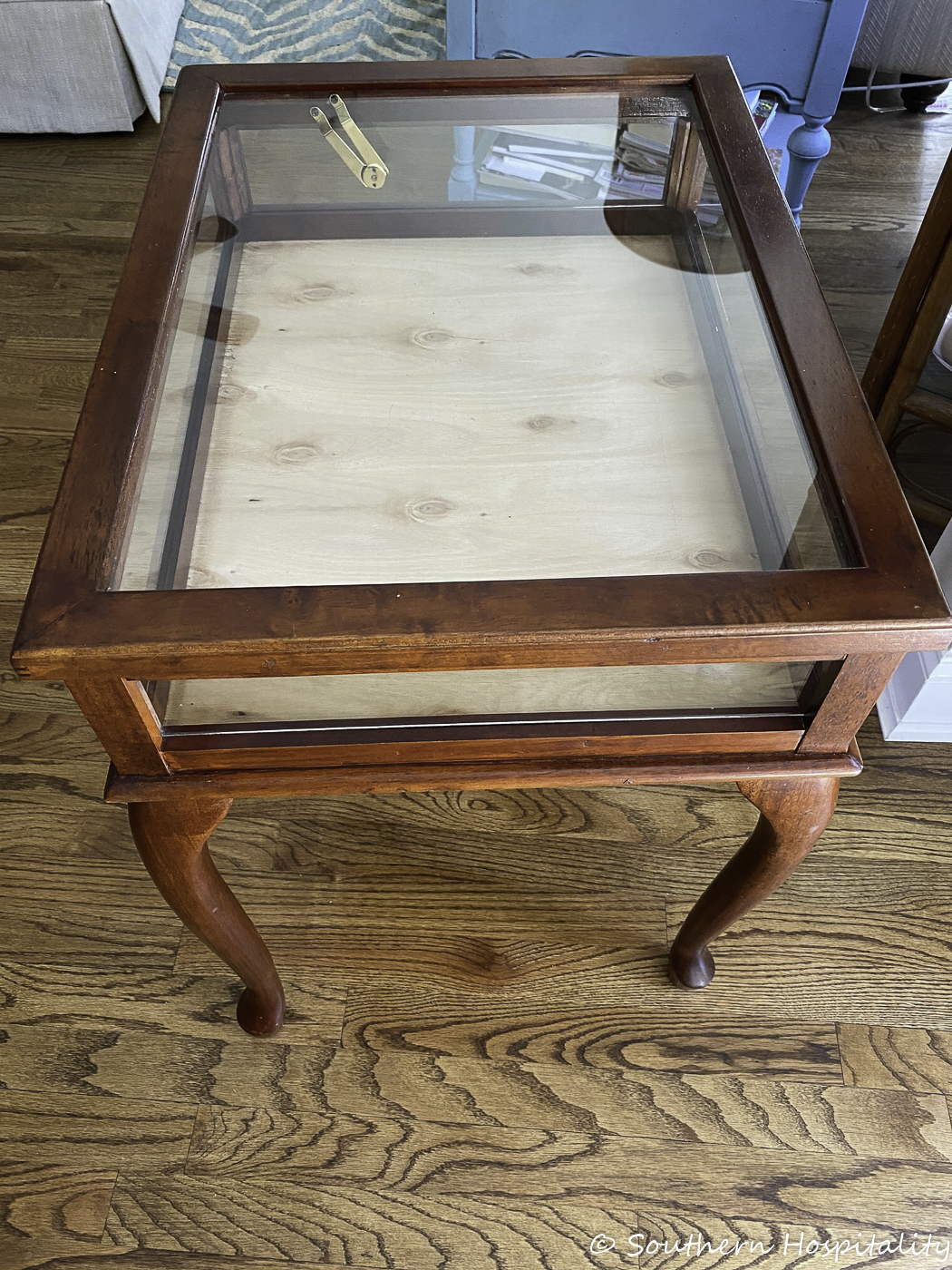 He went over the whole piece with the finish and it covered all the scratches and dings so well. The new plywood base was perfect for making the table more secure. 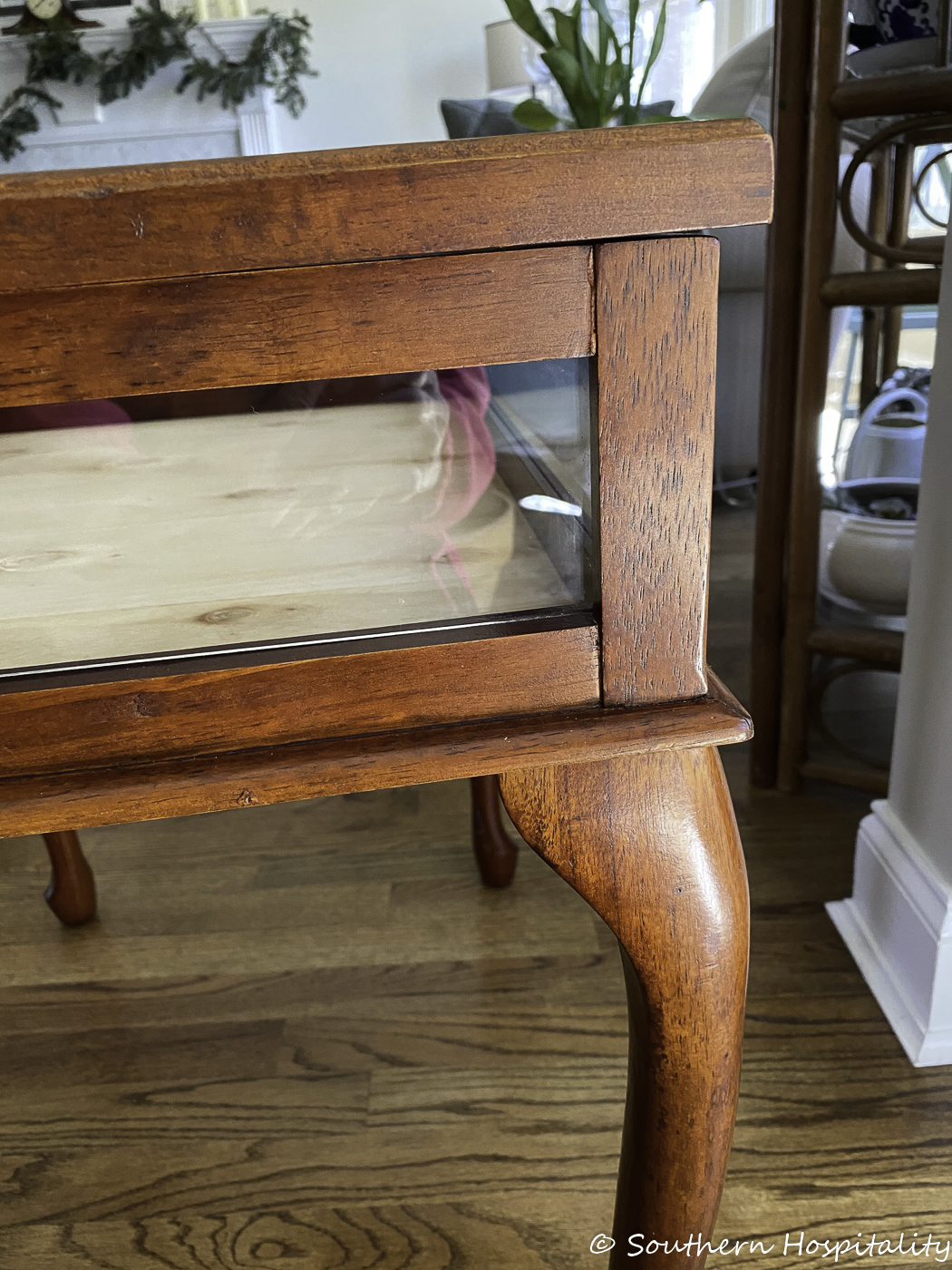 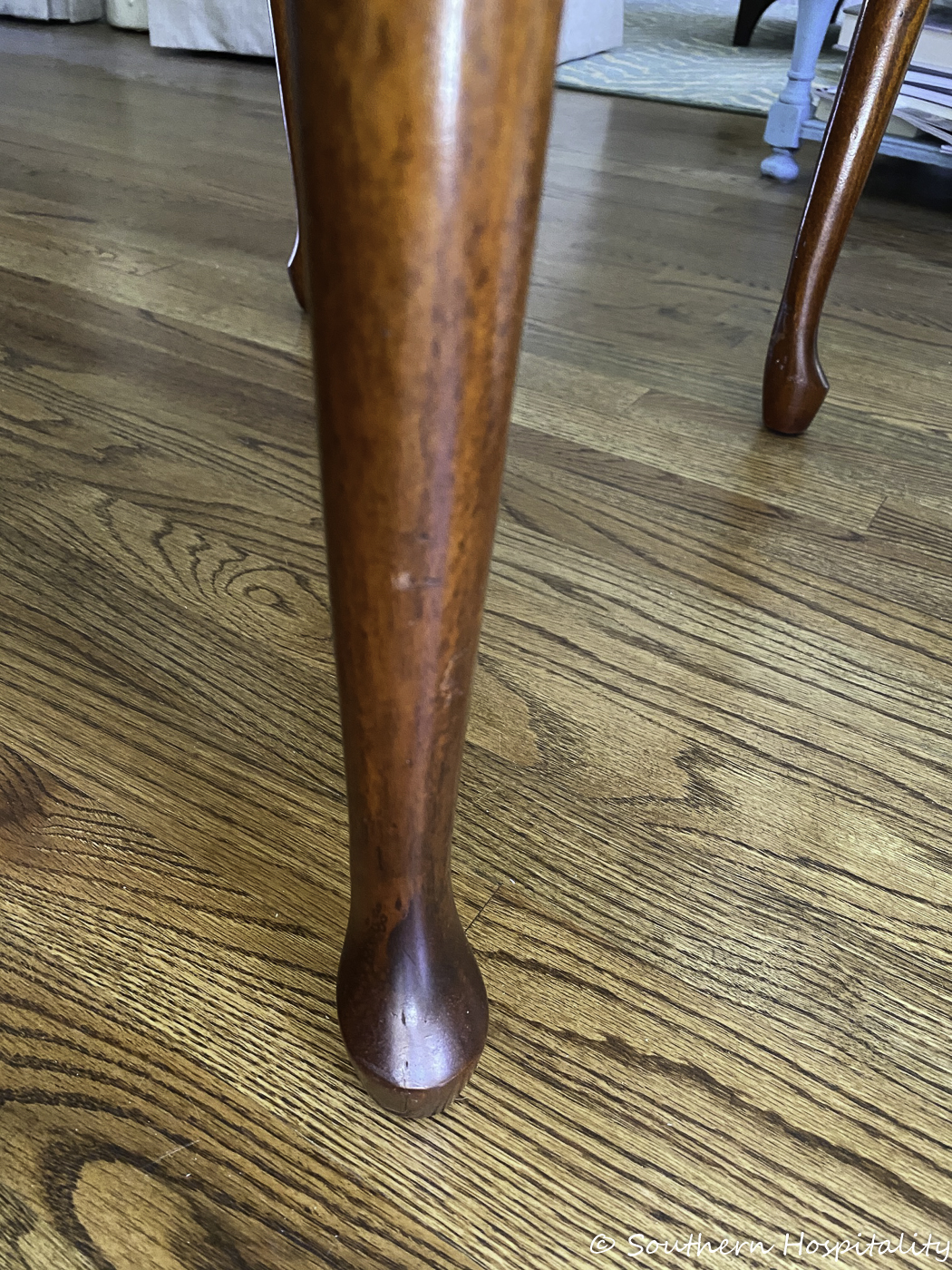 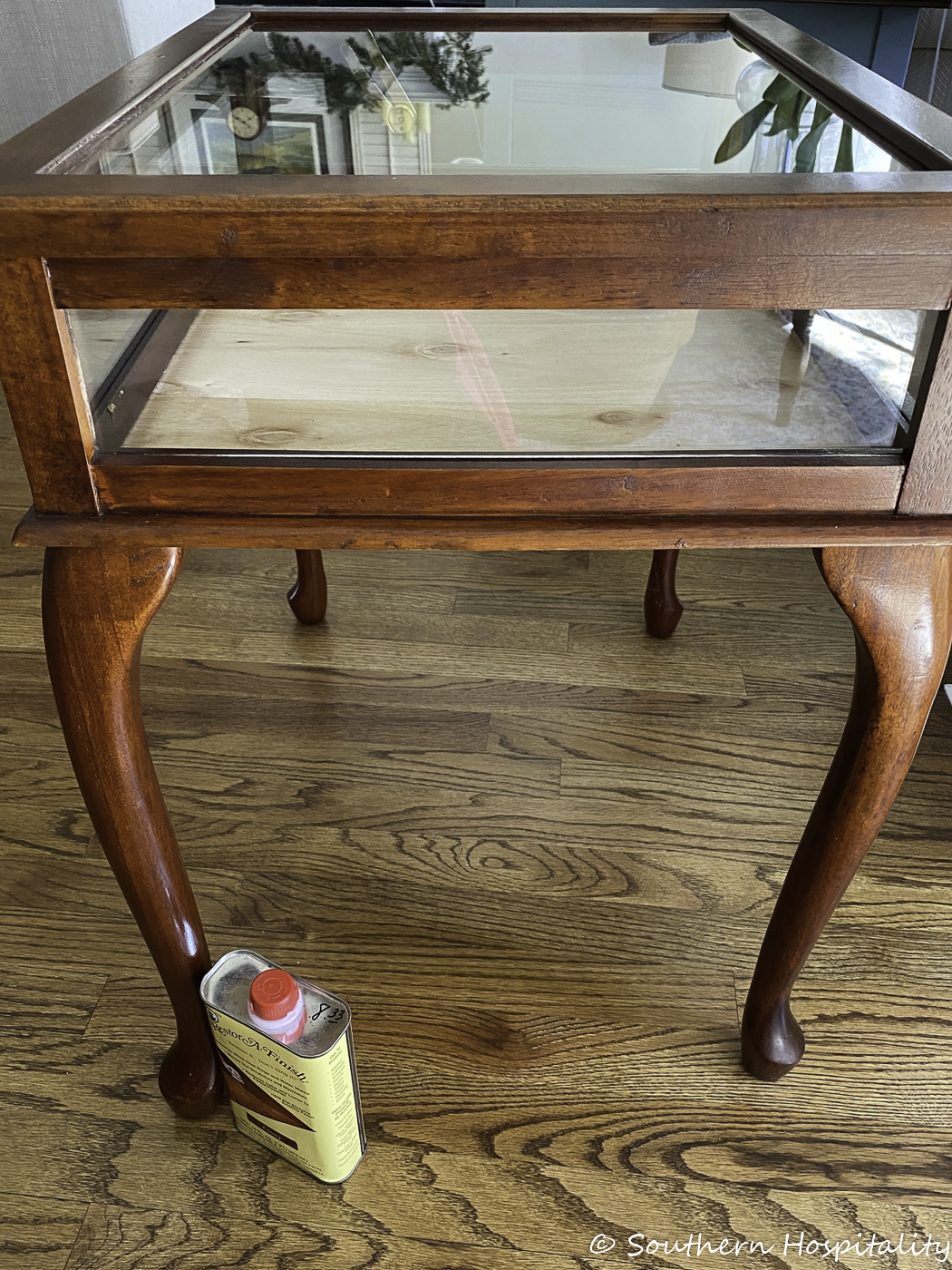 Great job of restoring the original finish of the wood. 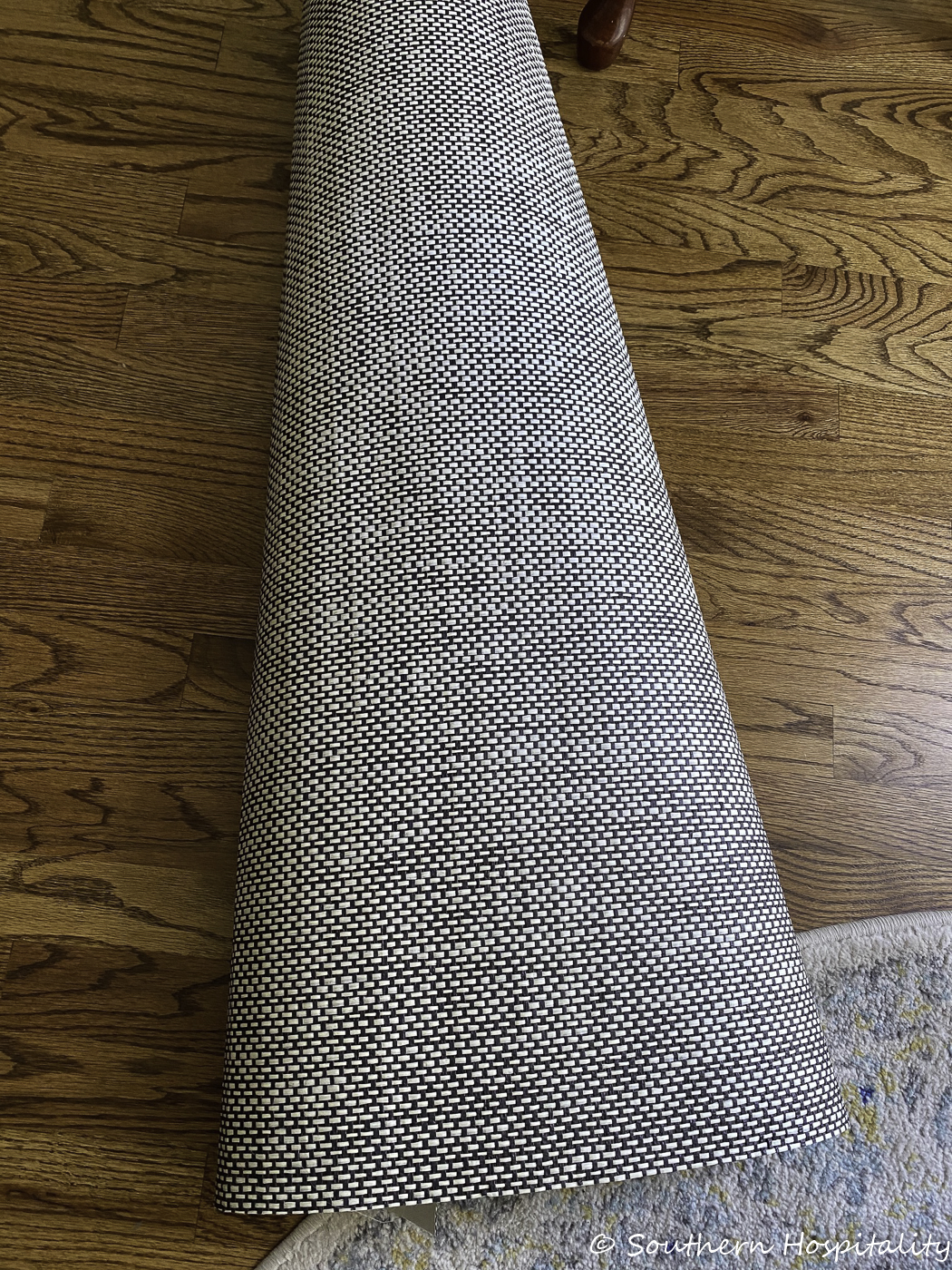 Next he wanted something to put in the bottom of the curio table to show off his collection of toys. I had left over pieces of wallpaper from the guest bath we did a couple years ago and it was perfect for adding to the bottom. We were going to do wallpaper or fabric and the wallpaper won out. It’s masculine and looks good with the cherry finish. 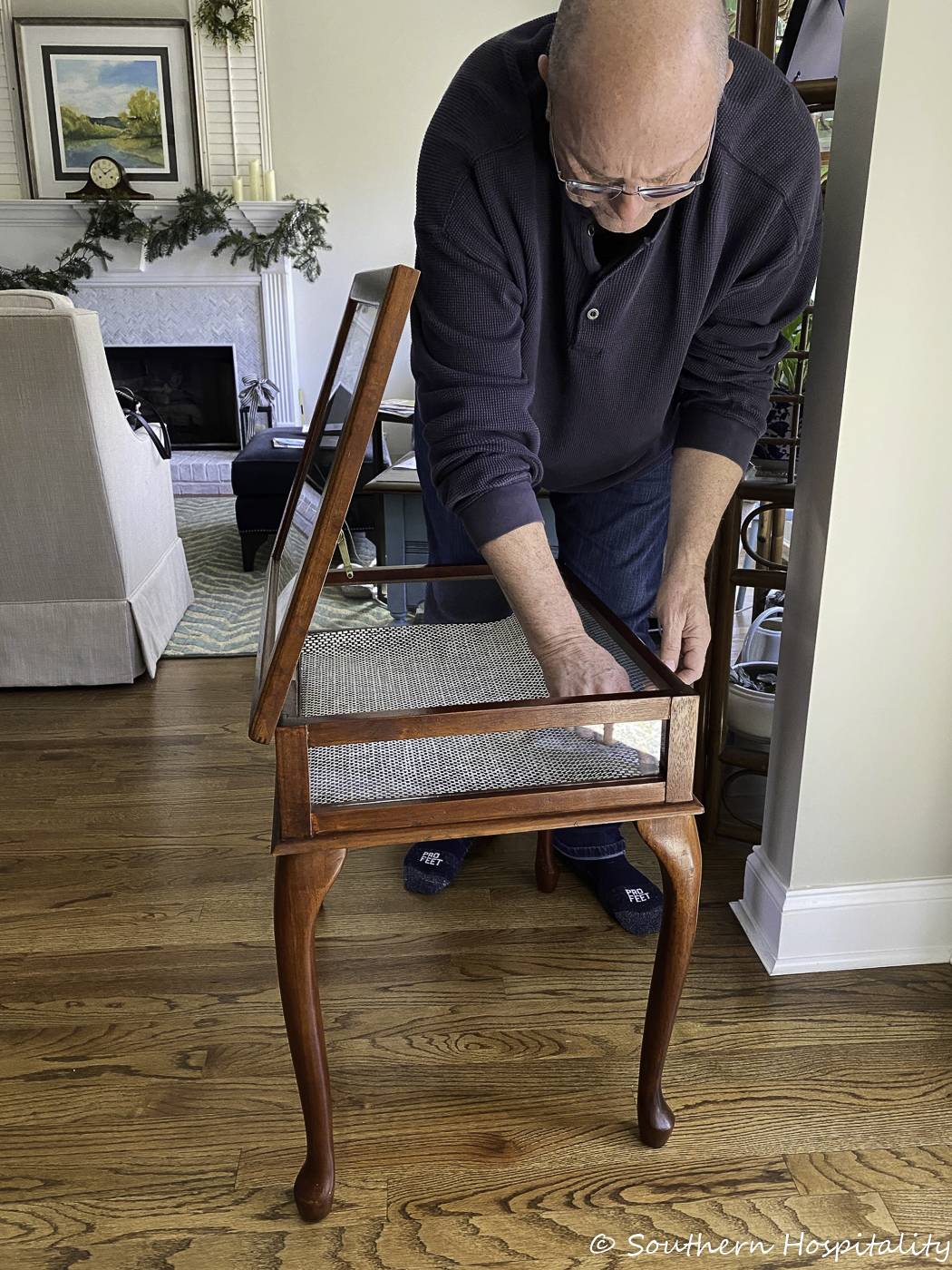 We measured the bottom and I carefully cut the paper to fit the bottom of the curio table, making sure to cut it just right. 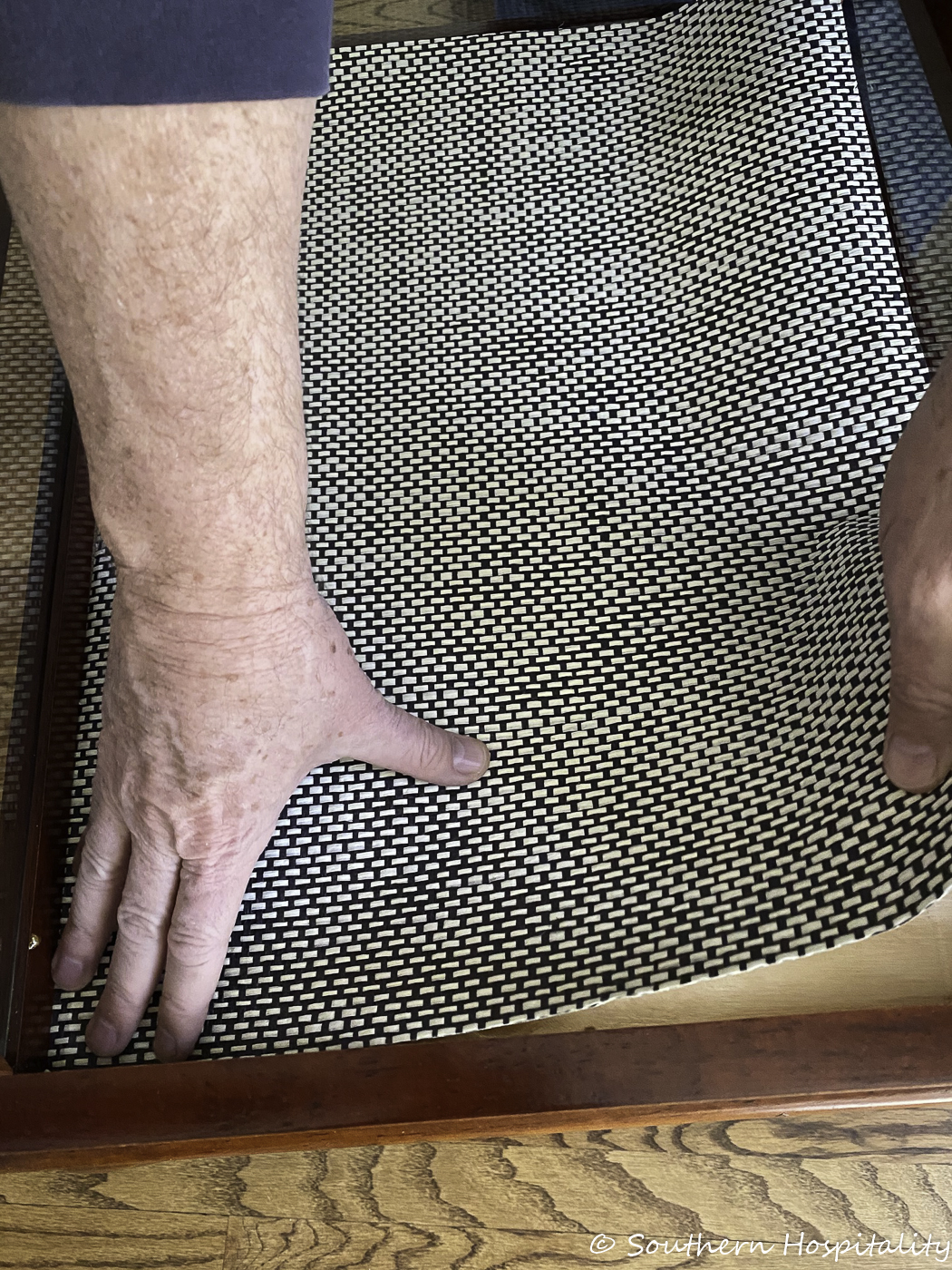 He tried it out before we started gluing just to make sure it was perfect and it was. 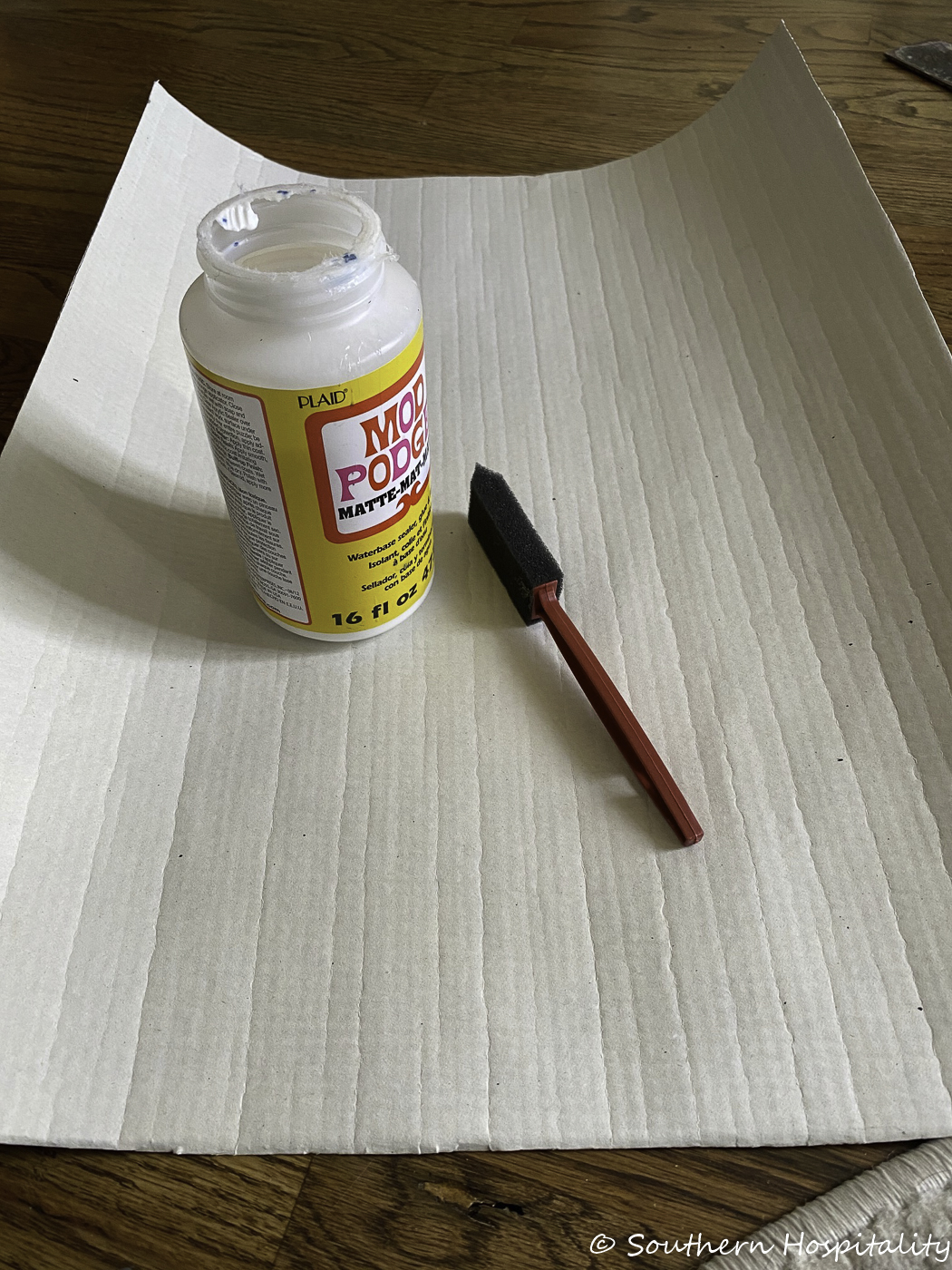 I got out my trusty Mod Podge which works so well for projects like this. I added a liberal amount and brushed it on with a sponge brush. He put it in place and smoothed it all down and it worked great in there. 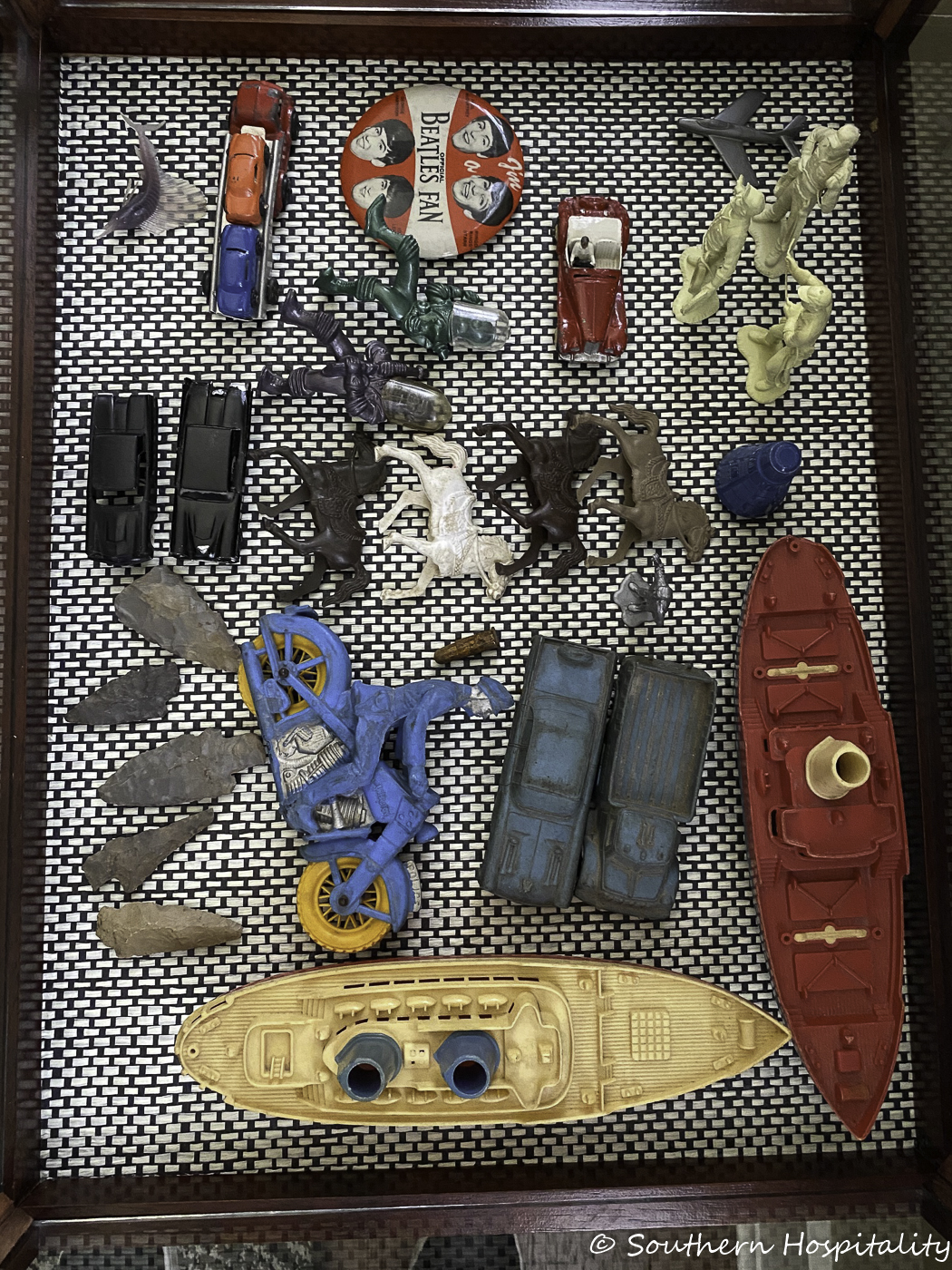 Next, he filled it up with his childhood toys which he has saved for over 60 years. I know you enjoyed hearing about all these pieces that he saved. My sentimental guy keeps everything that means something to him and these toys were no exception. 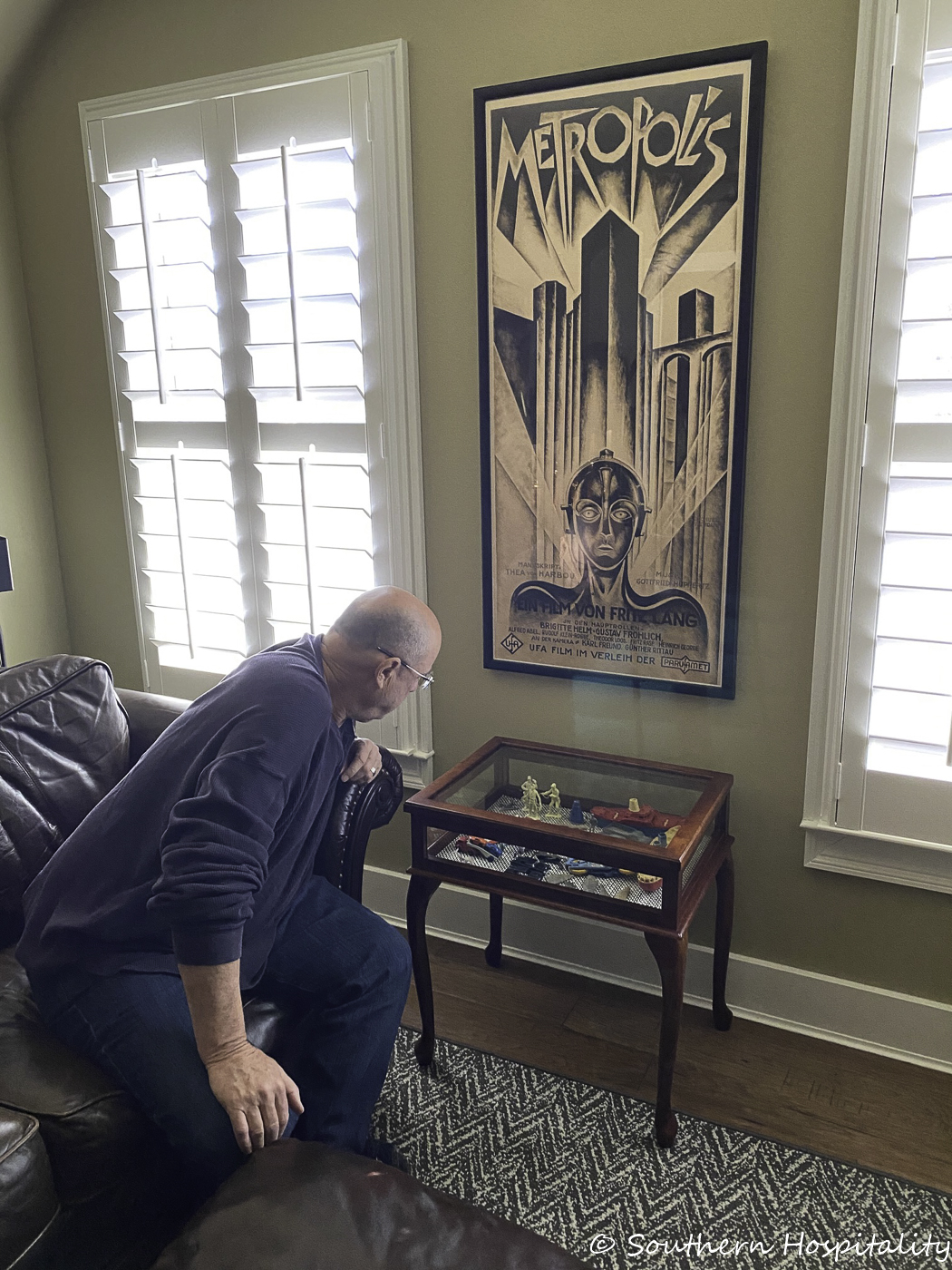 He had just the perfect spot in the Man Cave for this little curio table and will enjoy having his toys displayed. The grandchildren no doubt will get a kick out of Pop’s toys when they get a little older and come over. 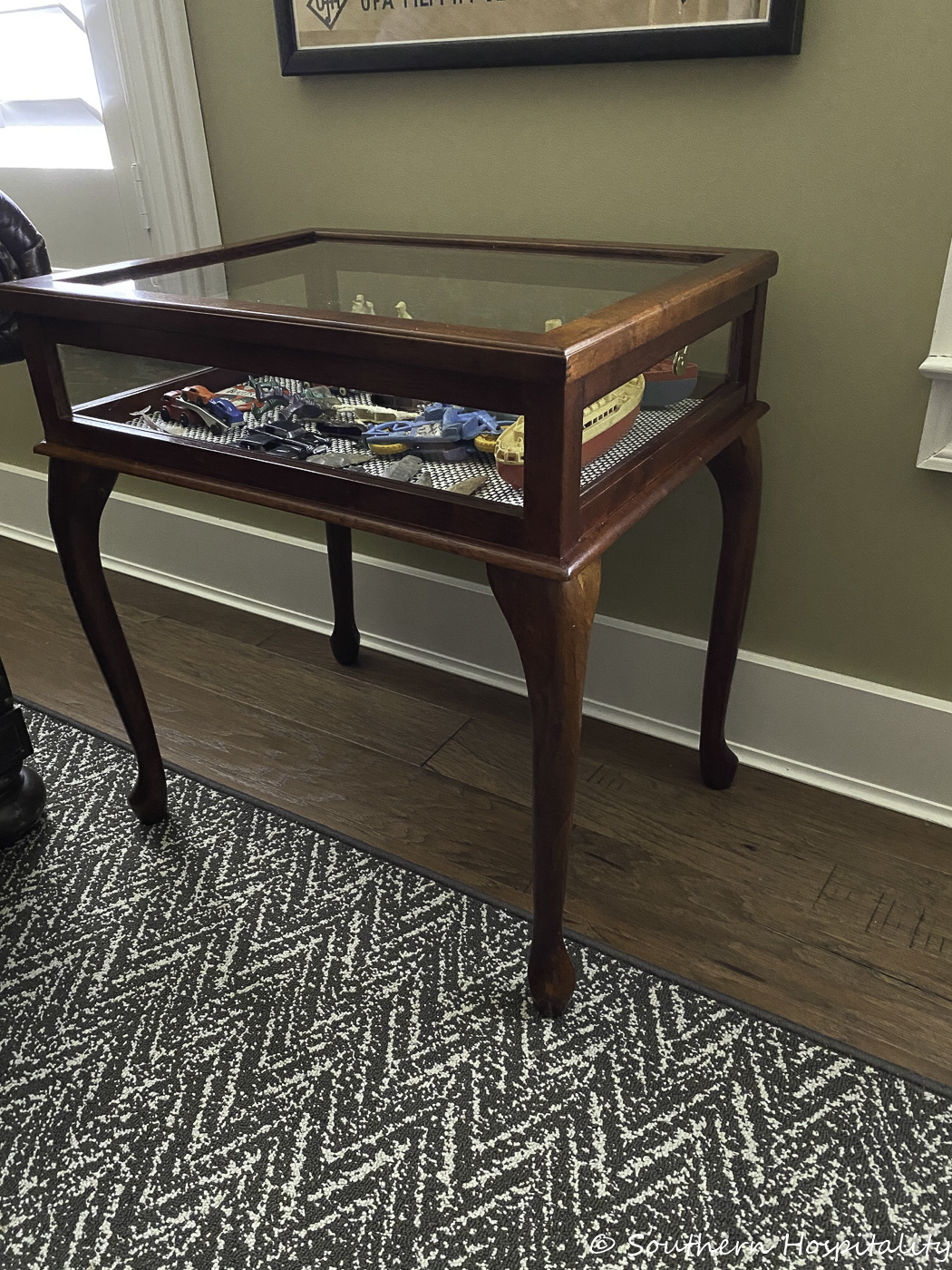 They can now be seen and touched. I know you all loved hearing from Mark and I’m going to try to get him to write more posts for me. He’s a great writer and witty too as you all know!

If you missed the Man Cave post he wrote for me awhile back, be sure to check it out. And yes, the Beatles poster is hanging in the man cave!