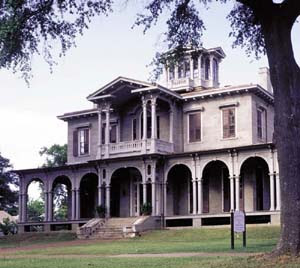 There’s something really special about these old Southern towns. Today, I had the pleasure of going with a group of ladies down to Tuscaloosa, AL (home of the world famous Crimson Tide…ROLL TIDE!) and taking a tour of some of the historical buildings around town. We only had time to visit 2 today, since there were 15 of us, so we will have to go back another day to see the rest.

One of the historical homes we visited was the Gorgas house on campus at UA. It was originally built as the dining hall for the college back in the mid-1800’s & then used as a residence for several families. The gentlemen who was the curator of the house was so enthusiastic about telling us all the history & all about the family who had lived there & he was very interesting. His thick Southern drawl was delightful & he really knew how to tell a good story…as so many do in the South.

The other house we visited was the Jemison-Van de Graaf mansion (picture above). This mansion (constructed 1859-1862) was one of the last and one of the most elaborate great houses to be built in Alabama before the state’s economy was devastated by the Civil War. The builder, wealthy planter and business man , Robert Jemison, Jr., spared no expense to create a “state of the art” home for his family. The Italianate style house was designed by Philadelphia architect John Stewart who was in Tuscaloosa supervising the construction of the Alabama Insane Hospital (now Bryce Hospital). This enormous structure had been designed by Stewart’s partner Samuel Sloan, who also designed famous “Longwood” in Natchez, Mississippi. Jemison’s home incorporated the latest innovations in design and technology including an elaborate plumbing system which included running water, flush toilets, and a copper bathtub. It also featured a large conservatory to be warmed by a central heating plant (unfortunately never installed because of the Yankee blockades), and indoor lighting fueled by coal gas manufactured in a machine located in the basement. Other modern features incorporated in the design were a boiler for producing hot water, a gas stove, an early form of “refrigerator” consisting of a deep dry well in the basement that kept food fresh even in hot Alabama summers.

The Jemison-Van de Graaff Mansion was almost burned during the waning days of the Civil War. When Tuscaloosa and The University of Alabama were threatened by Union troops, Senator Jemison fled for his life and spent several days hiding in the swamp near his plantation. In retribution, Union soldiers sought to burn the home of this leading Confederate senator. Mrs. Jemison was given fifteen minutes to take what possessions she needed from the house before it was put to the torch. Fortunately, during those few minutes young boys, playing a trick on the invading Yankees, rode down Greensboro Avenue crying, “Forrest is coming, hurrah for Forrest!” The Yankee commander, fearful of this legendary rebel general, ordered his troops to retreat. In their haste, they neglected to burn down the Jemison Mansion. The Jemison-Van de Graaff Mansion remained in the family well into the twentieth century. In the 1940s the house was purchased by J.P. and Nell Burchfield who undertook a major restoration of the structure. From 1955 to1979 the mansion served a generation of Tuscaloosans as the Friedman Public Library. With the construction of a new library on the Jack Warner Parkway, the structure became the home of two national publications, Antique Monthly and Horizon. In 1991 the mansion was acquired by the Jemison-Van de Graaff Mansion Foundation. Using grants and generous contributions from private citizens, this not for profit foundation is in the process of carefully researching and restoring this beautiful and historic house to its original appearance.

Description courtesy of the website for this mansion…hope you enjoy a little bit of history today. I know I was inspired! I love to visit old homes & really enjoy imagining how it must have been to live back in those days. I’m thankful for the modern conveniences we have today, but somehow think that we are missing so much of what they enjoyed & that is a sense of peace & community that is missing so much in our society today. We are such a busy country, whereas they took the time to sit & visit on the porch! Ahhhh, for the good ole’ days again.