Since I grew up in Georgia and live in Alabama, I guess I can make fun of the South a bit. I know Southerners are constantly stereotyped as country bumpkins, tasteless, redneck, and just plain uncouth, which is completely untrue. But, looking at this pic, I’d have to say we resemble that remark occasionally. My friend Judy, from Atlanta sent this to me recently and it is supposedly an actual picture taken in the Birmingham metro area (I won’t name the actual city), shopping at a flea market outside a Walmart.

Look very closely at the pic and then you’ll get it…..the caption that came with the email was so good, that I’m passing that on too. I didn’t write it, but I’m sharin’. 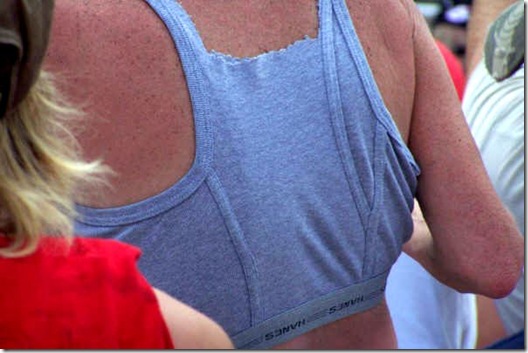 Who stands and looks at a pair of men’s briefs and says hummmm …I can make me a nice summer top from these!!

On the other hand … $6 for a three pack is a good price!! But what if they weren’t bought new? That’s redneck recycling at its best. Don’t throw out yer feller’s drawers when the skidmarks don’t wash out no more. Just cut the crotch out and wear ’em.

I just had to share this one. If someone here locally knows this girl, I don’t think I want to know that. 🙂

Monday, I’m going to start a Today’s Thrifty Treasures party and every Monday we can share our yardsale/thrifty finds from the weekend (for a few Mondays anyway). So, come back on Monday and we’ll get that started. See if you have something you can share with us and add it to Mr. Linky!

The giveaway from Engraved Euniques in the post below will end Sunday night and the winner will be announced Monday a.m. There’s still time to sign up!