I know you all love to hear about my family, so I’m sharing an update today on Thanksgiving and my parents. My family members were all home for the holiday and we did all have a feast together so I’ll share that too. When parents are elderly, you just have to take it one day and holiday at a time. We never know when things are going to change drastically and the holidays as we knew them are definitely different now than before. But we are grateful to still have them both here with us. 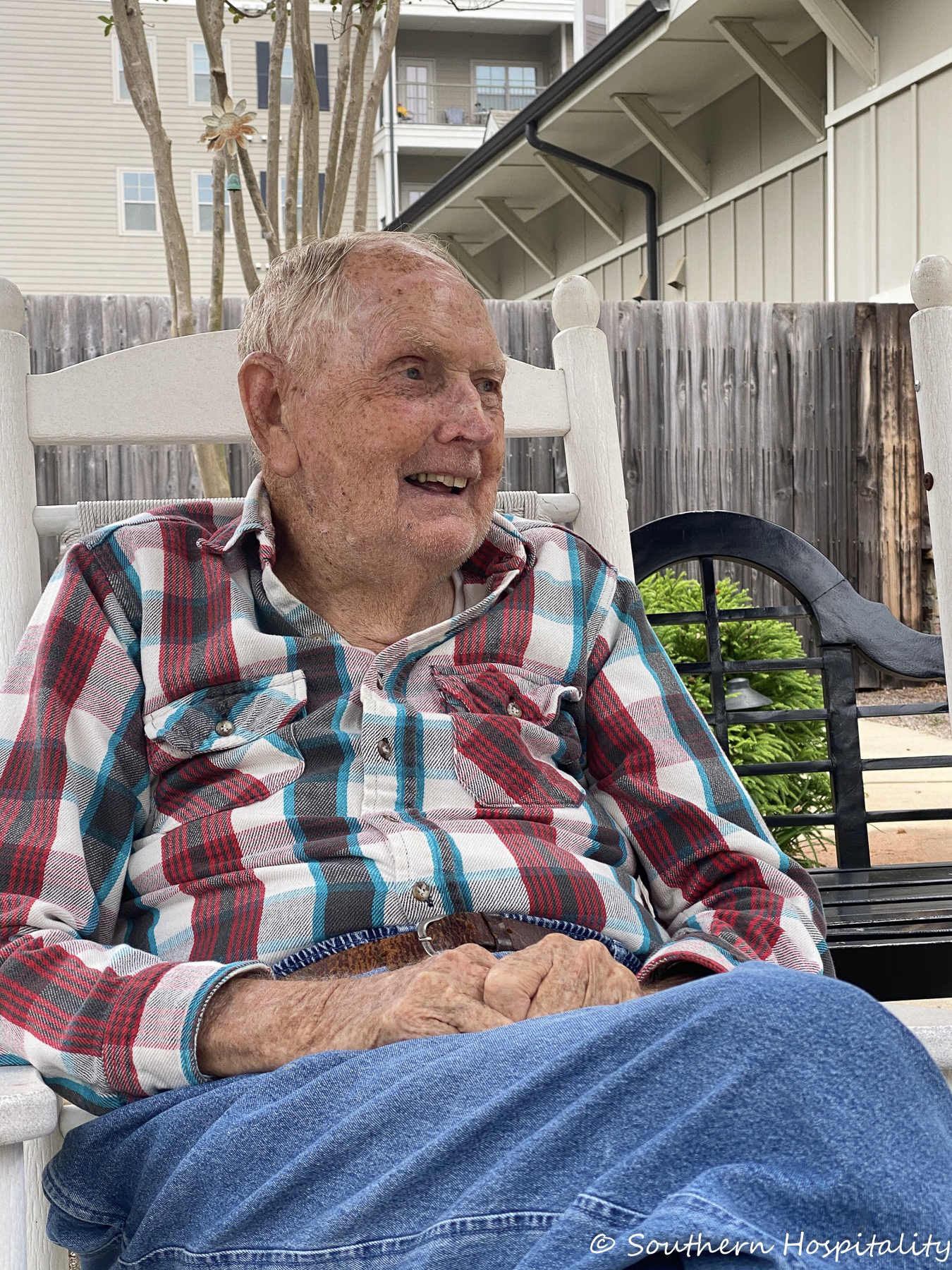 I’ve been taking lots of pics along the way, as we have been outside a lot during this fall season. Dad dearly loves the outdoors and they have a nice patio in his memory care area and can go out there on his own, so we often go out there to sit and visit. 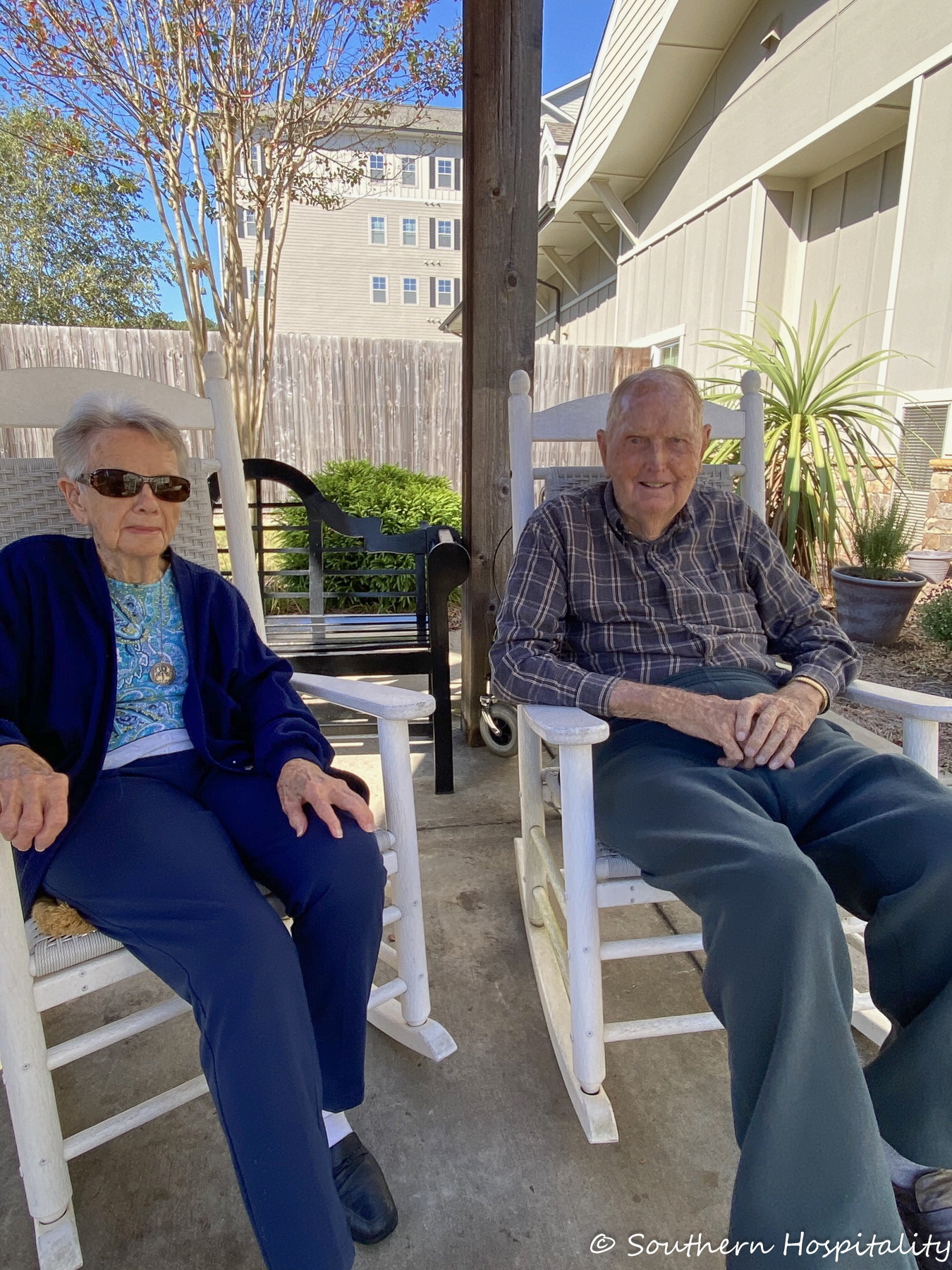 They both are doing pretty well considering their age and ailments. Mom is still content and has healed up nicely from her broken shoulder. I did an update on their one year anniversary at Dogwood if you missed that one. We are still so happy that we moved them when we did. 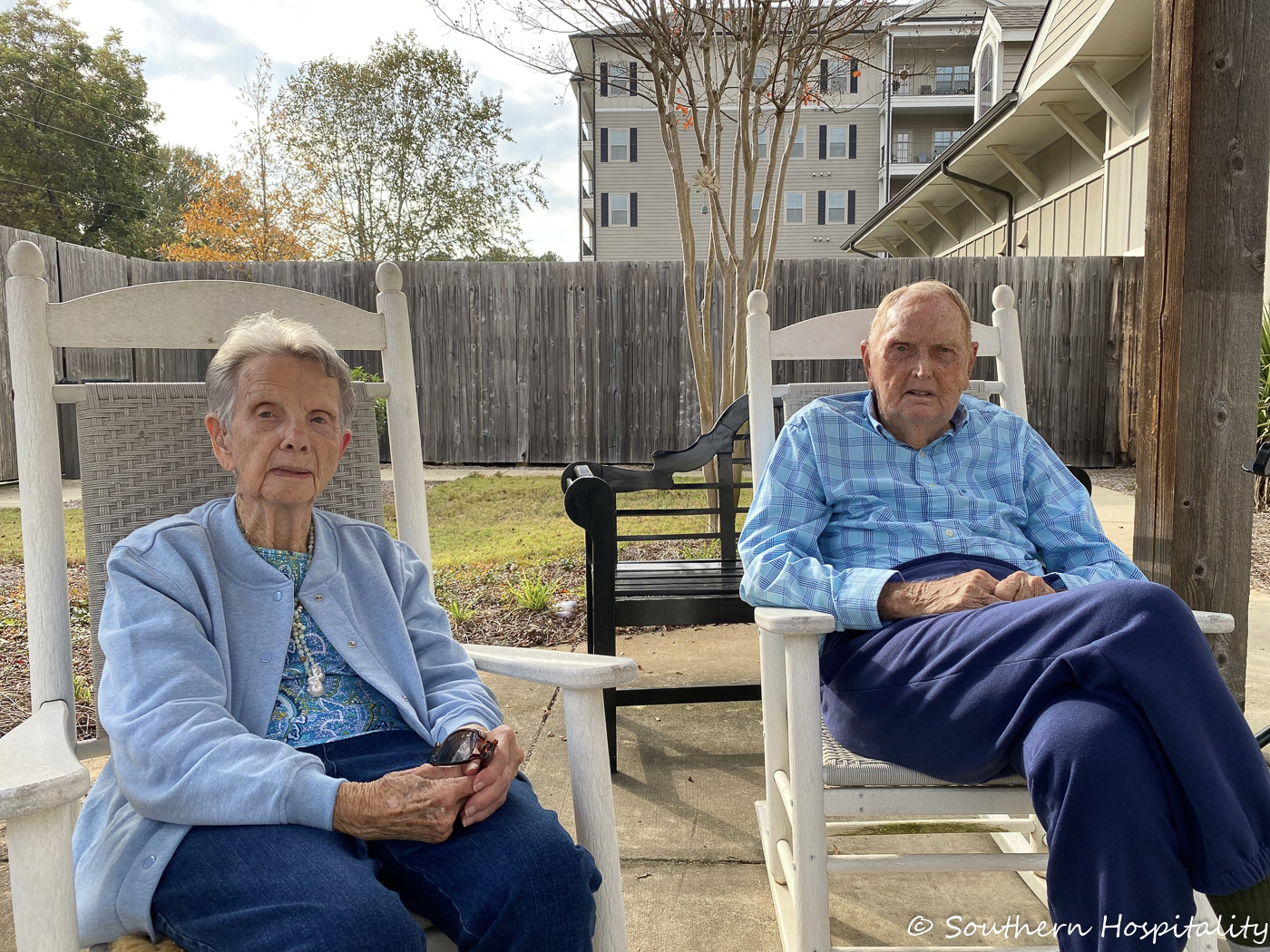 They are both content in their surroundings. Mom continues to have lots of friends and participates in many of the activities. Dad just looks forward to his 3 meals a day, but mostly stays to himself. He likes quiet more than a lot of noise, so doesn’t sit in front of the TV or hang out with big groups. 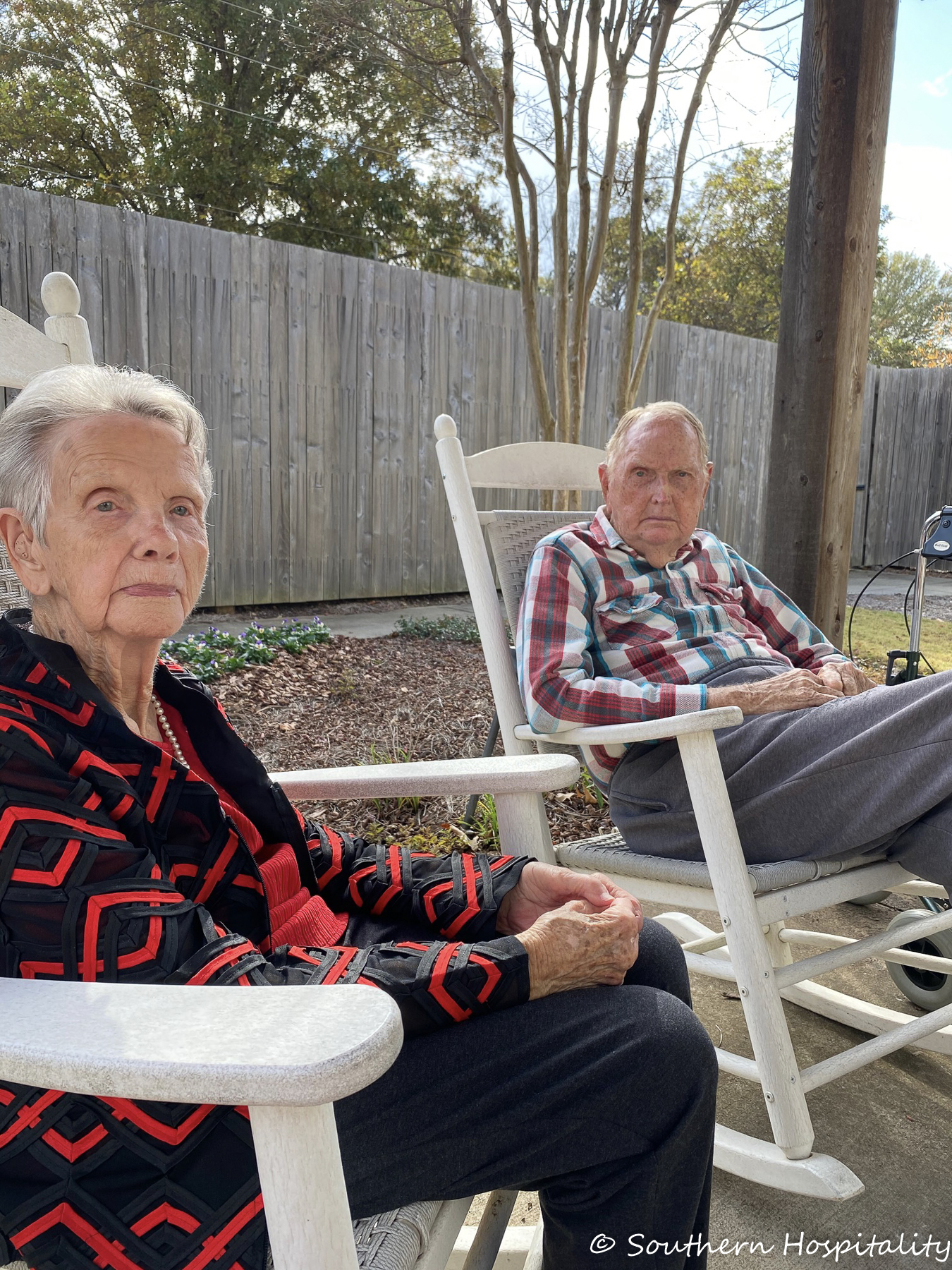 It’s nice to have a comfortable outdoor space to retreat to and he does that often even when we aren’t there. 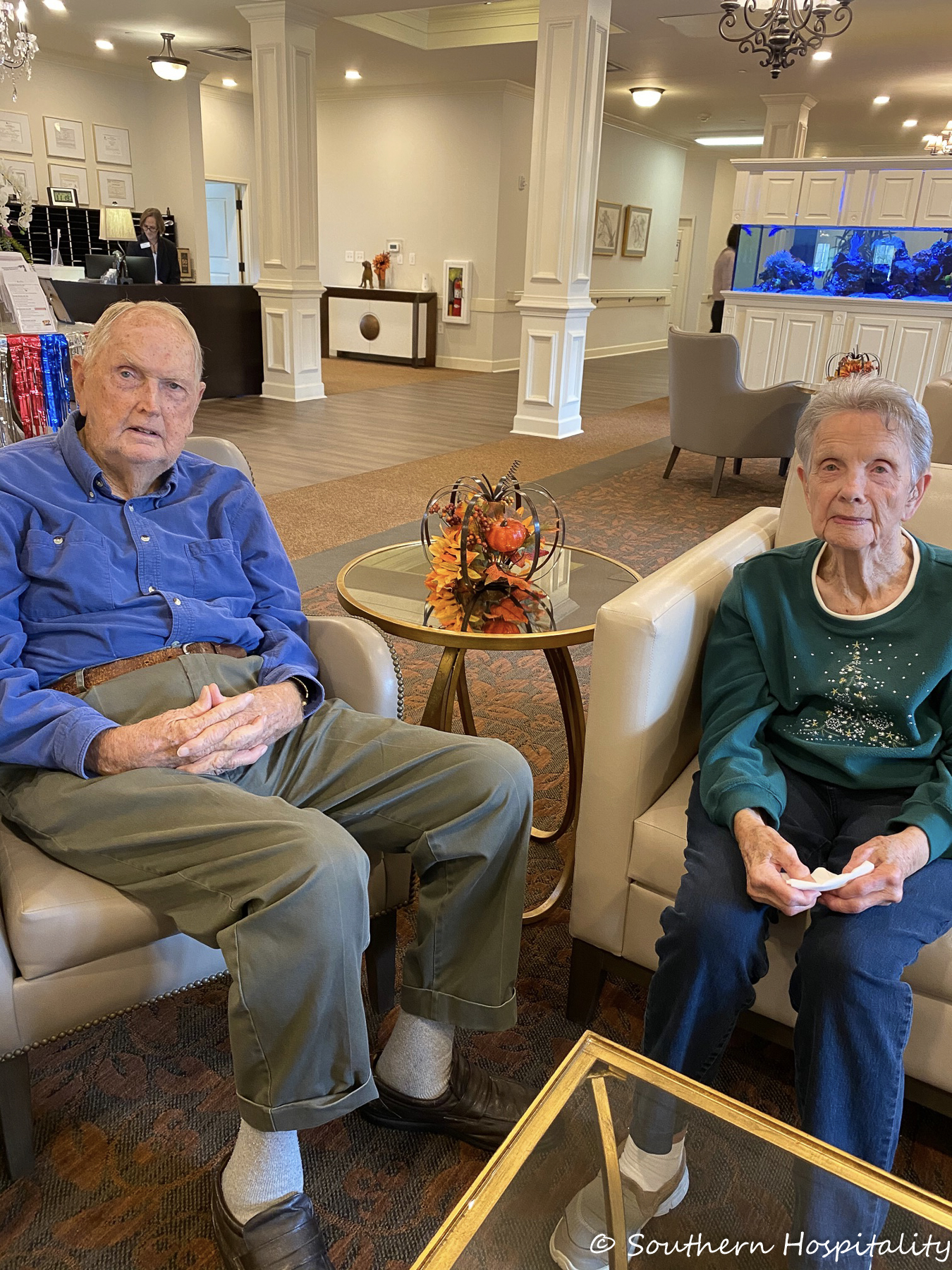 Dogwood decorates for all the seasons and makes it nice for the residents. 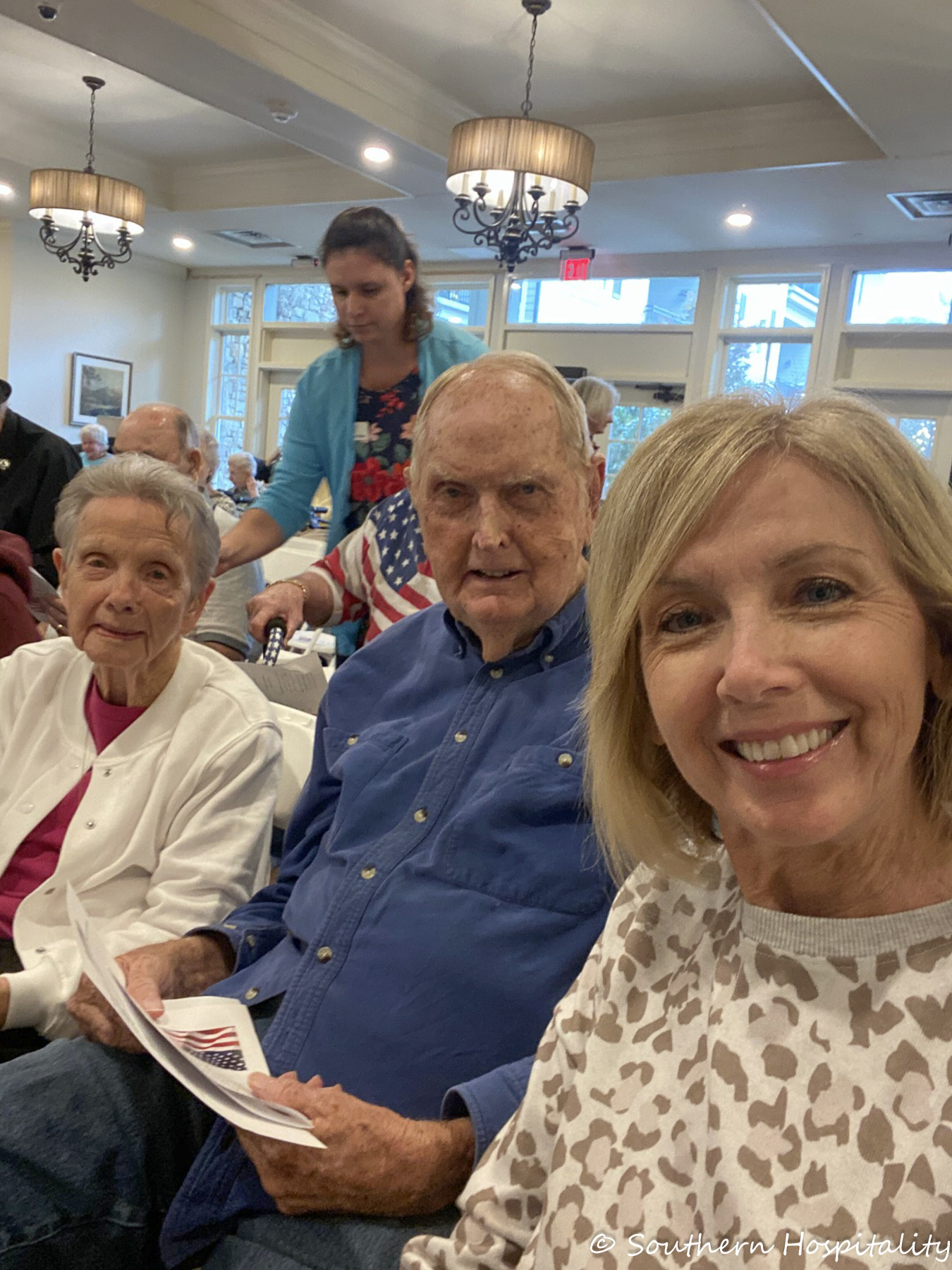 They had a nice celebration for all the veterans and dad’s picture was on the wall. He liked that and walked over to see it. 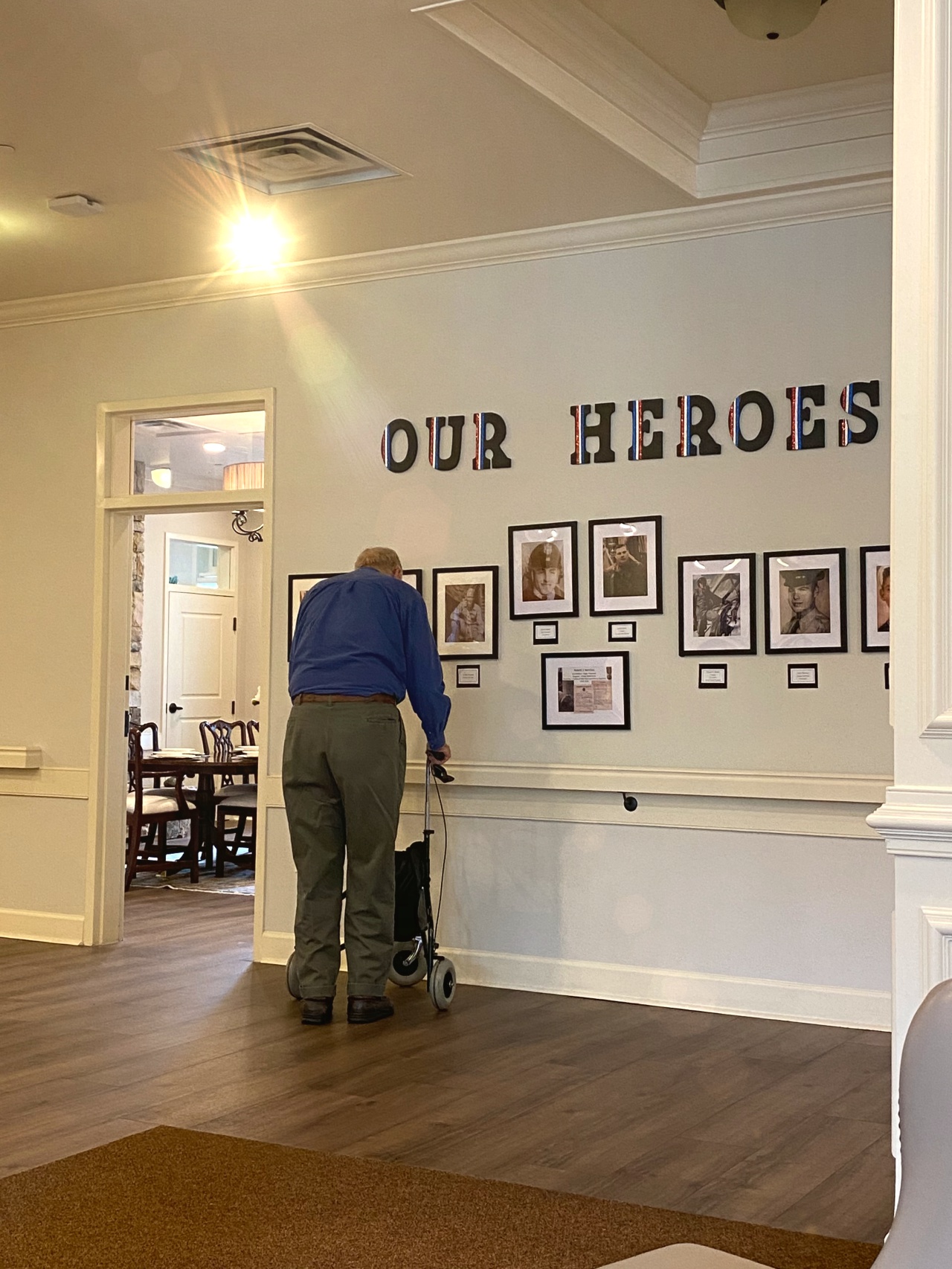 Mom found a picture of him in his army uniform in their photo albums, so they scanned it and hung it on the wall with the rest of the veterans represented. They did a nice celebrations of the veterans with many family members there and it was well received. 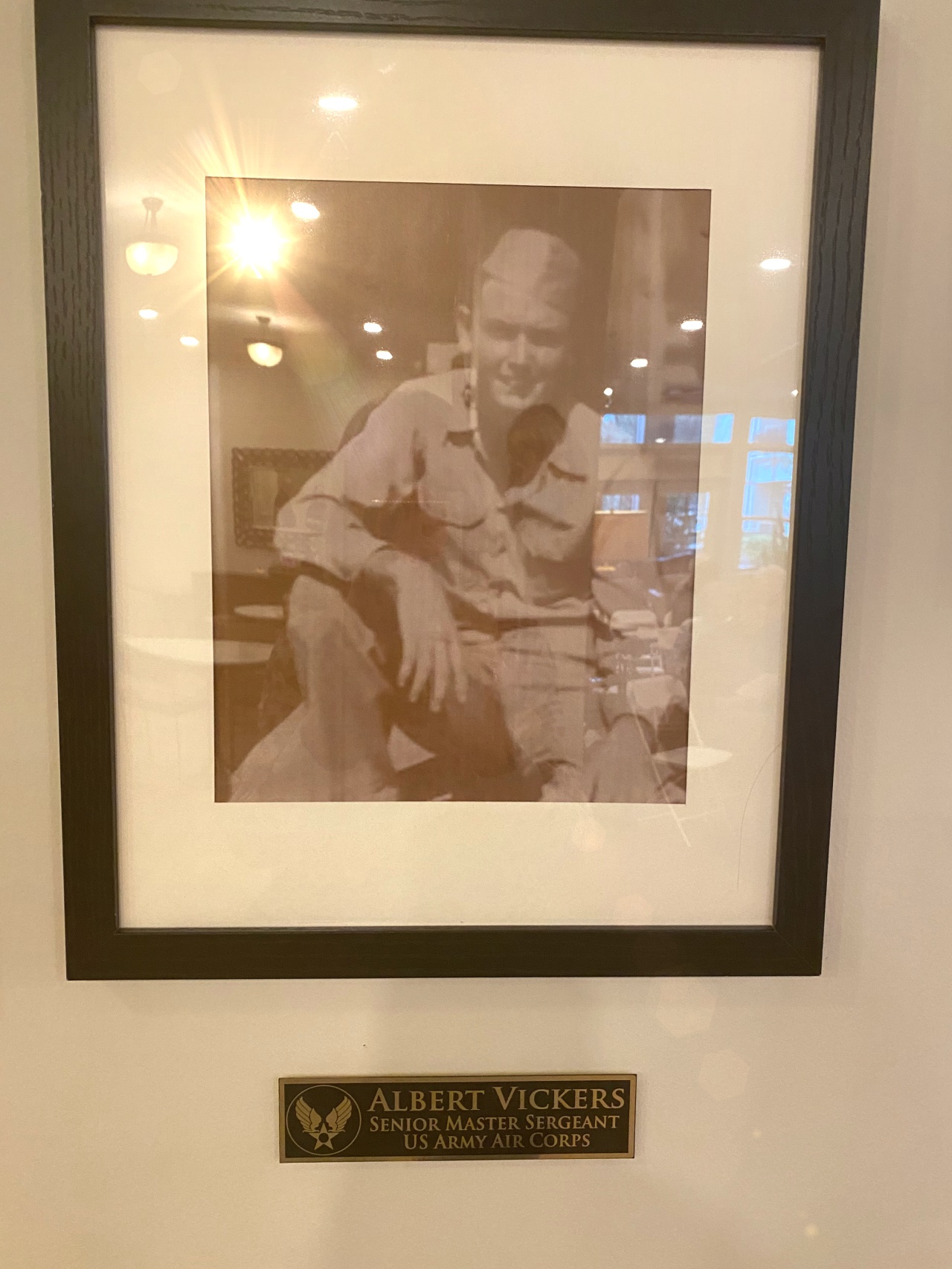 Daddy can still talk about his army days and remember much of where he went and what happened back then. He was in at the end of the war, so didn’t see any combat and we are thankful for that. 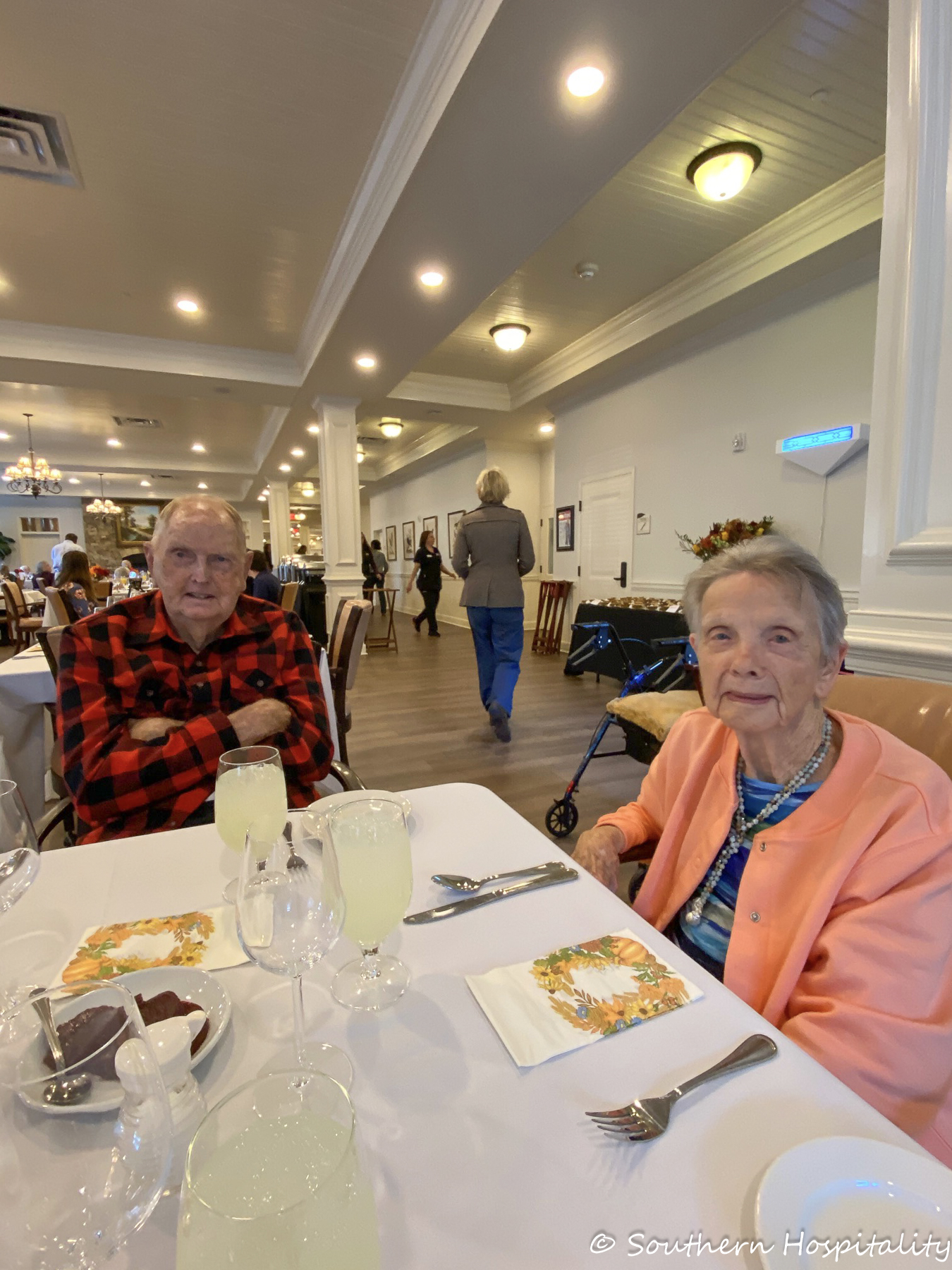 The week before Thanksgiving, Dogwood invited all the family to come for a Thanksgiving meal together. It was very nice and they do a really good job of making things very special for the residents and families. We are grateful for them and all they do to make life as normal as possible for those in assisted living and memory care. Dad was happy to be in mom’s dining room for a change instead of his side in memory care. Mark went with me and we had a nice visit. 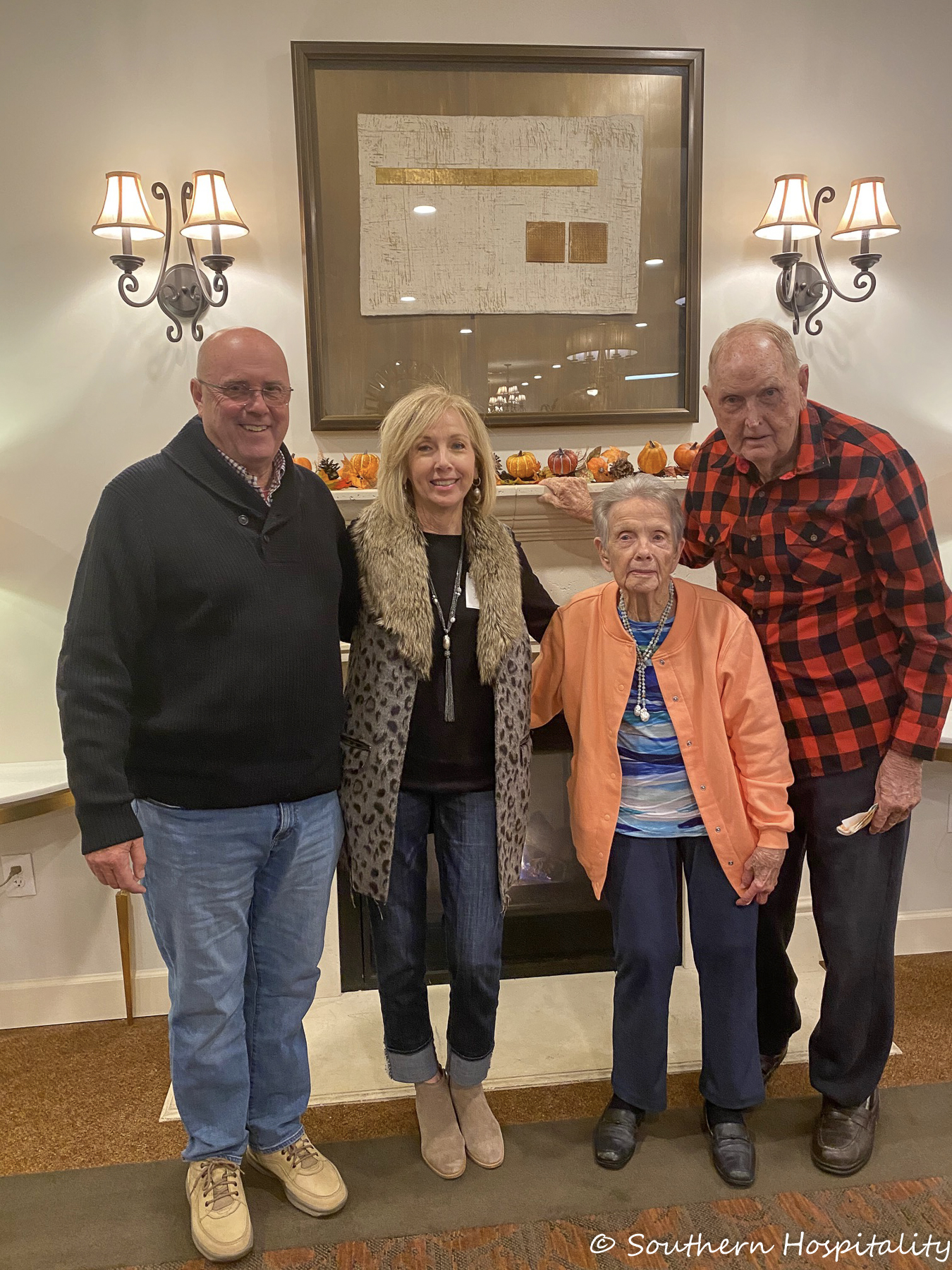 We got a picture after dinner by the fireplace to remember our day. This was about the only real family picture I got for Thanksgiving this year. Dad didn’t get to be with us on Thanksgiving day so I’m glad we had this one.

We had a bit of a scare the weekend before Thanksgiving, when mom went over that Sunday morning and found dad lethargic and weak. He had a hard time getting up and going that morning and was sitting at the breakfast table after breakfast. He sat there the whole morning until lunch and ate his lunch, but still didn’t want to get up and go. He was just weak and had no energy, so we decided to take him to the hospital. At that point, an ambulance was called and I had them take him to Northside Cherokee Canton where he was admitted that night for observance and tests. My sister drove in just in time to meet me and go to the hospital with dad where we admitted him on that Sunday evening and he stayed for 3 nights.

Northside did tests and confirmed that dad’s heart is pumping at only 50% what it should be. He was dehydrated too and they gave him fluids the first day, which seemed to perk him up by the next day. They didn’t find anything else alarming, but none of us really knew about the 50% diagnoses part until then. 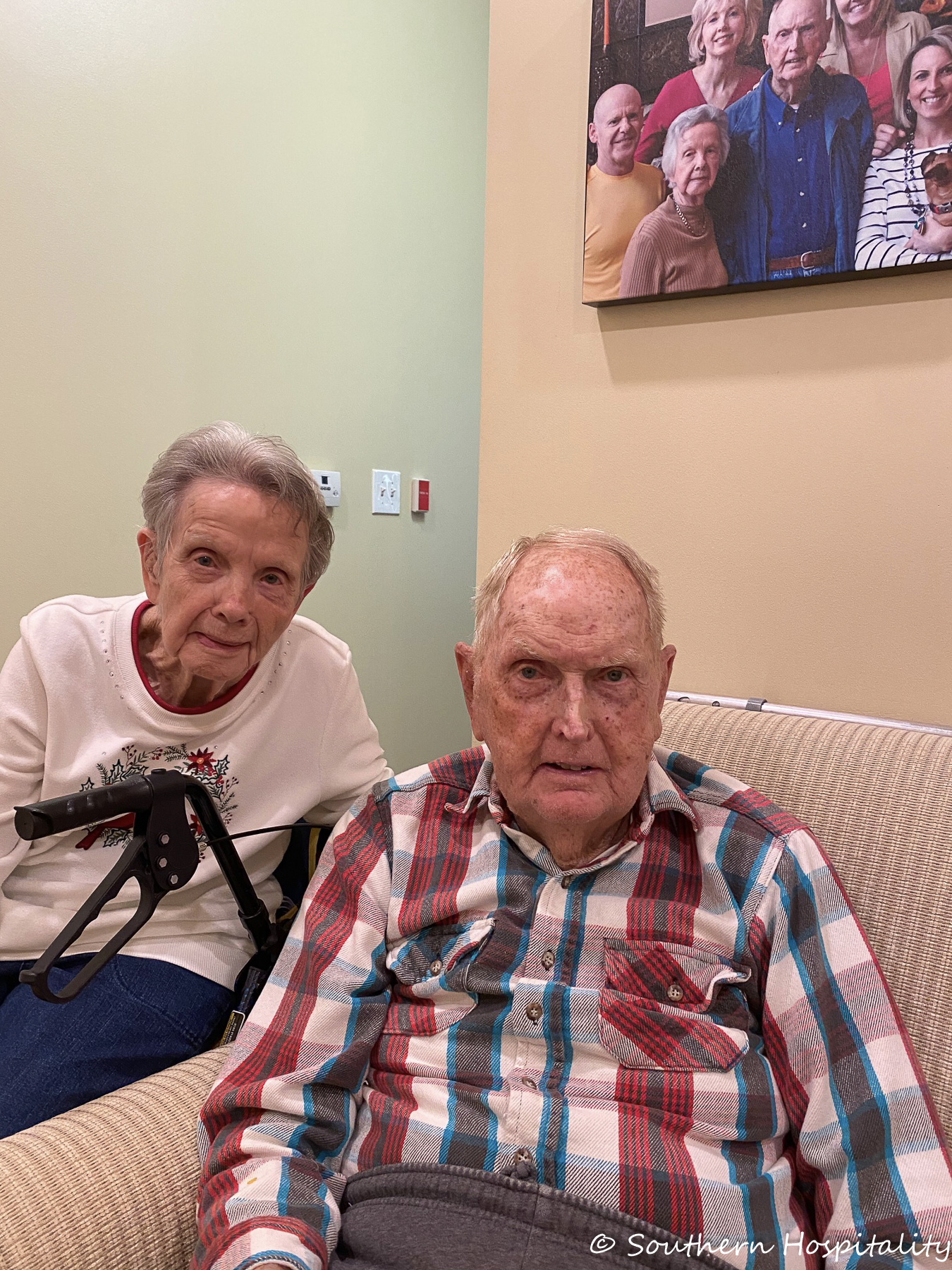 This was right after he got back from the hospital. He still wasn’t up to going with us for Thanksgiving day, so I picked mom up and we had Thanksgiving lunch at Bruce’s mom’s house, Doris. She lives in an over 55 community in a nice home with an open floor plan and has a much bigger table and area for all of us to sit, so we had lunch there and it was delicious. We 3 girls all cooked the meal and we were proud of ourselves. 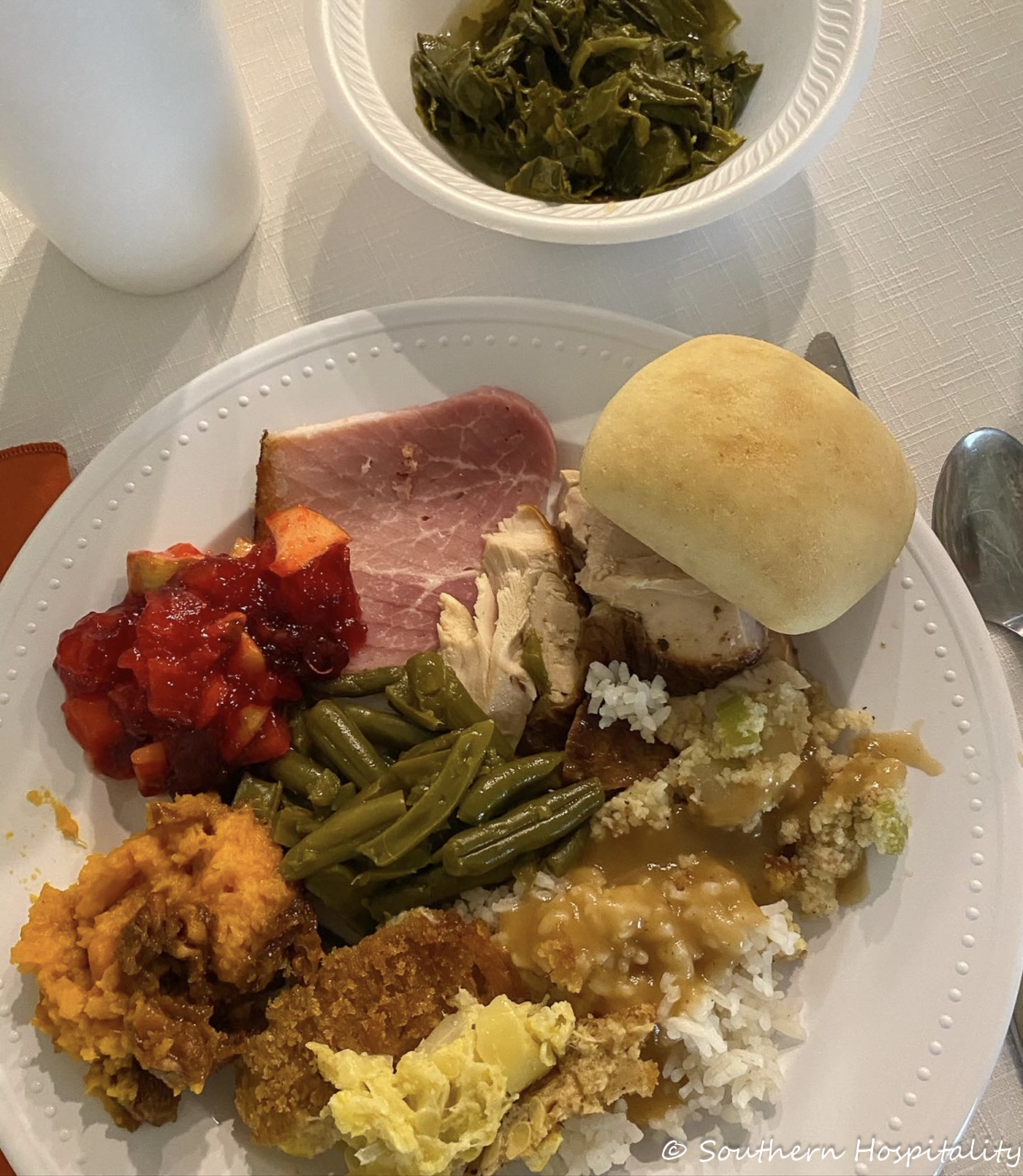 Here’s my plate! As you can see, we didn’t go hungry! 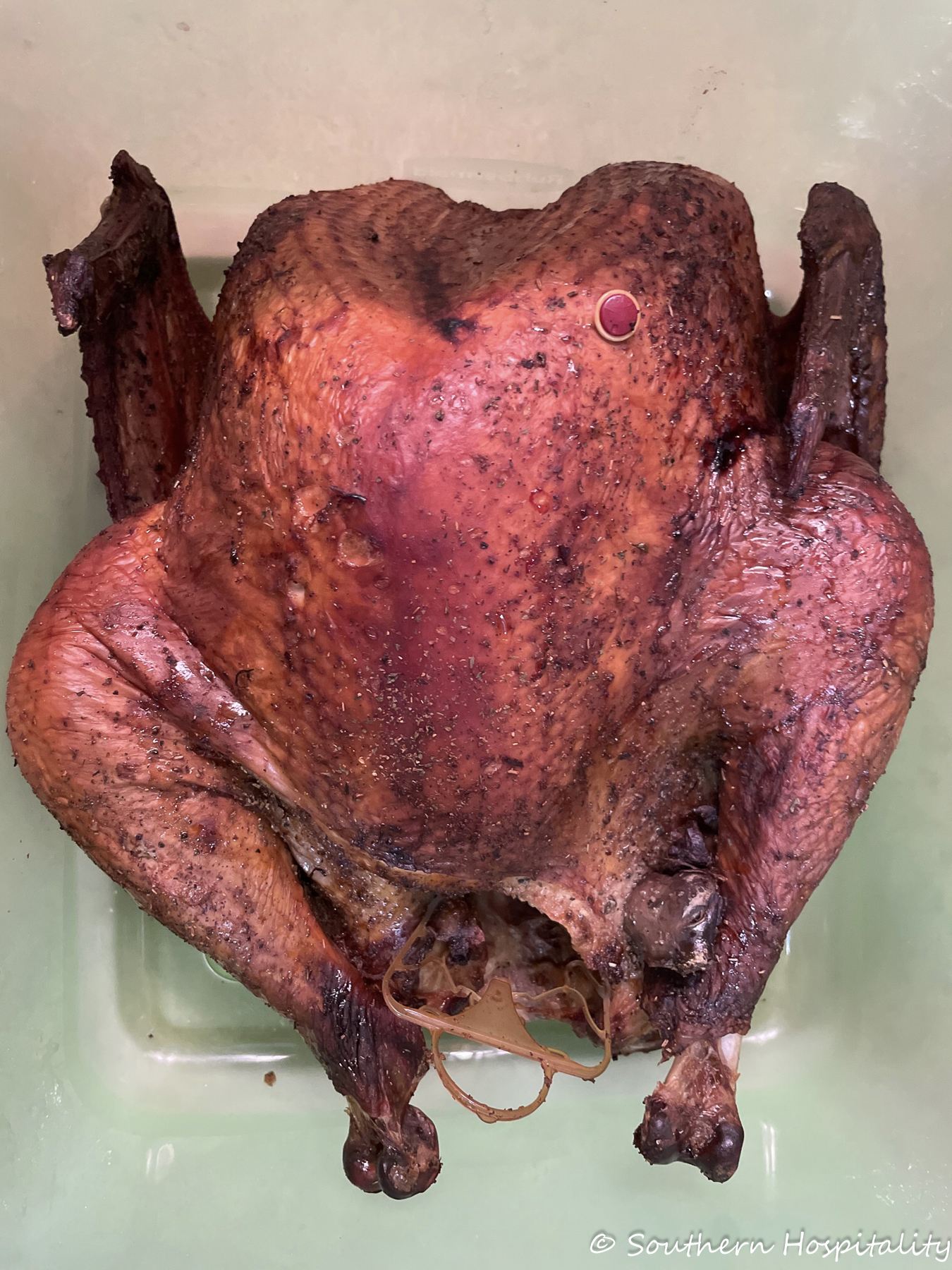 Bruce borrowed my electric smoker and cooked the turkey over there. It turned out so yummy! We are going to do one just like it for Christmas. 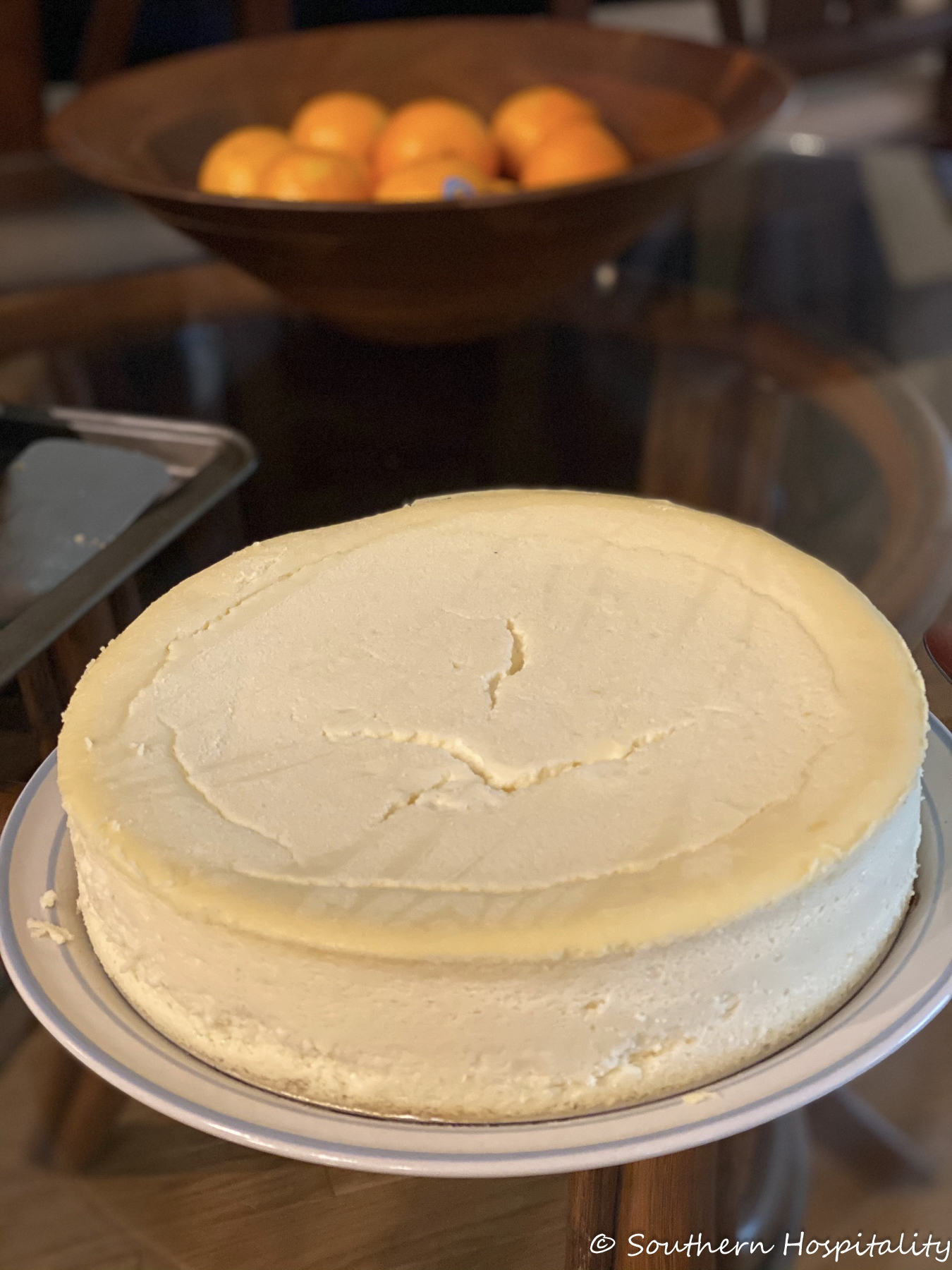 I made a homemade from scratch NY style cheesecake that I hadn’t made for years and it was yummy too. I’ll share the recipe with you later on if you’re interested. I served it with pureed strawberries. 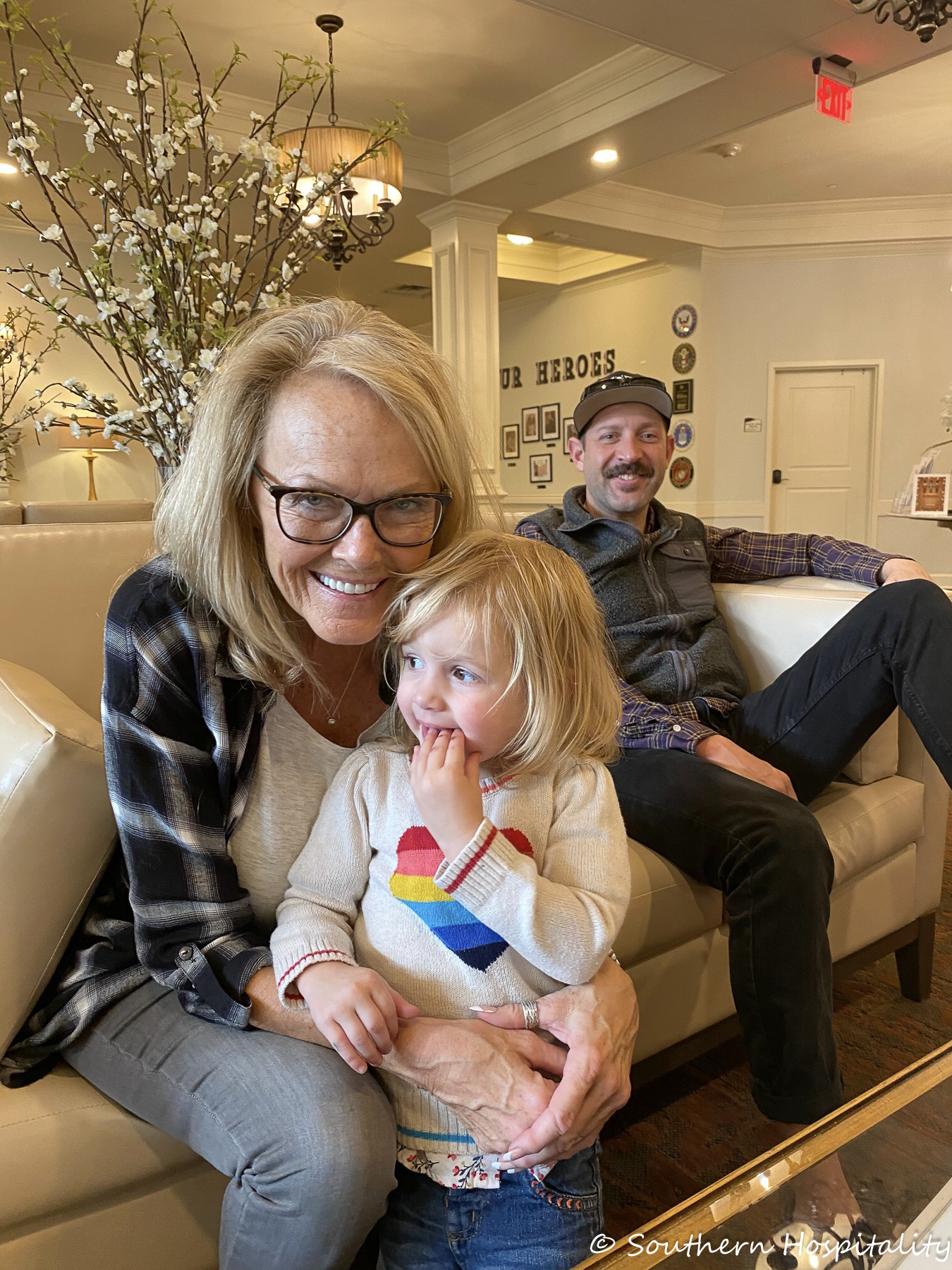 Renee, Alex and Philip visiting at Dogwood one day. 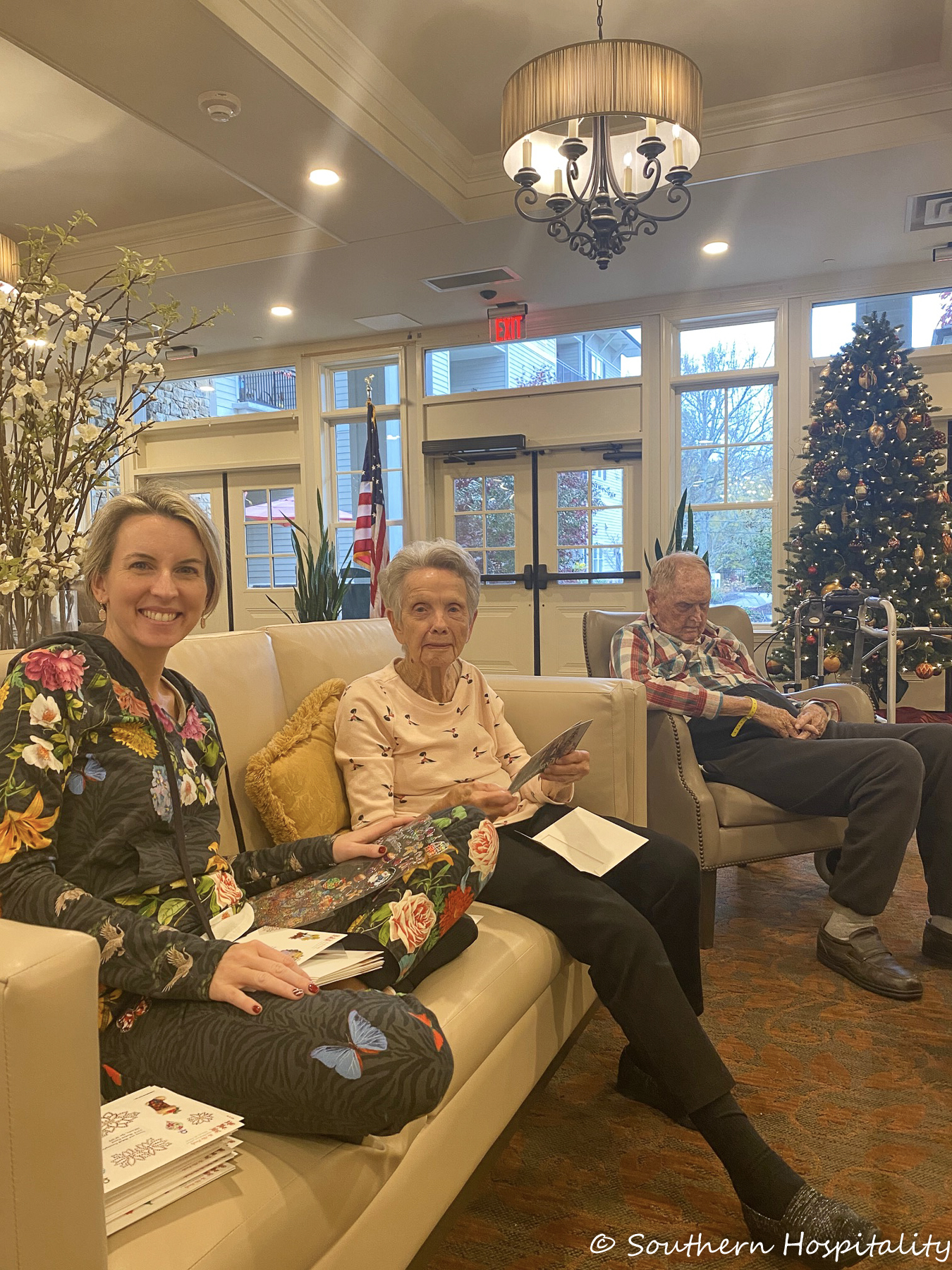 Renee and Bruce went home on Saturday and Lauren and her family stayed until Sunday, so we got in a few visits. Dad was napping here and Lauren was getting her Christmas cards done. 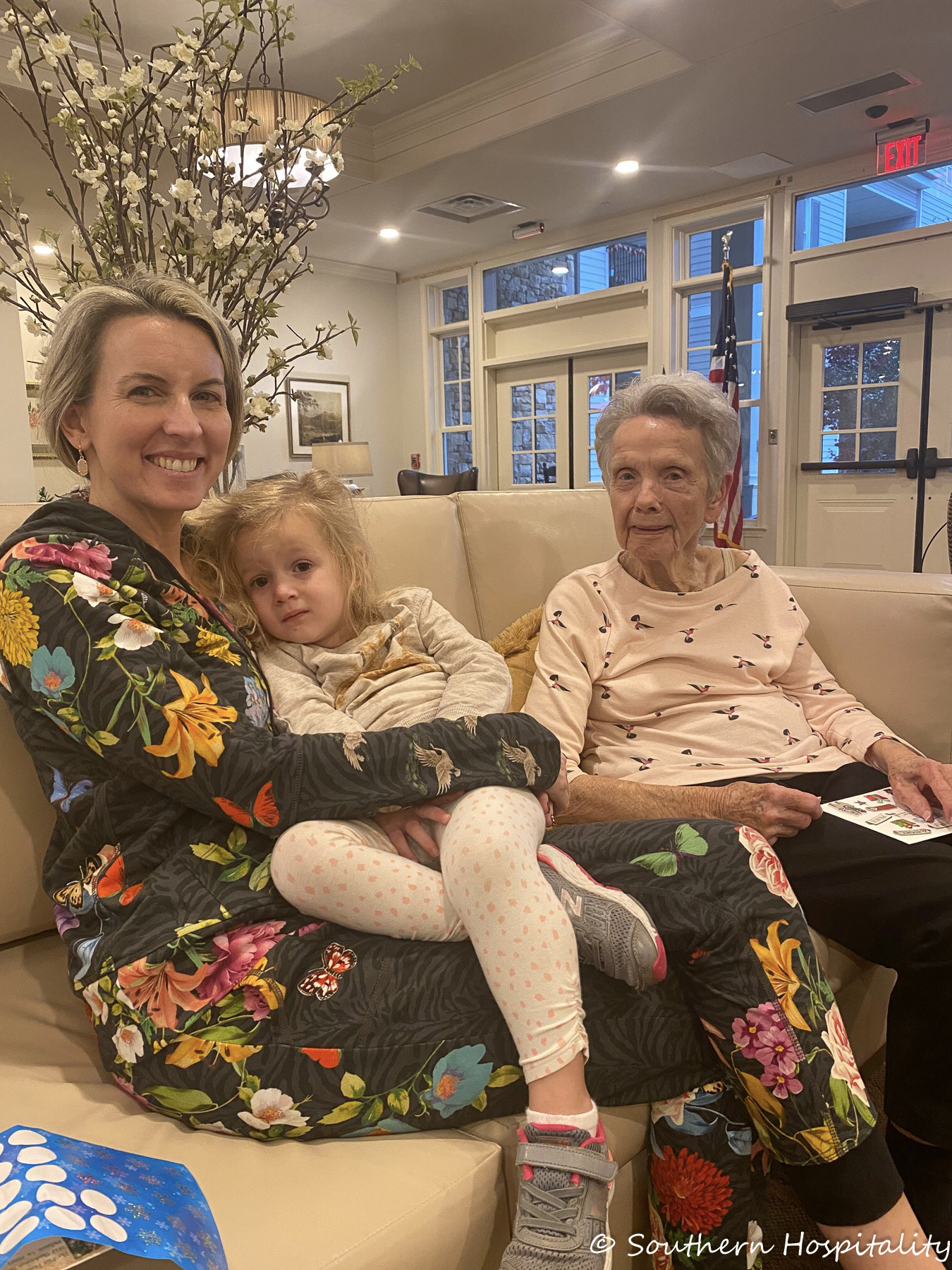 Little Alex is a big hit, she’s so cute. 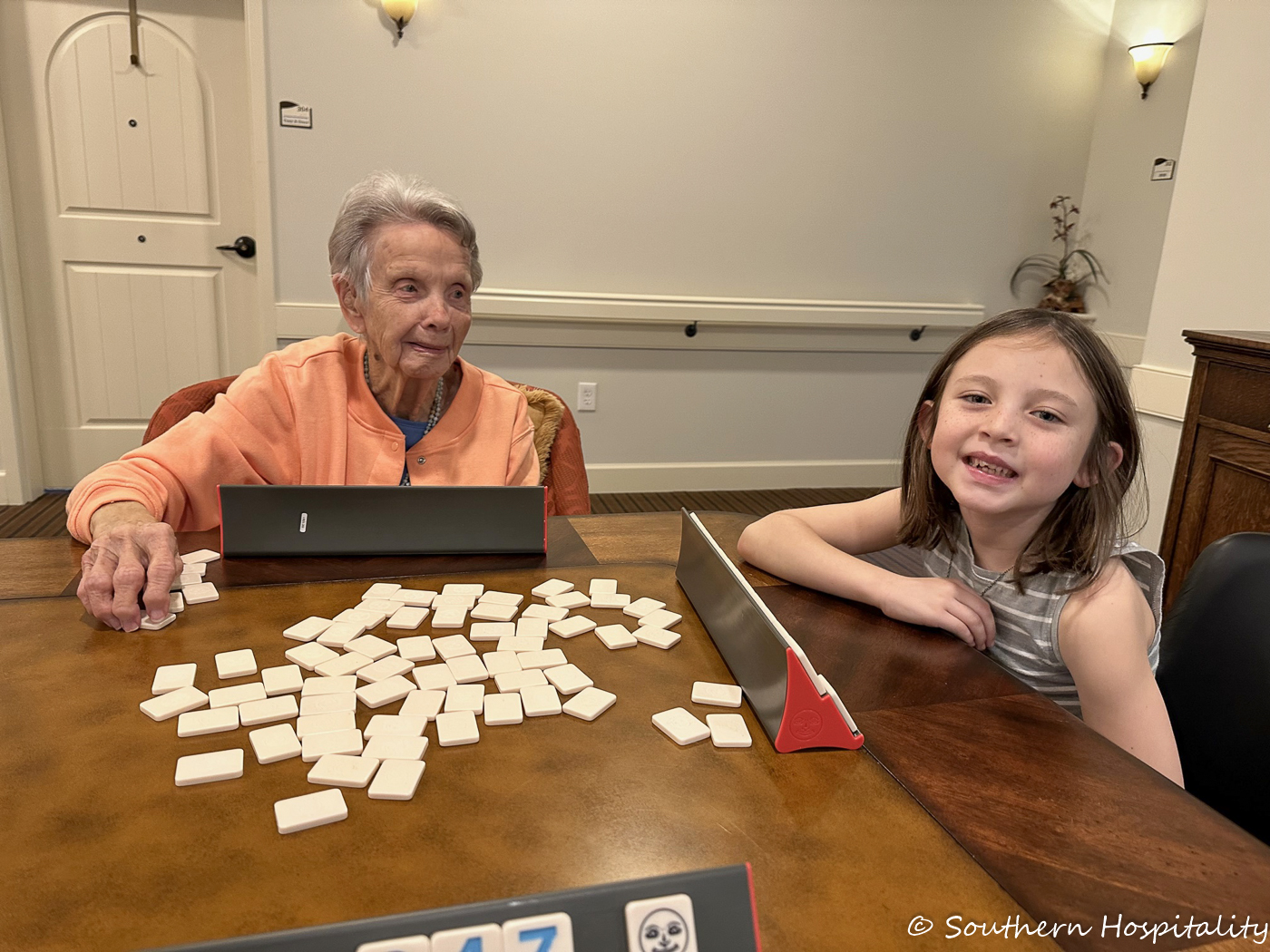 Iris loves to play games and she and mom played Rummikub a few times. She also likes Bingo a lot. 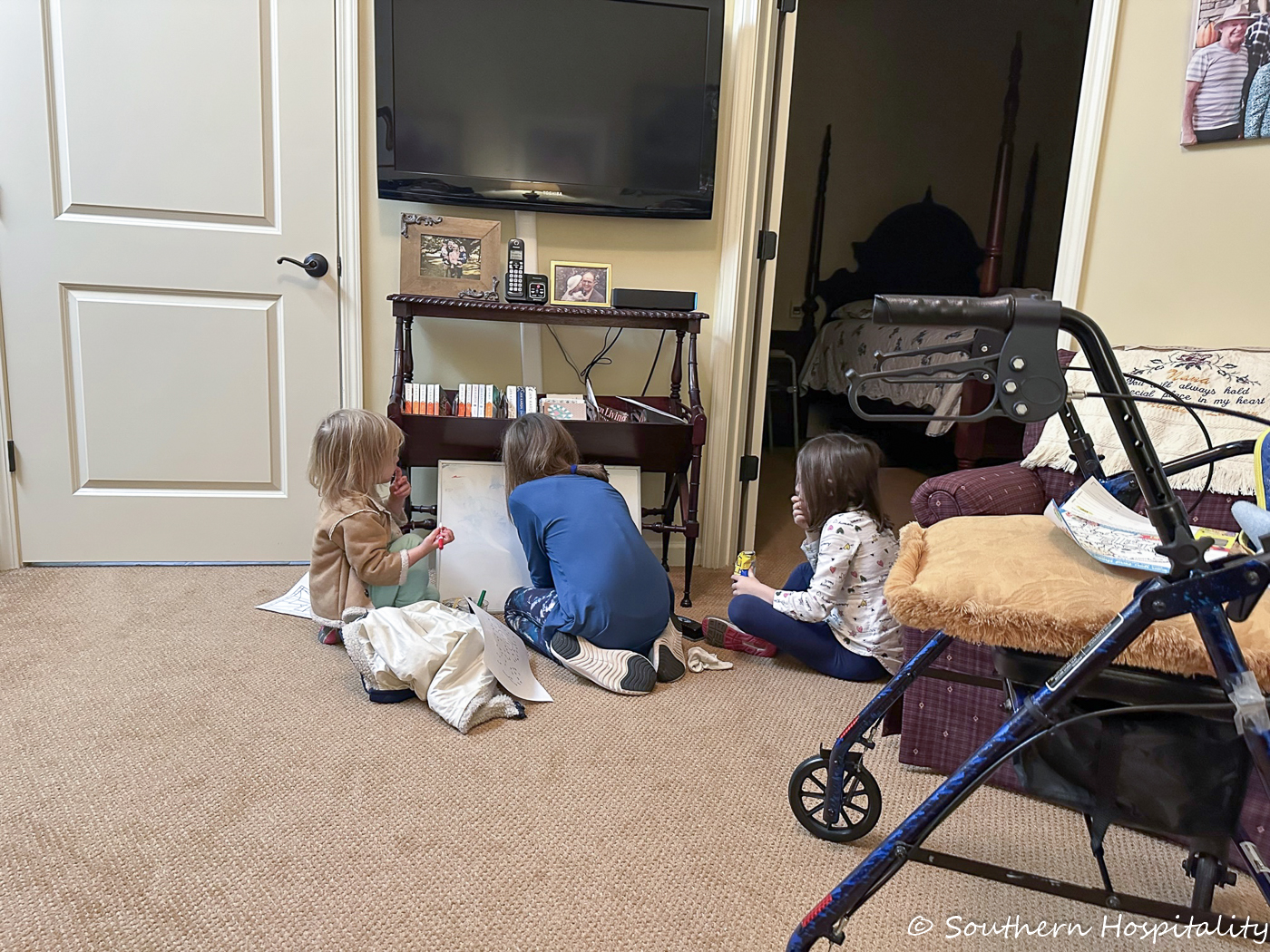 The girls hung out in mom’s room and wrote on her white board. Lauren’s family stayed next door at Holbrook. They have hospitality suites that they rent out to family and guests, so that worked out great. They had a 2 bedroom and it was perfect for their family of 5. And they could just walk over and see mom anytime. 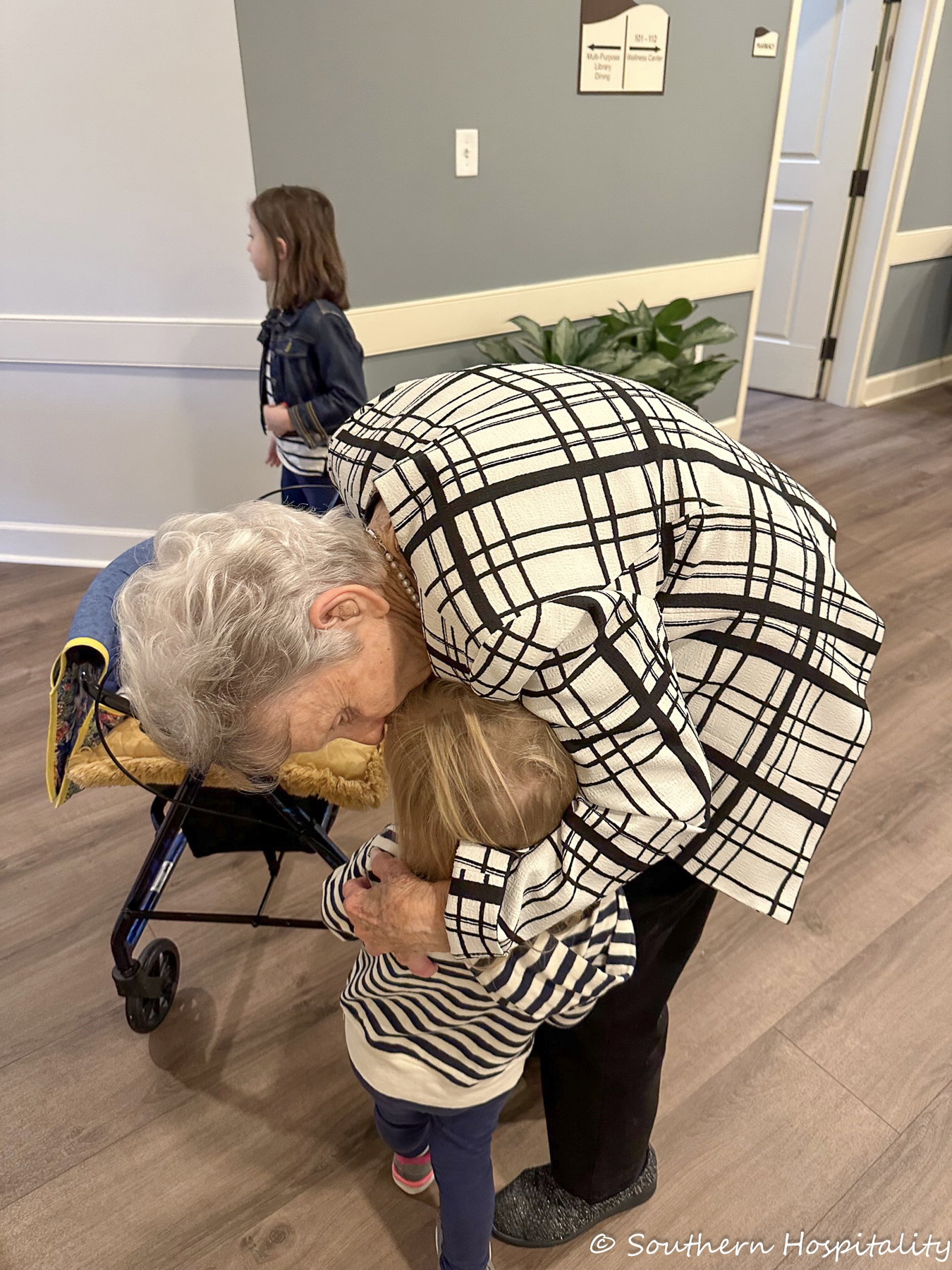 Mom saw them before they left on Sunday and Lauren got this shot of mom with Alex. So cute! We love having them all home and they are coming back for a few days before Christmas too.

So back to dad. I took him to his cardiologist after he got back from the hospital. Since he has been back, the workers over in memory care have been having to go in and get him up in the morning to get dressed and go to breakfast. He had been getting up on his own before, but he seems to be more tired. He’s laying back down after breakfast too and napping which he wasn’t doing before. After talking to his cardiologist, they did an EKG test while we were there and he didn’t see anything else too alarming going on. They did add a new heart medication for him to start taking, a beta blocker that is supposed to help his heart function better. His cardiologist said that in looking back at his records that his heart has been pumping at 50% for several years now, so it’s not a new thing. None of us knew this was the case, not even mom, so we all thought the diagnosis at the hospital was something new. So this onset of being tired might be a new normal for dad, we just don’t know. His heart is failing and one day it will probably take him, but we have no idea how long he can last like this. Apparently people live for years with partial heart function. So we leave him in God’s hands.

We were advised to get hospice involved at the early stage and he qualifies for extra care from them so that’s what we are doing. This will get a nurse in to see him once a week at his facility as well as extra care teams that will come in for personal care like shaving and changing clothes. So this will be a welcome addition for dad to get more people seeing him. Even in nice care facilities, they don’t always have enough people to go around for extra care. If he wants to take naps every day, then he should do that and be able to rest when he wants. We hope he will get some of his strength back, but if he doesn’t we just want him to be comfortable. He can still manage to get up and walk on his walker for now. He still has a great appetite and looks forward to those 3 meals a day, so we are glad about that. He needs to do what he feels up to doing and not any more than that. Watching someone get weaker is certainly not fun, but aging in general is a hard road. We are grateful he’s done as well as he has at 95 and we will do our best to make sure he’s comfortable and content in whatever days the Lord allows him to live. We are peaceful and know that God is in control of our days and we leave that decision up to Him. Thank you as always for being concerned about my parents and family. They are loved by so many people!