How to cover a lampshade with a simple method and using a glue gun. Cut fabric, fold and glue and before you know it, you’ll have a new lampshade 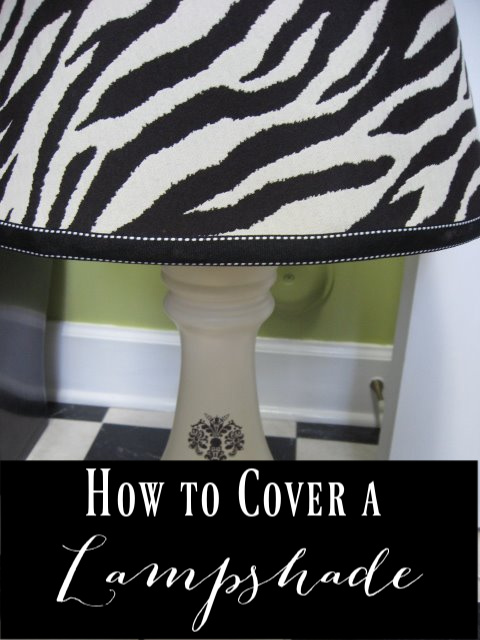 How to Cover A Lampshade 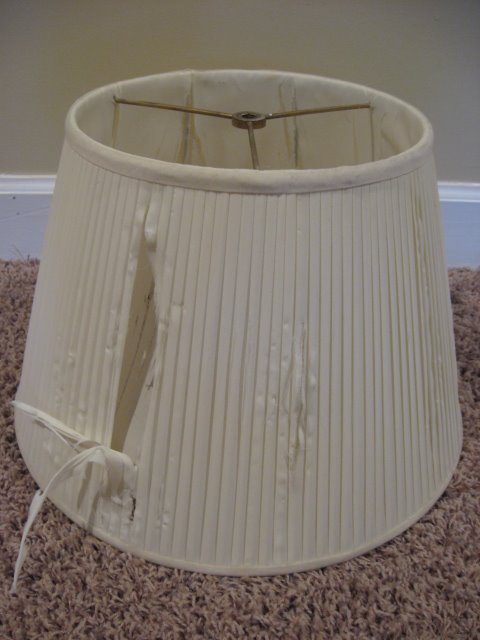 So, I’ve done a lampshade covering tutorial before, but thought I’d throw it in here again, with my newest project underway. You’ve seen the yardsale lamps I found for the guestroom redo & I spied some fabric that I really wanted to use on these lamps, so that meant recovering my own. That also meant I sure didn’t want to pay much for lampshades that I was just going to recover. So, back to the junk store that I told you about last year..where I found 2 of these beauties for $1 each…just right for this budget. You can see they were in sad shape, but the price was right. The fabric on there was literally falling apart, so I went ahead and ripped it off. 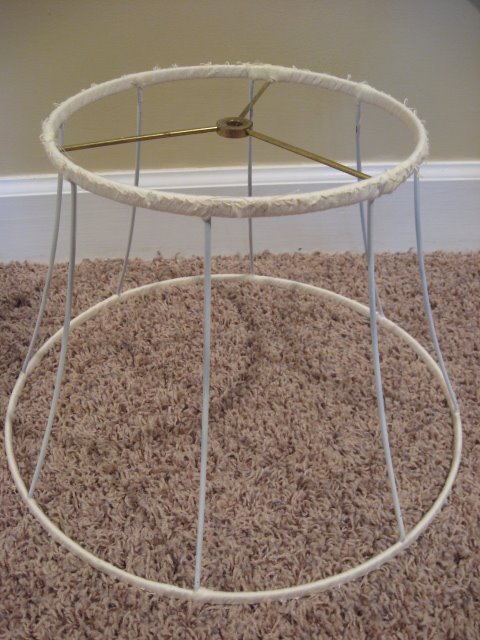 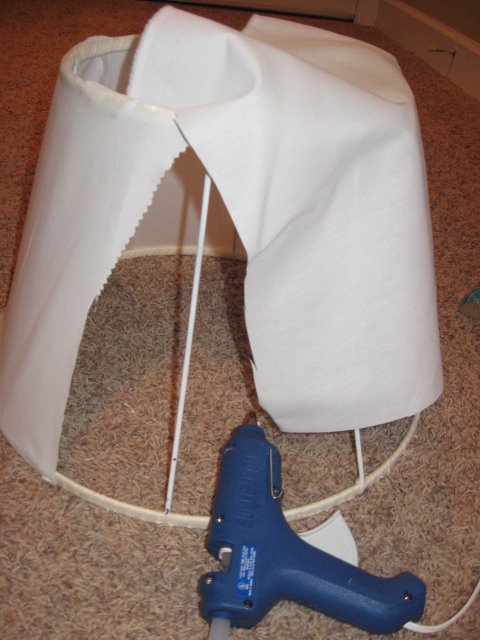 And pieced it together, hot gluing it at the top and bottom of the framing, overlapping it as I went around. I pulled it as tight as I could to get a taut framework for my new fabric. 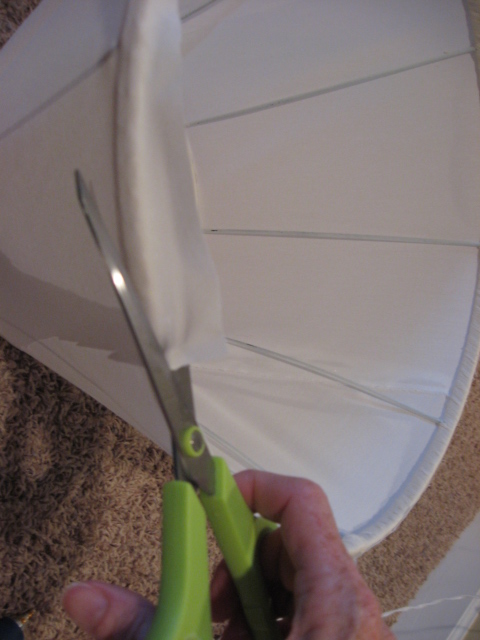 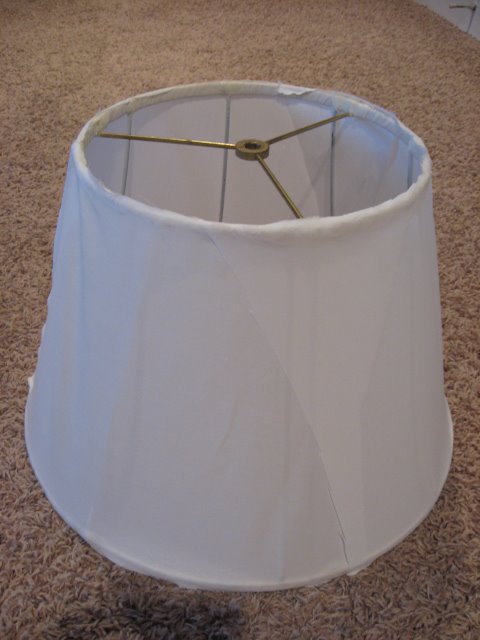 It looked like this when I was finished. Nothing pretty about it, but it’s not going to stay like this. 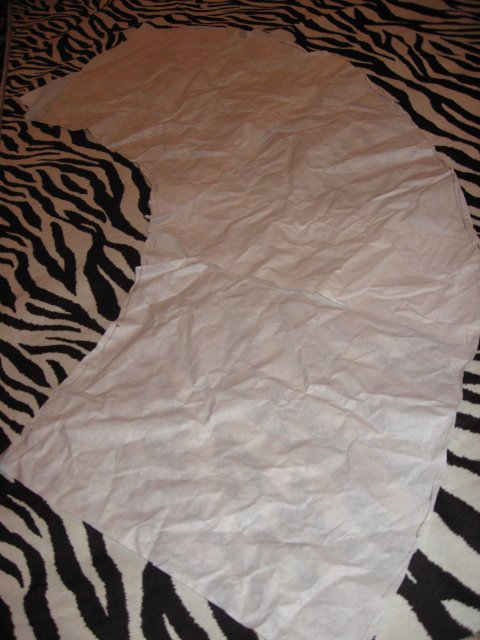 Found this pretty zebra fabric at Hobby Lobby (30% off this week) and picked up 2 yards. Enough to recover the lampshades AND to cover that pretty little Big Lots bench too. I showed you how to make a pattern for your shade before, but here’s a refresher. This is just old wrapping paper that came out of a shopping bag that is pieced together. Lay your shade on it and pencil around the top & bottom (leaving about 1″ above and below) as you roll the shade across it, meeting at the back. This gives you a pattern to follow when you’re cutting out the fabric. I cut out 2 pieces for my shades. I wing things a lot and didn’t even pin this down, just held with one hand and cut with the other. I take shortcuts like that. Did I tell you I’m not a perfectionist. Well, I’m not. 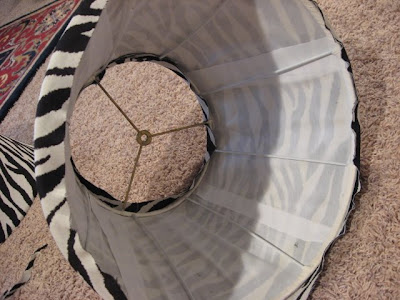 I missed a couple of pics, but next step is to spray the outside of the shade (on top of my white fabric) with spray adhesive. This stuff works great on a project like this. It keeps that fabric smooth and will help it lay down correctly. So above, I’ve already sprayed with adhesive spray and have started to smooth out the fabric. This part takes a little time, but you can pull the fabric back up and keep working with it until you smooth out the wrinkles. Work your way around until both pieces meet on the back of the shade. 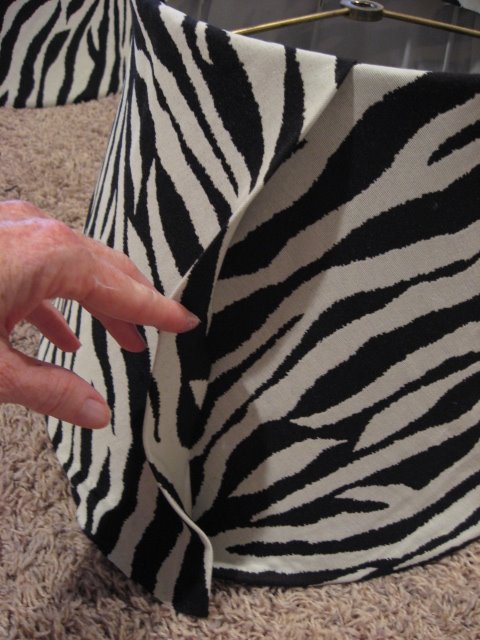 Then you’ll want to turn under one side and glue it down. I also take the iron and run over that seam to help it stay down. I used my glue gun to then pull and turn under the top and bottom edges just like the white fabric that I put on first. Pull and glue until you get it all tucked under the inside of the shade. You’ll have to trim it again with scissors. Doesn’t matter how neat the inside is anyway, that won’t be seen. I used a little fabric glue on the main seam but the glue gun would be fine too. I then added some simple ribbon from Hobby Lobby around the top and bottom of the shades with fabric glue and here it is…. 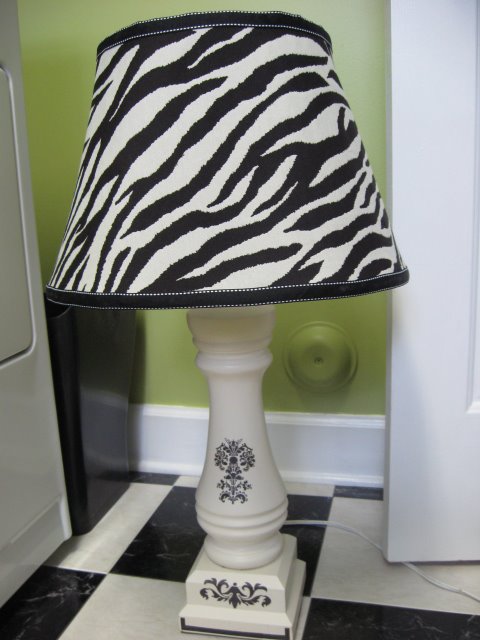 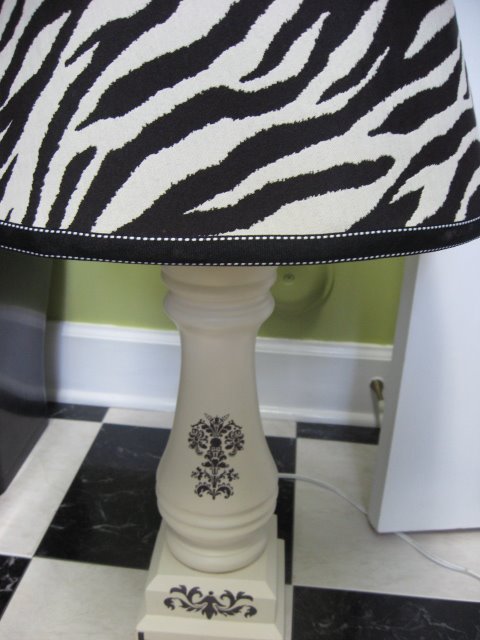 And they are custom lamps, one of a kind…even better! So don’t throw out those old lampshades. Look at them in a whole new light…get it?!