Today’s post is an update on my dad, since I know all of you love to hear about him and want to see what he and my mom are up to.   I haven’t really shared that much since Christmas as nothing really exciting has been happening lately, but this is a timely post that I knew you all would enjoy hearing about.

And by the way, I asked Dad if he would be OK with letting me share this story on my blog and he gave me the go ahead.  I told him that he has so many people who love him and that all of you would like to hear how he’s doing, this part included.

We (the girls in my family) have been after dad for a few years now to look into getting hearing aids.  He agreed one time, then decided no he didn’t want to, so it’s been back and forth on talking him into getting some help with his hearing.  If you have elderly folks around, you know what I mean, they can be very stubborn and set in their ways. He has insisted that he hears all he wants to hear or needs to hear and that he doesn’t feel like he’s missing out on that much. But we have observed over the last few years that he is not as interactive around groups of people like he used to be.  We knew that his hearing was a big part of that, but he wouldn’t admit it, nor look into getting help.

We’ve all known for years that he had hearing problems and it’s just gotten worse the older he gets.  Dad saying “huh” has become the norm of how we converse with him the last few years and that syllable has been said hundreds of times as he tries to follow conversations and we have to repeat things over and over.  I know it’s been hard on my mom because she is the one who talks and interacts with him daily.  It took all of us to talk him into it and finally, finally we got him to agree to go and get his hearing checked out.  Lauren took the reins and called Costco, after we heard what a good hearing aid program they have there.  This isn’t sponsored at all, but Costco is where we decided to take him since they have such a good money back guarantee program, as well as 5 year warranty and there is nothing to lose by trying them out. It took us awhile to convince him, but once the 3 of us girls (plus mom) go after him, he usually can’t say no for long.

We set up an appointment and my sister and I, along with mom, went with him to Costco to get his hearing test and see what the process would be for getting hearing aids.  We had heard too that the cost has improved a lot, since that was always a factor for him and he wouldn’t have spent the money on a really costly hearing aid.  Costco offers them for $1700 for the Premium set and all with a money back guarantee within 180 days, so there really was nothing to lose.  In fact, the whole family chipped in on the hearing aids because we really wanted him to get them and try them out and felt it would be a good thing for all of us if he was back to hearing almost normally again. 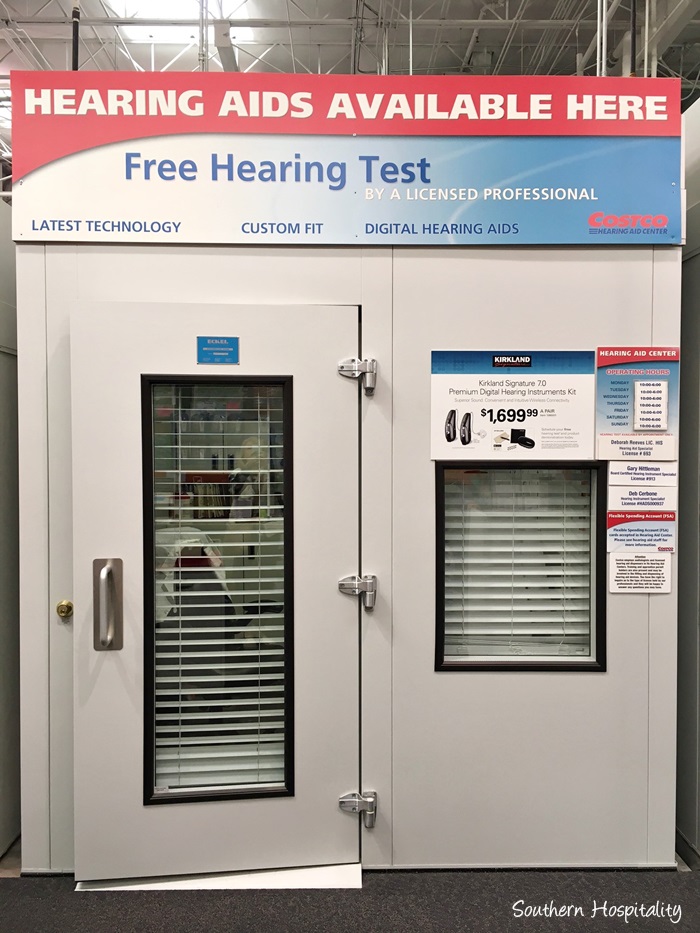 I thought this might be of interest to all of you out there in case you have a stubborn one in your family who might need some convincing on the hearing aid proposition.  We are so glad he finally went and I’ll be sure and share the progress of how he does with them.  So far so good!

My sister has a membership to Costco, so got us in and they have an area in the store all set up for hearing tests and getting the hearing aids ordered.  They have these little rooms to go in and take all the tests needed. 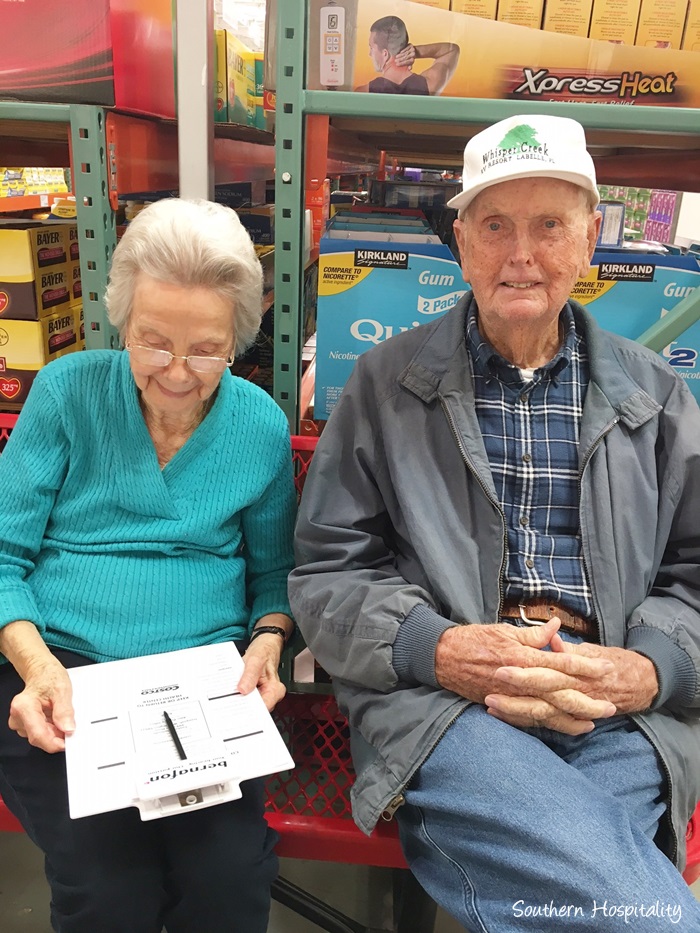 Mom filled out all the paperwork for him (that’s always her job) and then we went in the little room for the hearing test and hearing aids suggested for dad. 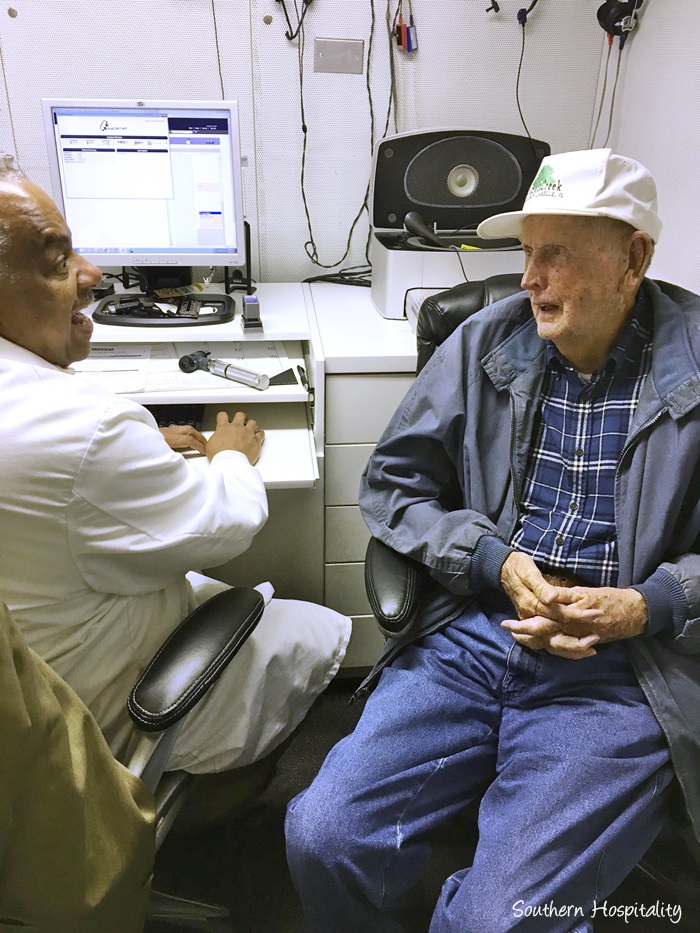 This very nice and personable man, Herndon, took care of the hearing test and walked Dad through the process so he could understand how it all works and he was put at ease all along the way.  Herndon was perfect for this job and did it all in a witty and humorous manner, getting lots of smiles from dad along the way. 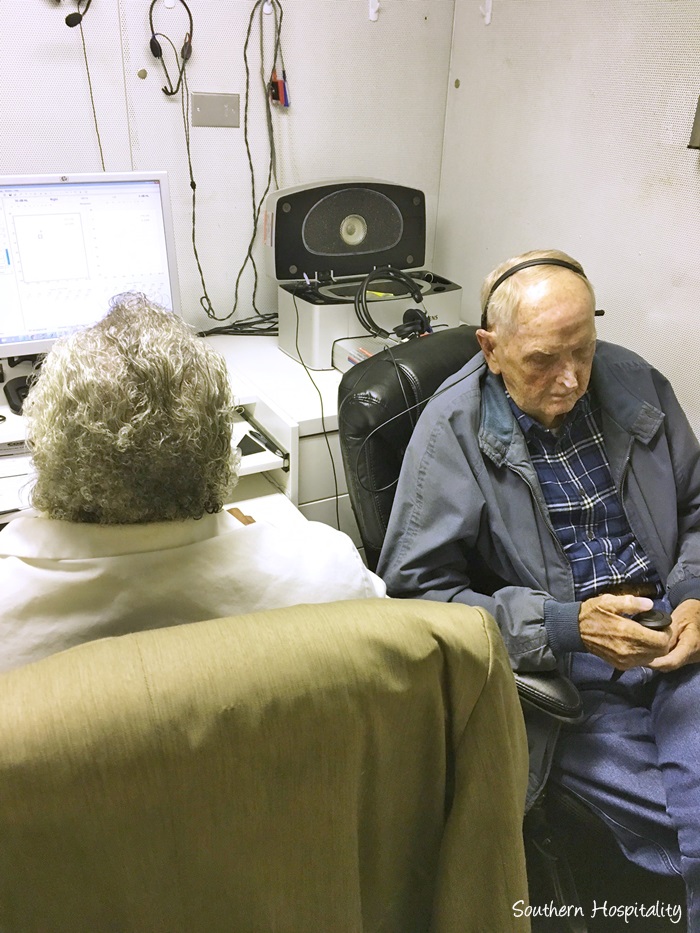 He went through the process of the hearing test and we got a report at the end.  Out of a 100% that is normal hearing, dad scored a 12% and 26% in both ears, which was hardly a good score. We knew that it was bad, but it may have been worse than we even thought.  The man could hardly hear a thing, so it’s no wonder that he didn’t do well with a lot of people around. 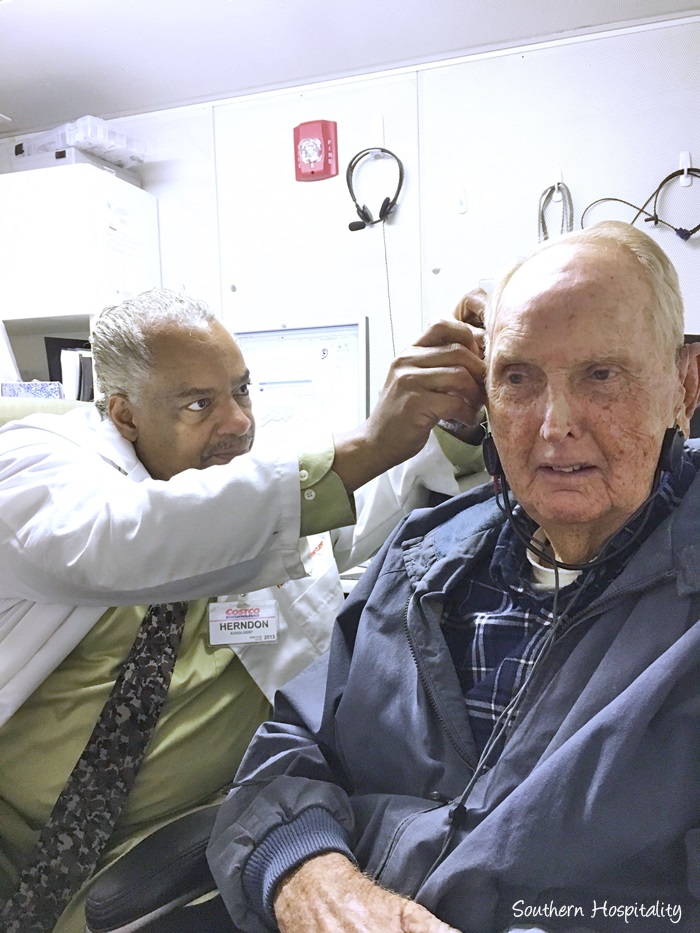 After the hearing test, Herndon put on temporary hearing aids so that dad could finally see what this hearing aid thing is all about.  I think he was pleasantly surprised how well he could hear after trying them on.  He walked around the store that day for about 30 minutes just to get a feel for how they work and he could tell an immediate difference in his ability to hear us talking to him.  We placed the order and then 4 days later went back with dad to pick them up and he got his own hearing aids. 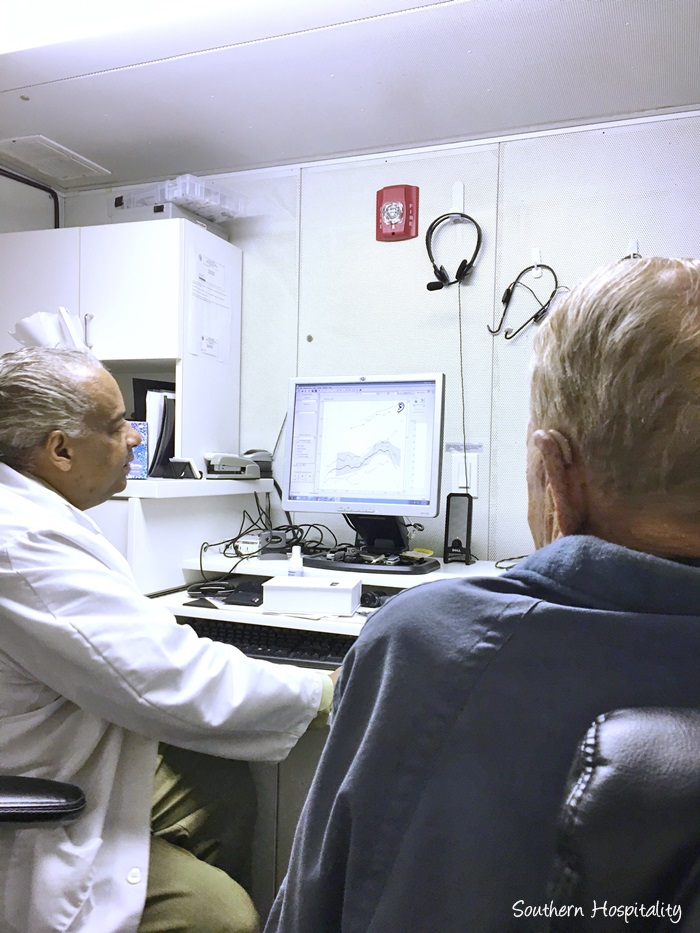 Herndon went through the process of getting his hearing aids set at the right level. These can be adjusted, but evidently the newest thing is to not have them adjustable at home, but to set them at a good level in the beginning and leave them.  He can always go back and adjust if needed, but these are supposed to be set for optimal hearing now.  He can look at his computer screen to make sure Dad’s set is set up just right for his hearing impairment.  Everything went well that first day and dad came home with his brand new set of hearing aids. 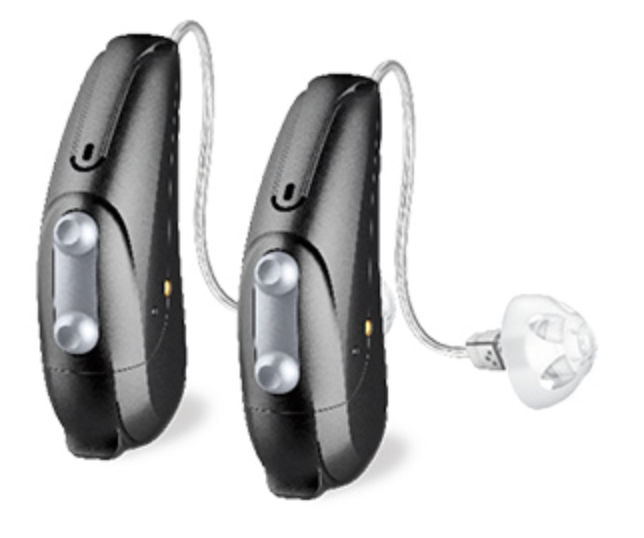 Here’s a shot of what they look like and they have many colors to choose from, so dad’s are a neutral skin tone that blend in with his ears.  You can barely see them in the above pic of the back of his ear. They hang over the ear and the earbuds go down inside the ear and the wire is barely detectable. 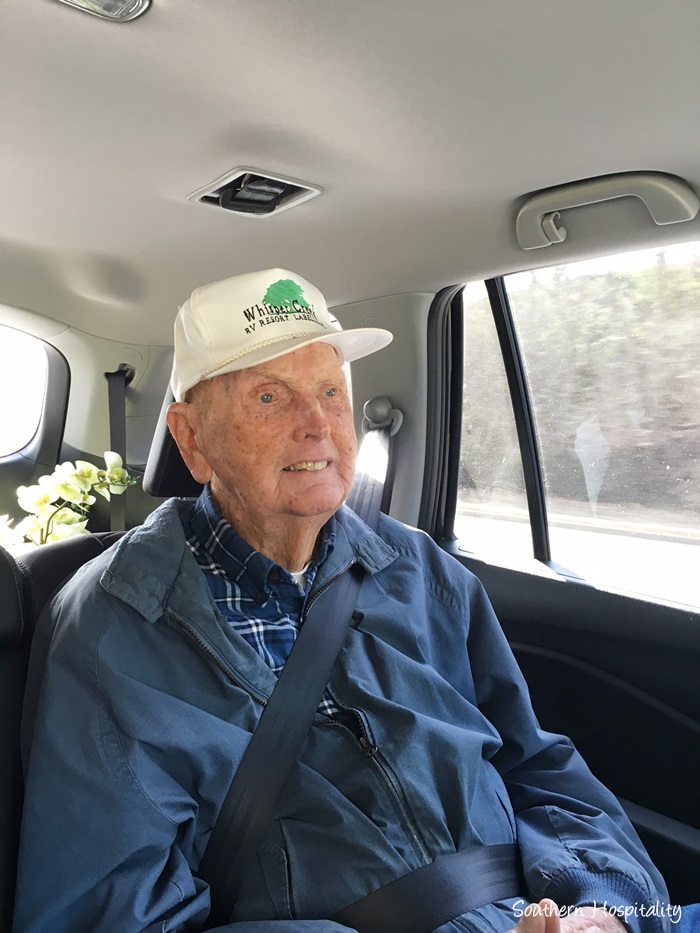 I talked to him from the front seat to see if he could hear me when I wasn’t looking at him and he could hear me just fine.  As soon as he got home, he went in and turned on the TV and came in and told us that it was an immediate big difference in watching TV with his hearing aids in.  We are so optimistic that he will get used to the hearing aids and really enjoy wearing them now.  It took a lot of convincing, but he just might be happy about it now. 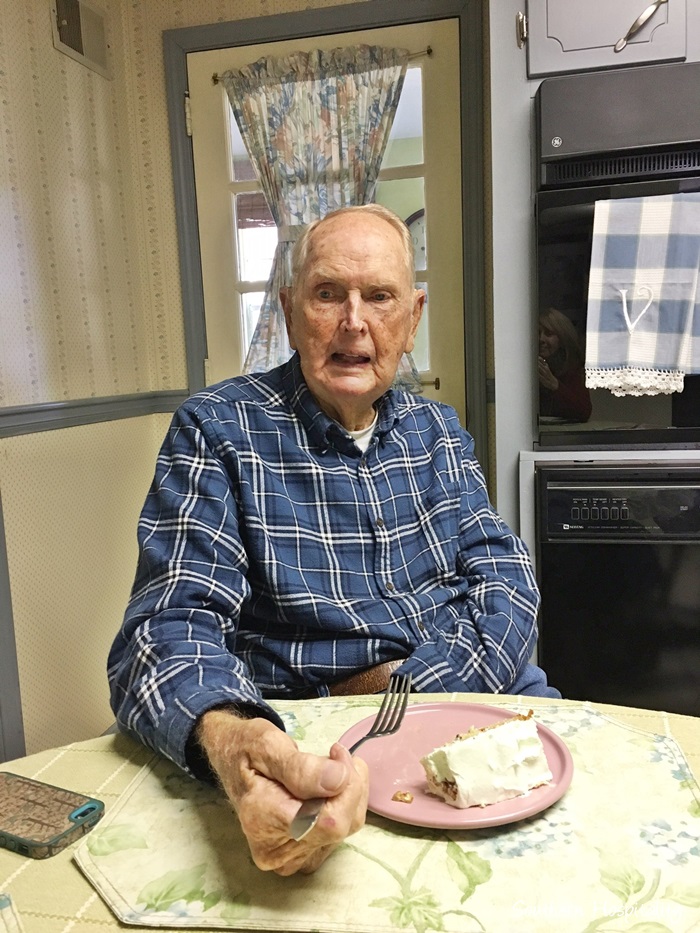 We all went home that day and ate cake that mom had just baked.  I’ll share that soon too, it was a real winner!

Dad has not been able to hear the preacher at church in a long time so I knew that would be a big test. I talked to Dad on Tuesday and he was able to hear and understand the preacher for the first time in a long time!  That makes us so happy!  He also said he can now hear the blinker in his car which he didn’t even know made a sound.  It’s been so long since he could hear well and I think he’s pretty tickled with the outcome.  He sounded very enthusiastic when I talked to him this week. We are very hopeful that he won’t give up on them and send them back. He has 180 days to try them out, but it looks like he is already adjusting to them and actually might be enjoying them.  He always said he wasn’t missing out on anything important (ha, his words!), but we think he was and now he’ll be able to keep up with the conversations around the table so much better.

I know how much you all care about my daddy, so wanted to share this update with you.  Life changes constantly with elderly parents and this year he will be 90 in July and mom will be 89 in May.  We know that the next few years can change drastically with both of their health and well being and we hope to have them with us for many more years to come.  Now here’s to better conversations with my dad!  We are so happy he finally gave in and went to have his ears checked out. I wanted to share this with all of you in case you have loved ones who may need to go to Costco too. We have nothing but good things to say so far about dad’s experience, but I’ll keep you updated as he wears them for a few months.