We had a nice Father’s Day this year with our Daddy.  We picked up BBQ from a local place and took it over to mom and dad’s to celebrate the day and let him know how much we love him.  We all enjoy BBQ and it was a good meal to share together.  He’s such a good Daddy and we always want to take the time to celebrate him.  He will be turning 90 next month and we have to figure out a time for all of us (including Lauren) to celebrate his birthday, since July is shaping up to be a really busy month for the whole family. 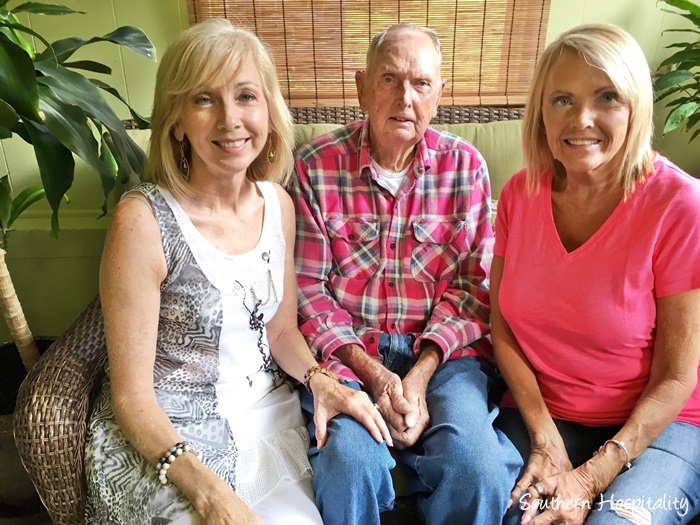 He’s doing pretty well for an almost-90 year old and we went out to the garden for a little stroll too. I’ll share that in a minute.

On Tuesday, we had a very scary situation with Dad.  He was in the kitchen getting his coffee when he started getting dizzy.  Mom saw it happen and asked him if he was dizzy and the next thing she knew he was falling to the floor in the kitchen and he hit the back of his head very hard on the tile floor. She had tried to hold him up but she wasn’t strong enough, thank goodness she wasn’t hurt too.  She called 911 and he was taken to the hospital immediately.  We all 3 headed to the ER to be with him and find out what was going on. They did a scan and found that he did have some bleeding on the brain, so he was admitted for an overnight stay where he was monitored for over 24 hours and then released to go home the next day. He does not do well in a hospital environment, to say the least and was more than ready to go home.  We all had to keep telling him that he could not go home with the brain bleed situation and it was very much a relief to all of us when they released him to go home.  Mom stayed at the hospital with him overnight and neither of them got much sleep, so it was a relief for all of us to send them home to rest.

All of this started with antibiotics that dad was prescribed for cough/cold symptoms a couple of weeks ago.  I know that antibiotics are necessary in many situations, but they can also be very harmful to the body too.  In this case, one of the main the side effects was diarrhea (which mom read after the fact) and several days after he was finished with his dosage, that kicked in, leaving him weak and dehydrated.  We think this is the cause of the dizziness which then caused the fall. He was about to visit his primary care doctor that day to address that situation.  It’s such a shame that meds that are supposed to help someone can also do more harm than good.  A lesson in looking out for loved ones when it comes to prescription medications.  As I said, antibiotics are a necessary treatment sometimes, but from what I hear it’s best to stay away from them if you possibly can avoid them.

We are so thankful it wasn’t a worse fall for him and he should recover completely.  He had a couple of stitches and now is home resting and getting better.  He’s a tough guy and it takes a lot to get him down. I know you all think the world of our Daddy, so I wanted to share this with y’all too.

EDITED:  Several of you asked in the comments about sending him birthday cards for his 90th birthday next month.  I would love to have y’all do that, so please email me ([email protected]) and I’ll give you my address to send the cards and I will pass them on.  I think it will make his YEAR!  Thanks so much for caring about my parents! 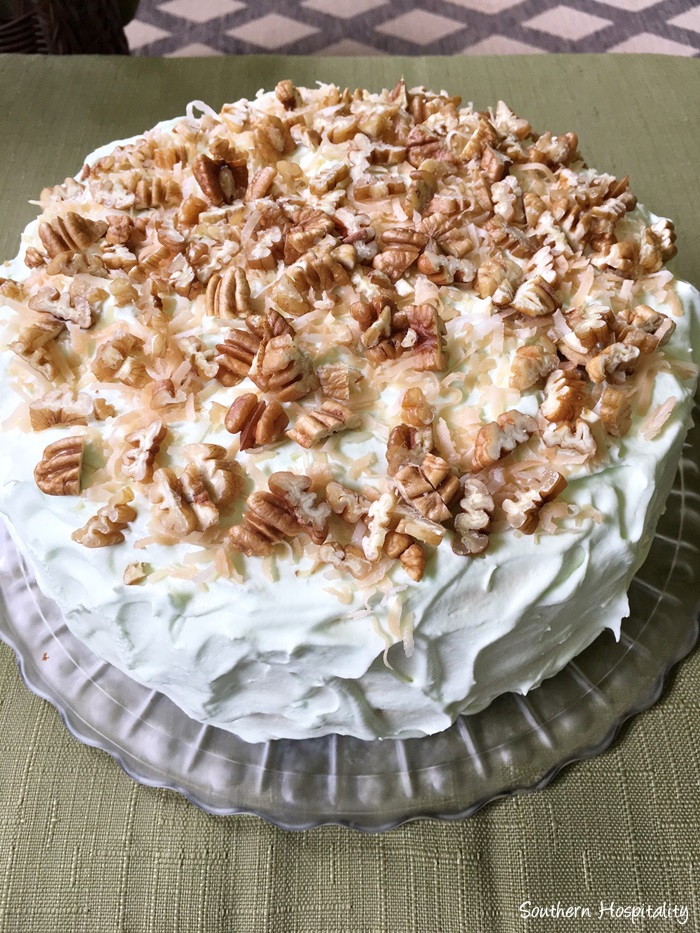 After lunch we had this delicious Pistachio Coconut cake that mom made, which I shared before. It’s a winner and really light and yummy! 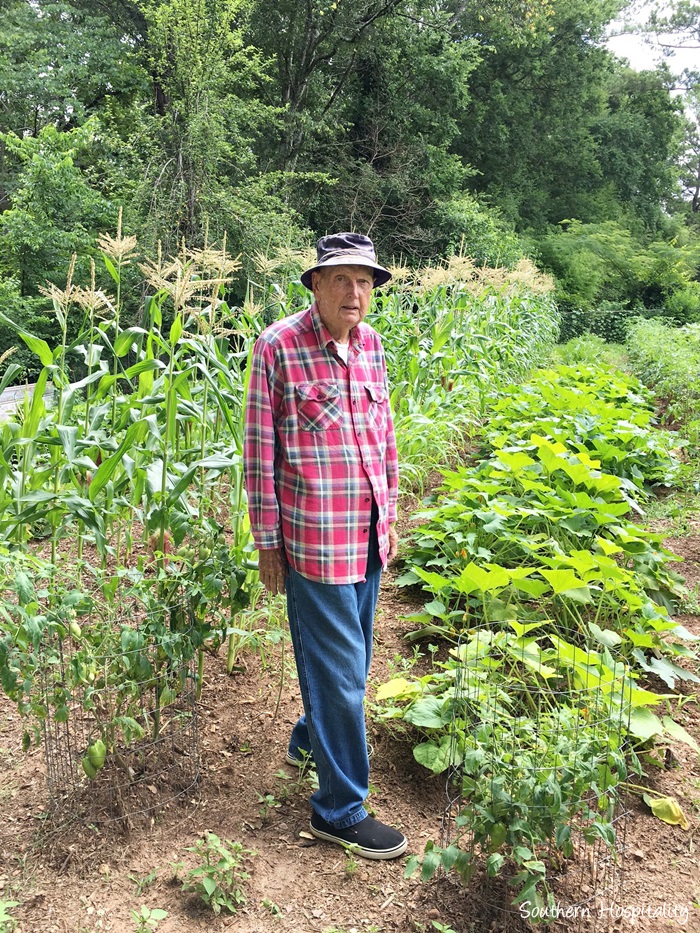 Dad and I went out to the garden to see how things are progressing this year. He’s always excited to talk about his garden, so it’s fun for me to see how much it’s grown. 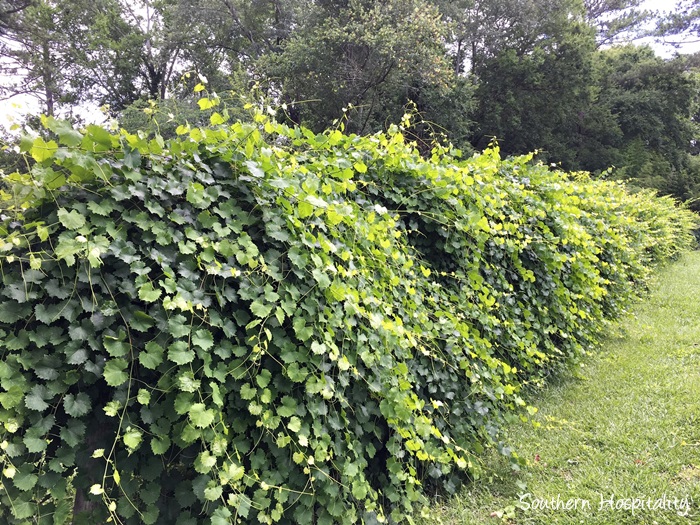 Muscadine vines are all looking great and I’m sure will be loaded again this year. 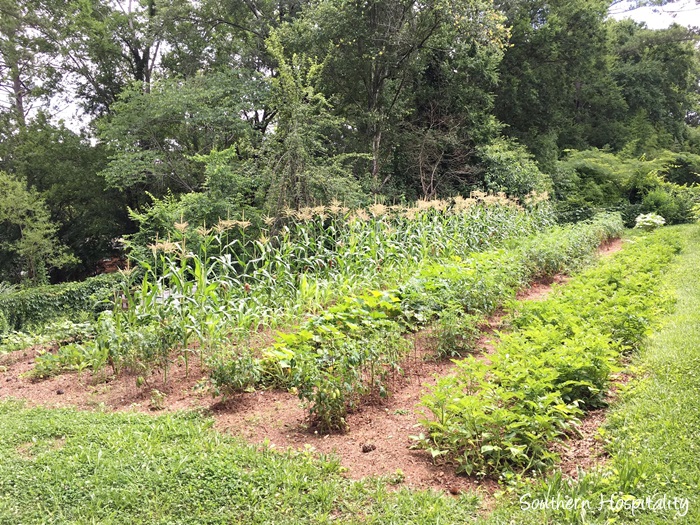 Here’s a glimpse of the whole garden from an angle.  It’s a pretty big back yard garden for one man to take care of. 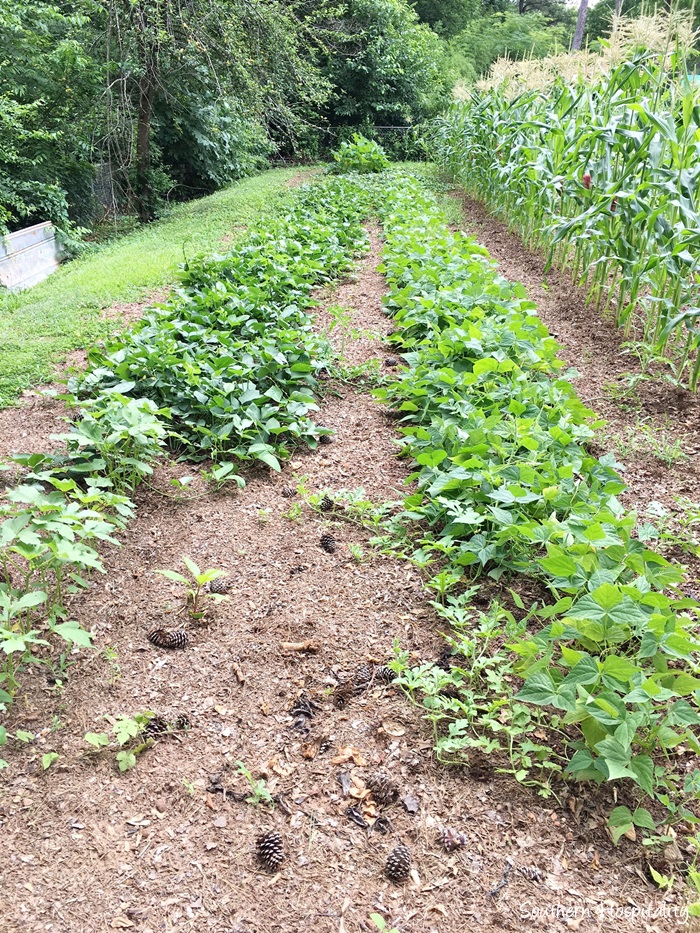 The back row has peas and beans growing. 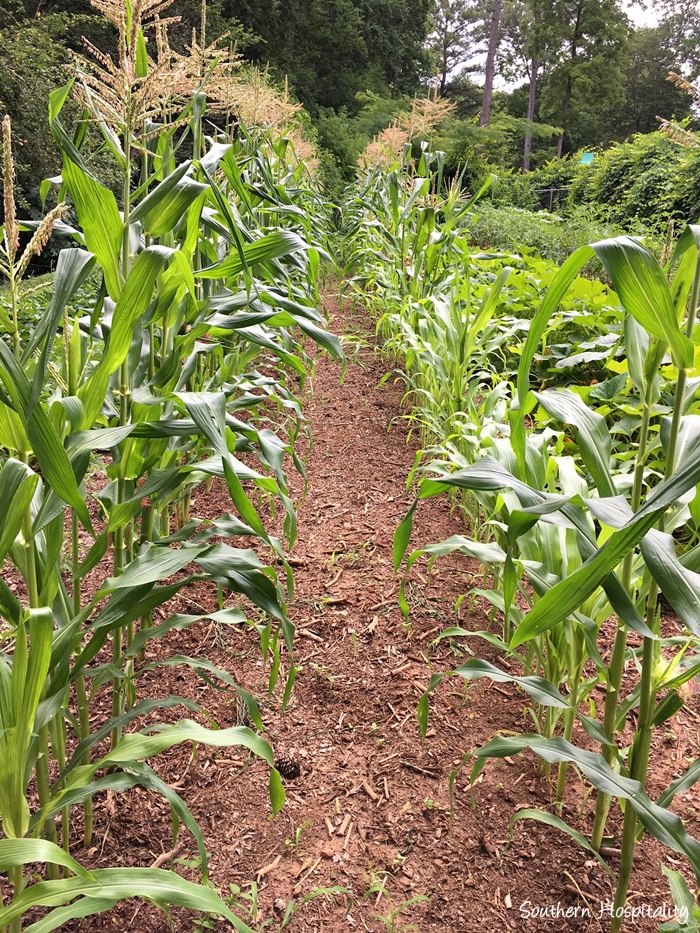 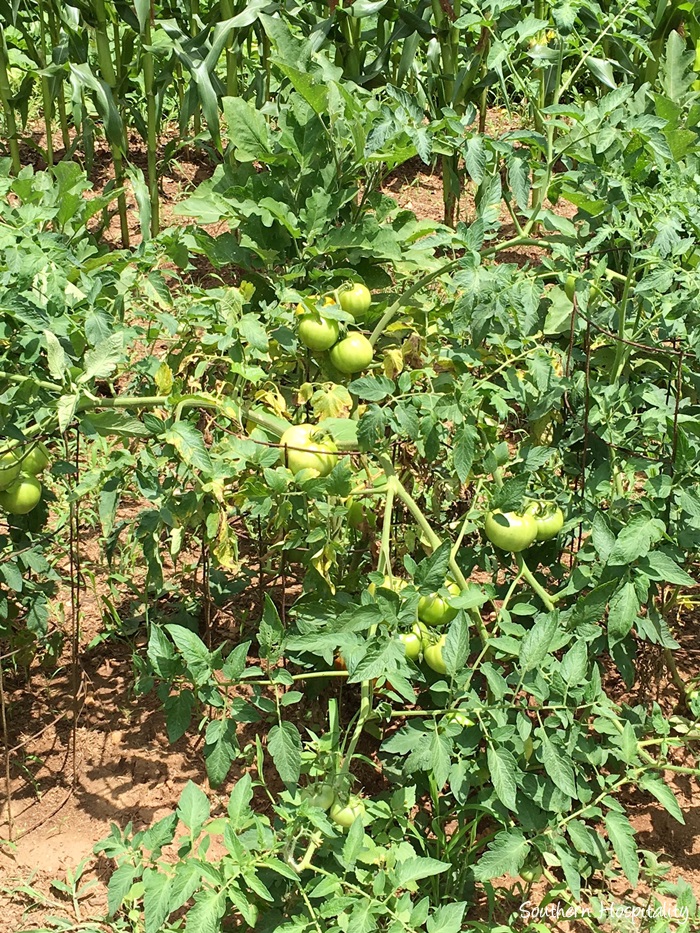 He’s disappointed in how his tomatoes have done this year, but we hope they will make it and grow lots more tomatoes. He planted Parks Whoppers and they have always done well for him, but this year he had some that wilted and died. That wilt is a strange thing that happens sometimes from year to year and it’s really a mystery, but seems to grow in the soil and mess up new plantings. 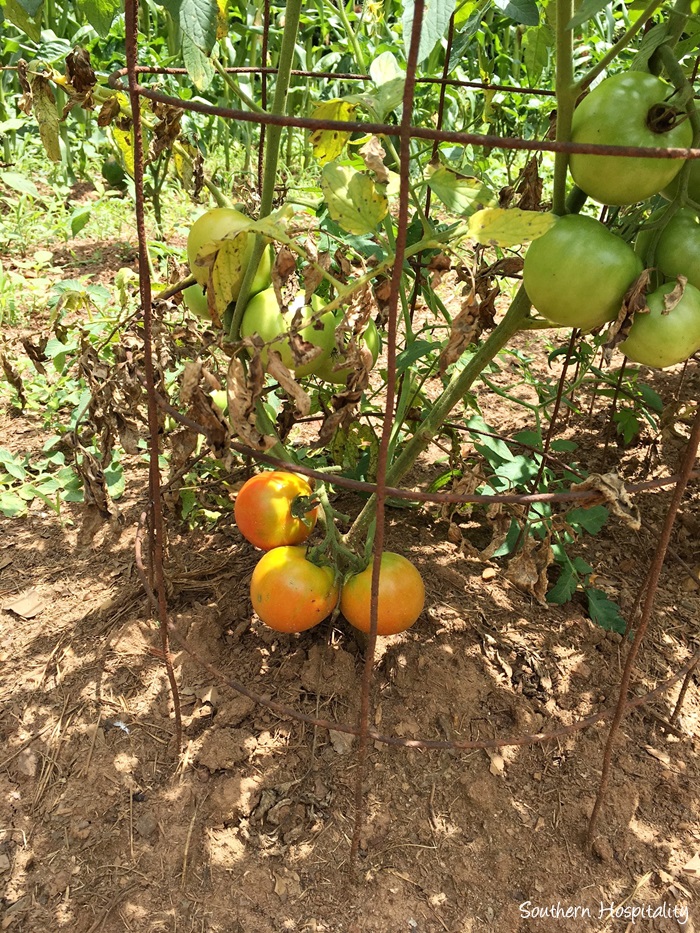 He’s about to start picking some soon though, so we are hoping for the best. They don’t look like they will be as big as they normally are though. 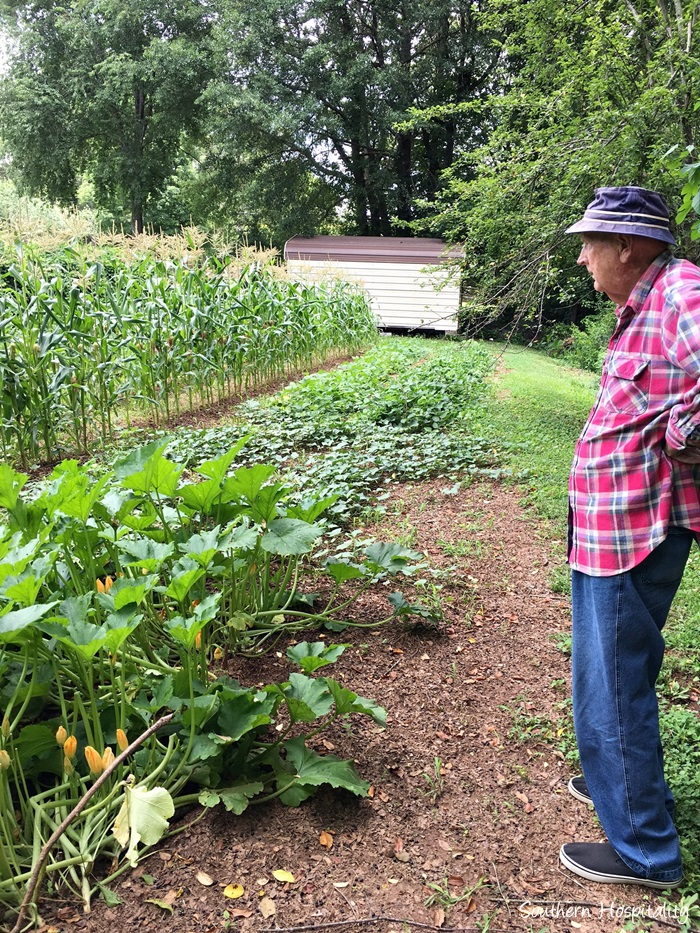 Squash in this back corner has been doing well, as well as zucchini. He usually has a bumper crop of those. 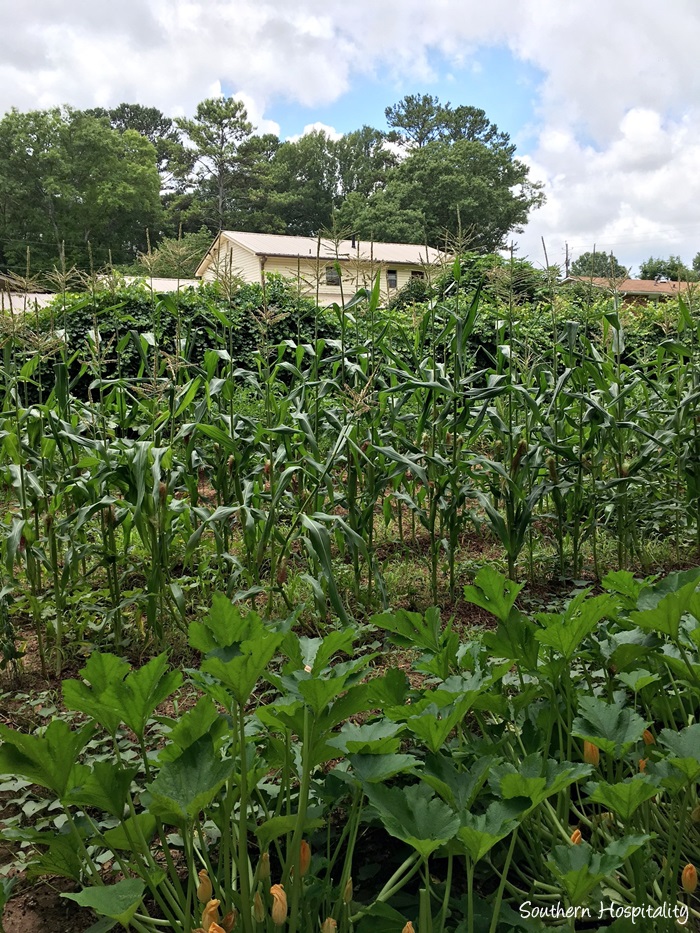 Looking back towards the house, you can see this isn’t a tiny little garden, it’s pretty big and spread out here in their back yard. Since he only planted the garden here this year and not in the mountains, he’s got plenty to keep him busy enough.  We’re glad he is slowing down and only doing one garden!

I got out my camera and did a little video with him, so enjoy hearing him talk about his garden!  It truly is his passion and we are happy he has it to keep him going every day.