Oh friends, it’s been a hard few days. We were all dreading the moving day for mom and dad to assisted living. Even though you know something’s coming, you don’t quite know how to prepare for it and life is so hard at this stage. I’ve had friends who have gone through this with aging parents with dementia and that makes moving and change even harder So even though we knew all that, it’s still hard to prepare for the actual scenario of moving parents to assisted living. One knew about the move and was heavily involved in the planning. The other one was blind sided, which is never a good thing, but we knew already by talking to dad about moving in general the last month that he would never agree to leave his house ever, so what do you do? You make the hard decisions for them and do what you have to do and that’s what my sister and niece and I have done for my parents. 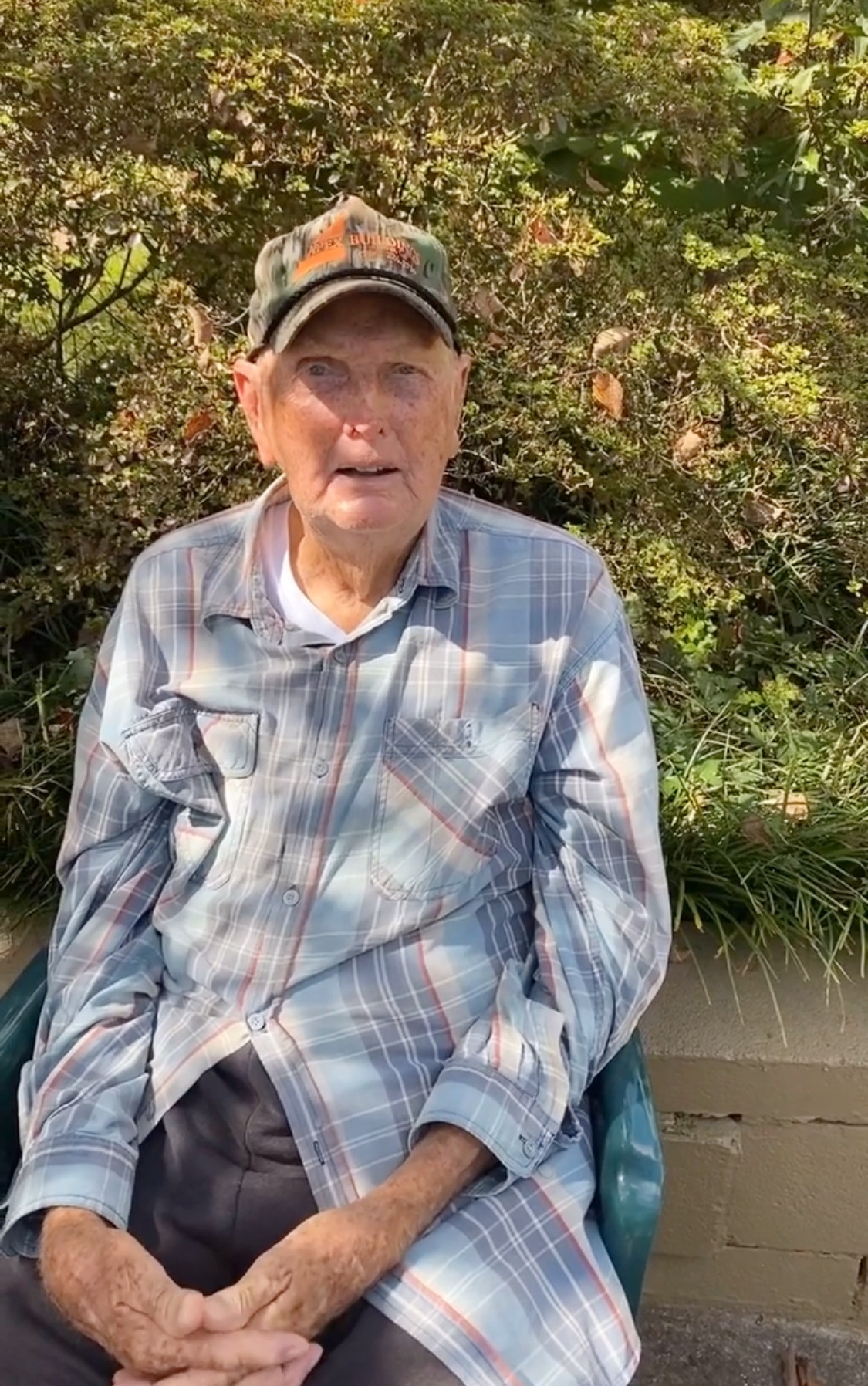 One day he’s sitting on his driveway under the shade and the next day he’s moving to assisted living. Lauren and Renee came home last Wednesday to prepare for this and we had our game plan in place, but it’s still not easy at all. We knew it would be bad and we were right. 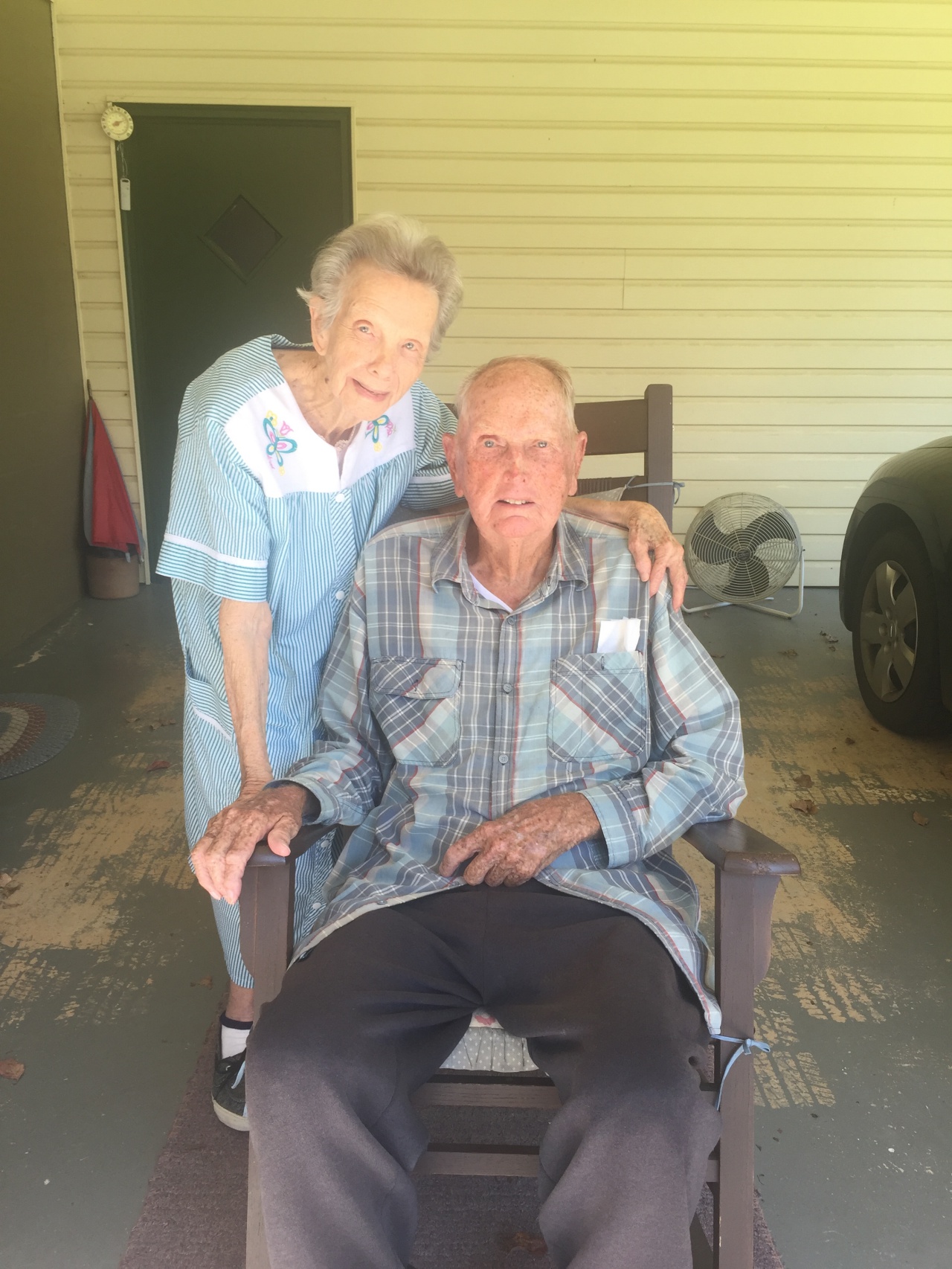 This was taken just before the move on their carport. Dad still thinks that he can take care of the house and that things are still running around there as usual, but the burden of the house, finances, meals, and everything else has been on mom’s shoulders for several years now, since dad’s memory has been going with dementia. He’s been on a memory med for a few years now, but it’s time to make some changes with that to help him through this time of life.

We had the movers all lined up and with precision timing, my sister and I, along with Bruce my BIL went over and packed up what they would need to take to assisted living to make their one bedroom apartment homey and comfortable for them. I knew all the suggestions. Take their favorite things and make it feel as much like home as possible. So we took their recliners, TV and their bedroom furniture and a few other things that would fit to make it as cozy as possible. I’ll show pics of that later on, but I wanted to give you all a quick update after the move on Friday. We got things looking so nice and comfortable. They have a private balcony and we moved their outdoor furniture out there along with my dad’s rocking chair and it will be a good place for him to sit outside, once he gets acclimated. 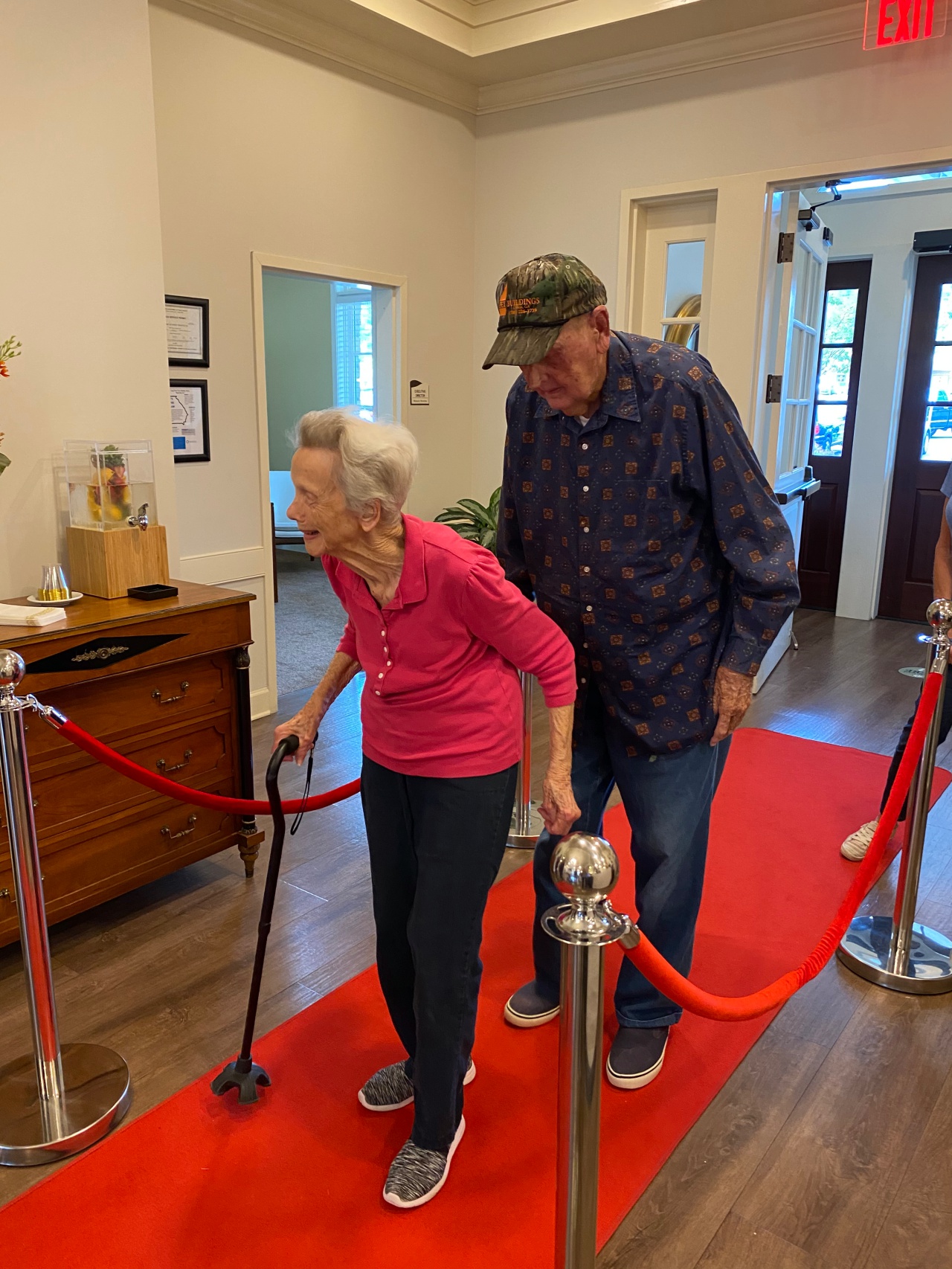 Lauren kept them occupied the whole day and then finally after 3:00 we were ready for them to come over. Dad was jovial with the big welcome at first, he had no idea why they were there, but he joked around with them as he can do with folks. We took them up to their room and gave them a tour around and then he began asking the questions.

Why are we here, what are we doing here? The more we talked to him the madder he got.

We are using the idea that they are there for 2 weeks for mom to get help and a break. That she’s no longer able to care for them and do their meals and all of the things that she’s been doing. A normal person could reason this out and do what it takes for their mate of 68 years, but a dementia person cannot reason. They only think of what they want at the moment. So no amount of reasoning with him has worked.

We have him on some anti-anxiety meds and they do help but we hope to reassess his dementia meds and get him on something that will even him out more with this new change in life. A move like this is so disruptive to the elderly person. Mom is very happy to move, she has accepted that they can no longer do for themselves and she welcomes a place like this that will take care of their needs and has 3 meals a day that she doesn’t have to cook or clean up. Keeping them in their home had gotten too hard and we all had to face that fact. 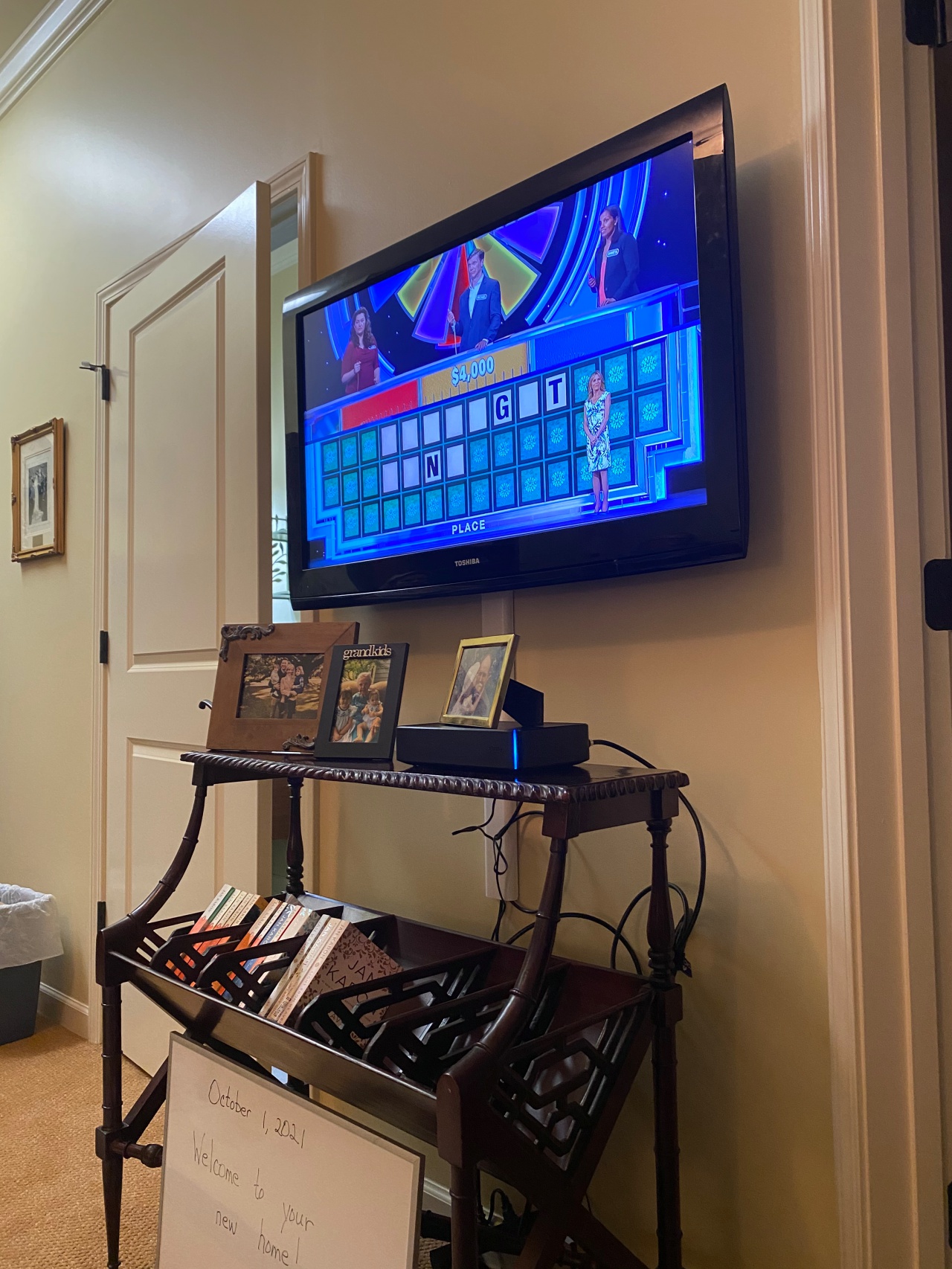 So their one bedroom with a living room and bathroom space, with private balcony is all they need at this stage of life. We hope that dad will come to accept this move and adjust accordingly. He threatened to walk out and walk home several times, but we just have to keep working with him and trying to be patient until he can adjust and come around. Many have told me they’ve gone through the same thing and that the person usually adjust within a few weeks. We hope it’s sooner than that and maybe with a change of meds, it can happen faster. He goes from nice and normal back to manic, asking where are his car keys, he’s not staying here and he’s going to walk out and leave. He can’t believe we would do this to him, he feels betrayed and like we have treated him so badly. He can’t seem to understand that we have to do this for both of them. Dementia is a cruel disease.

So we do what we have to do at the moment and one of us is staying with them 24/7 at the moment. That’s hard and we know that’s not sustainable for the long haul, but for a few days we will try to get by. We can’t have him walking out the door and wandering the street. They do have memory care in this facility and he would have to be separated from mom to go in there, but that’s a possibility too for a short time. We hope he doesn’t have to do that, but we have to do what works too. 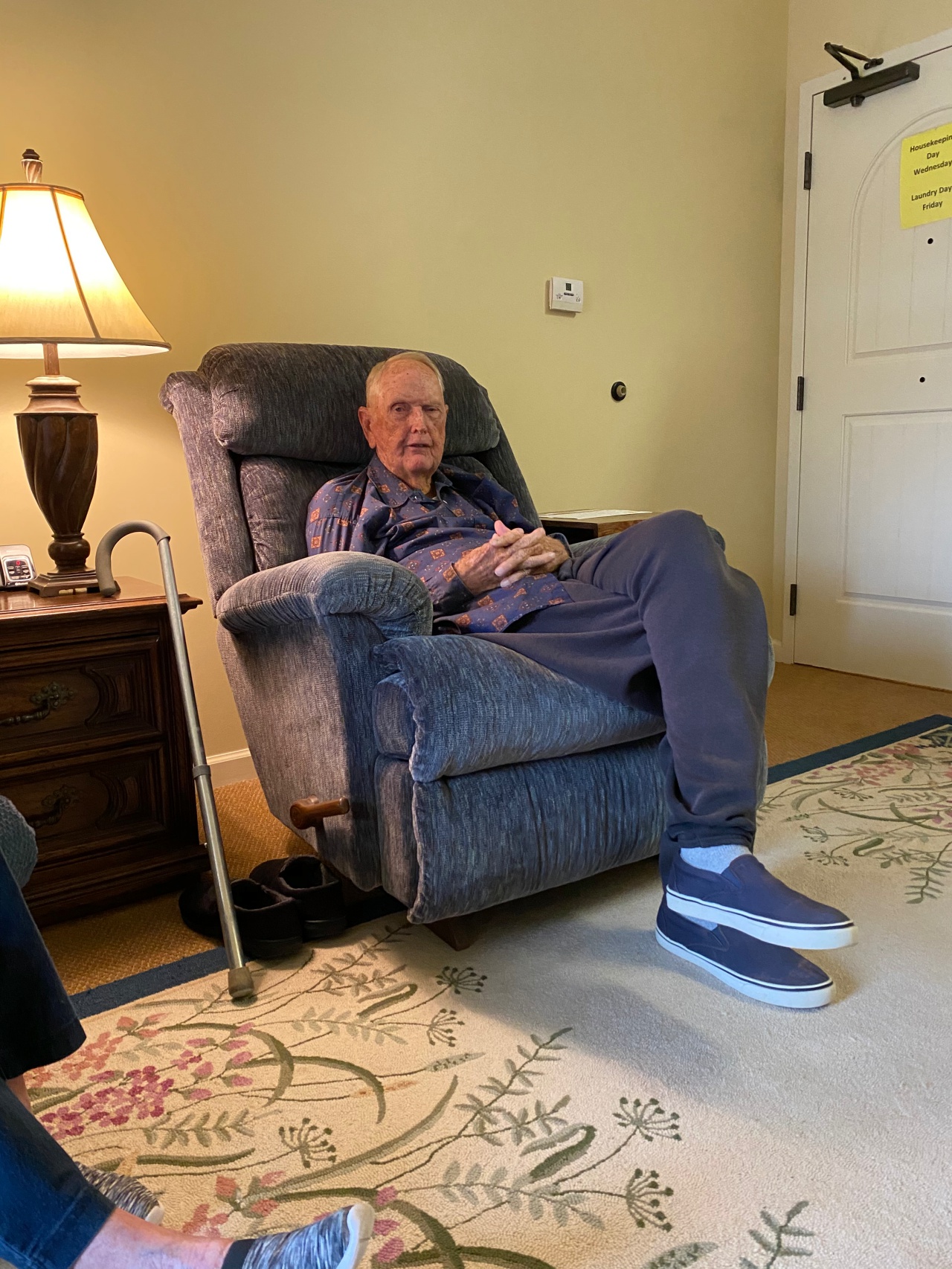 He’s got his favorite chair and they have everything they need here, including 3 meals a day. We sure hope that he can adjust and get used to the place. It’s been a hard road, but we are glad the move is over. We knew he would not react well so we weren’t surprised at his mood and anger, but we sure hope for the best. He goes from happy and normal back to mad and mean and we know that’s normal with dementia. Doesn’t make it easy, but we know it’s normal.

So that’s the quick update on the move. I know that so many people have been praying for us and we feel the prayers, so thank you so much. It’s a hard time and I know that so many of you have been through this same thing too so it helps to read your sweet notes about your own experiences. We have hope that he too can adjust and fit in and their new assisted living. It’s such a nice facility and it’s 5 minutes from my house, so that is such a good thing. I know we’ll be visiting there often and I look forward to the day when dad is settled in and actually liking where he lives now. We can’t go backward, we must continue to move forward for them. They have had such a wonderful blessed life and we are thankful for that. We hope these last years are comfortable, safe and that they can relax and enjoy their final years here on this earth.

Mom is already feeling more relaxed with the burden off her shoulders. I want that for her so much and we pray that daddy will adjust and do this for her. With dementia they can’t even reason compassion for someone else at times and he has a hard time letting go of his own feelings of loss and doing it for her, but we know that he can adjust. Mom will also have to grieve their house and moving on from the life they had there. I know it’s hard for both of them, but mom is accepting and ready. Thank you again for the prayers. It’s going to be a long road, but we hope sooner rather than later he settles in and adjusts to this new way of living in assisted living. It’s such a great place for them! I’ll be sharing more later as things progress but wanted to fill you all in on the move. It hasn’t been an easy weekend at all, but we are hopeful. Always hopeful!