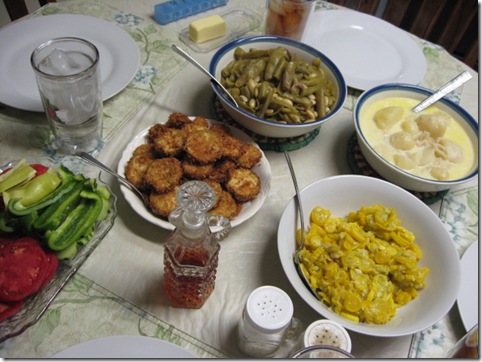 Going home is always such a treat. I just love my parents and they have always, always been my rock and are to this day. Mom still cooks up a storm and last weekend was no exception. She whipped up this meal of fresh veggies for our lunch last Friday and man, oh man, was it good. Fresh tomatoes, peppers and cucumbers, along with green beans, potatoes and dumplings, sauteed squash and that dish in the middle is fried eggplant. She uses Panko Japanese breadcrumbs for those and it is delish! I came home with a pile of veggies myself and cooked it up this week. I still can’t fix my veggies quite like my mama does though! She’s had years of practice. 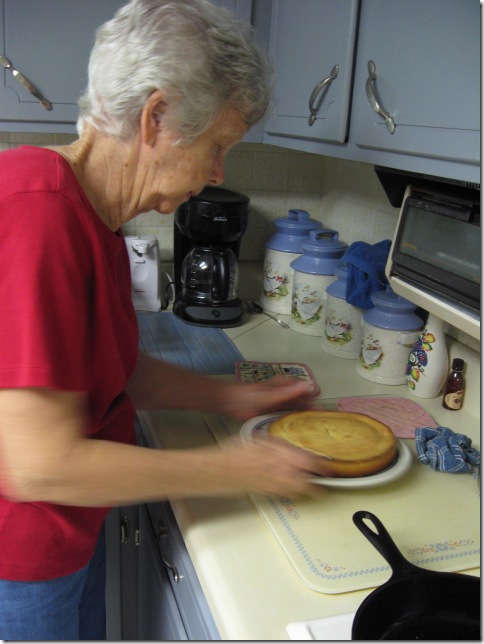 Mom taking out the cornbread from the cast iron skillet. She can make some mean buttermilk cornbread. 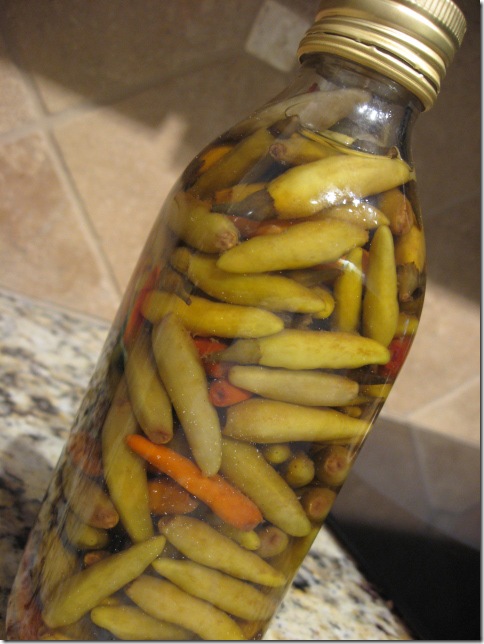 Mom sent us home with some of her homemade pepper sauce. The best on turnip and collard greens, which Peter hopes to grow at our house this year. 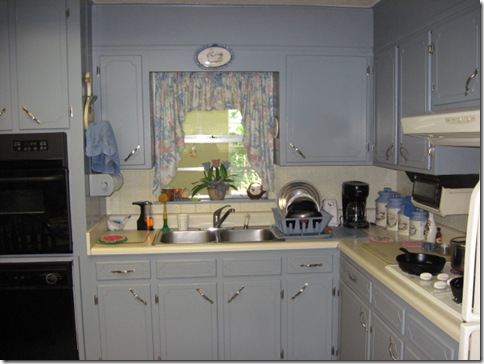 This is the house I grew up in from the time I was 16. We lived in the house next door to this one originally (a 3 bedroom brick ranch) and then my dad built this house when I was a teenager. The cabinets are painted blue and my mom still has plenty of blue and mauve around. She is NOT into decorating, so I have no idea how my sister and I got so much into it, but we did. She cares not a whit about keeping up with trends, much less with the Jones’s. They live a simple and frugal life and that’s no doubt why they are so blessed with good health. It is not a fancy house at all, very basic, but it’s home to them and they have no desire to move anywhere else. Many a fabulous meal has been cooked in this tiny kitchen over the years. 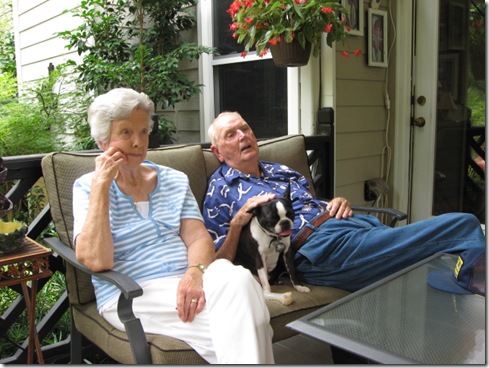 As I mentioned, we celebrated my day’s 82nd birthday over at my sisters. I forgot to take a pic of the food, which was pork chops with side dishes (got too excited and dove right into the food), but I did take a pic of the pound cake I made. Here are my parents sitting on the deck enjoying the good weather we had that day. It wasn’t too humid for a change. Buster’s getting some attention from my dad. Buster is a lap dog. 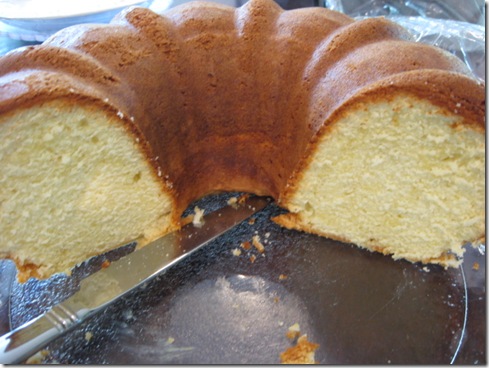 I made this pound cake again (only this time I substituted cream cheese for the cream), a good Paula Deen recipe. My mom made a churn of homemade peach ice cream and we all pigged out. 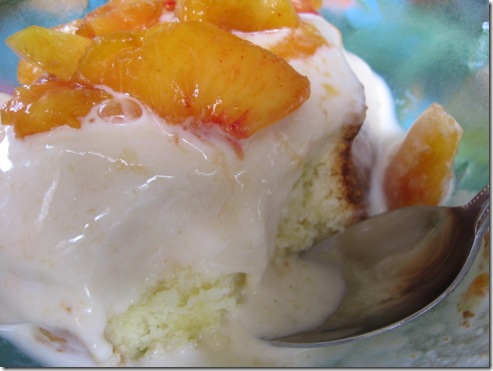 I sliced up fresh peaches to go with it and it was absolutely a perfect summer treat. We grew up making homemade ice cream with a hand-cranked churn (I always sat on it to keep it from moving) and I have some very fond memories of eating that homemade ice cream, usually vanilla. 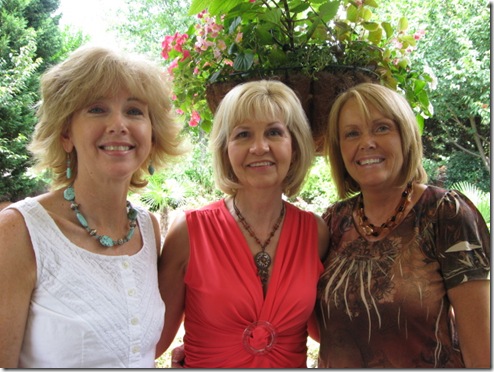 (me, Beverly, and my sister, Renee)

This is Beverly, an old friend of our family, and we invited her and her hubby over for our celebration. It was great to see her again. You see, we go way back with her big, extended family in Marietta, since her daddy and mama were one of the original families in the church when we moved to Marietta in 1963, the summer before I would turn 7. My dad became the pastor of the small church that he led for 27 years and her parents and mine have remained close over the years.

There are 7 siblings in her family, so they are a big bunch and here’s a fun little tidbit for you. She’s Travis Tritt’s aunt. Yes, the grammy-award winning country singer. Travis’s mother and Beverly are sisters and we know all of their extended family. Precious people. Travis grew up in my dad’s church as a little fellow, singing and playing his guitar in church. He had such a great talent, but we didn’t dream he would make it as far as he did, but he certainly did make the big time in country music. We’ve stayed in touch with this wonderful family over the years and after Beverly’s parents both passed away in the last 5 years, her daddy just in the past couple of months, my dad officiated the funerals for both of them, as well as Travis’s own father, who also passed away very recently. A finer family you will never find and it was great to catch up with her and hear about the rest of the family. The last time I saw Travis was over 4 years ago at his grandmother’s funeral and he was just as friendly as he’s always been, hugging each of us and catching us up on all he’s been up to since he became a country star. We have fond memories of Travis growing up as a small boy singing in church.

In fact, he wrote a song later on during his career called Bible Belt, which was written about a scandalous time in our little church involving a sordid affair with some youth leaders, when Travis was in the youth group choir which was traveling and singing that summer. It all came to a head during that trip while they were in fact, in Alabama at a church on a Sunday morning and the incident left an indelible mark on all of those young people, I’m sure. When the song came out and we heard it for the first time, we had to laugh all those years later at how awful the whole thing was at the time. That was just one incident that my dad had to deal with as a Pastor. Ahhh, the life of a Pastor is not easy. I was away at college during that time and my mom filled me in on the phone of all the goings-on.

Now, here’s something I’m going to put on here that I’ve never done before. My mom likes to keep busy during the winter months and has always done some sort of needlework. She got this set of 7 dish or hand towels out when we were home recently and showed me what she had been working on over the winter. These are all angels, all hand stitched by my sweet mama on a white cotton pique dish towel. She just does it for fun and had never thought about selling any of these, but she really didn’t want to keep them, so I told her I would put them on my blog to see if anyone would like to buy them.

I figured a fair price would be $42 for the set of 7 towels and I’ll even offer free shipping. So, if you are interested in buying these towels, please let me know by leaving a comment OR by emailing me. The first person to let me know will get them. That’s $6 each. 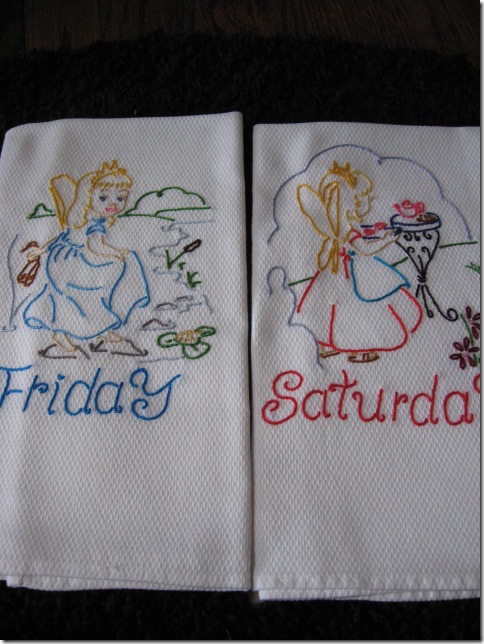 She did a great job with them. Neither me nor my sister or niece really collect linens like this, so none of us wanted to particularly keep them, so I hope one of you would like them for your collection. Especially if you love angels. 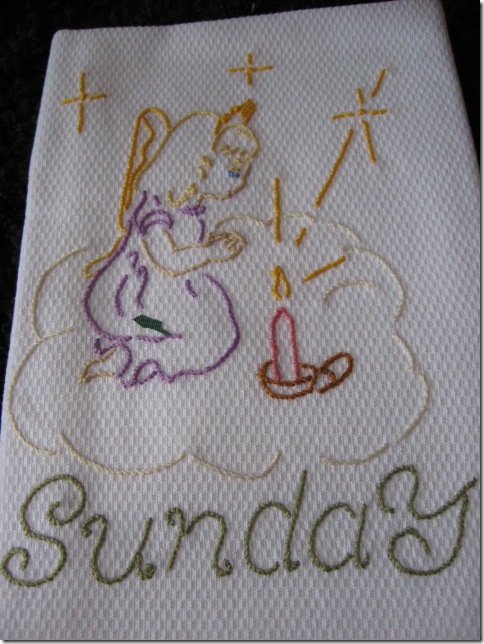 Thanks for going home with me!