My friends, Layla and Kevin, were shooting a pilot for a TV show last week over in Suwanee, GA for HGTV!  This was my first time behind the scenes of the makings of a TV show and WOW, was it interesting, exhausting, and busy.  My hat is off to the folks who tirelessly do these shows week after week.  You wouldn’t believe how many hours are spent behind the scenes getting a 30 minute TV show on the air.  It’s amazing!

Layla invited me to come over and help and that’s what I did.  My cousin lives on that side of town, so I spent 2 nights with her.   I am so excited for them and hope beyond hope that their pilot show is picked up by HGTV and they run with it.  I just know it would be a huge hit if that happens.  There are no guarantees in TV either, I have found out.  Even a pilot show has to go through all the approval processes and red tape before it ever hits the air.

So, join me on a little peek behind the scenes on a TV show taping.  There were several volunteers/bloggers who showed up day after day and I was there every day.  The reveal was done last Saturday and I wouldn’t have missed that.  After all the work put into the room, I couldn’t wait to see what the homeowners thought about their new space.  Unfortunately, I cannot show the final room here on my blog.  It will have to remain a mystery for now!

Layla wrote all about it today too!

Take my word for it!  It was fantastically beautiful and the young couple, newly-wed homeowners were over the moon excited. 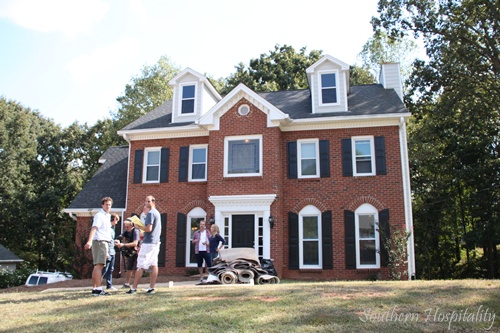 Here’s a peek at the outside of the house.  They got a fantastic deal on this foreclosure.  It has great bones and just needs some updating from it’s 1980’s datedness.  When we drove up the first day, there was a huge pile of ripped out carpet out front. 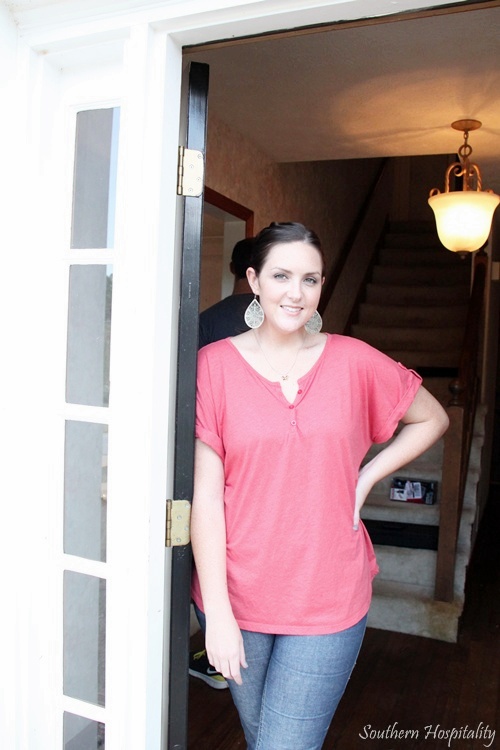 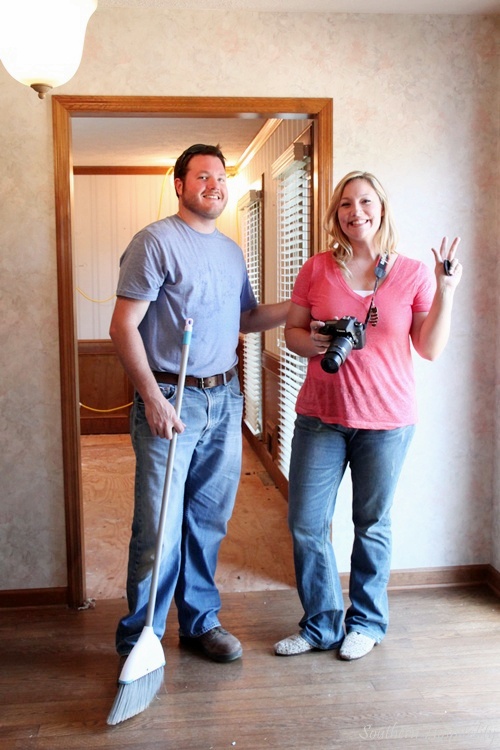 This is my sweet friend, Shaunna, from Perfectly Imperfect, with her hubby, Matt.  They came up for the whole week from their home in AL and worked tirelessly on so many projects. 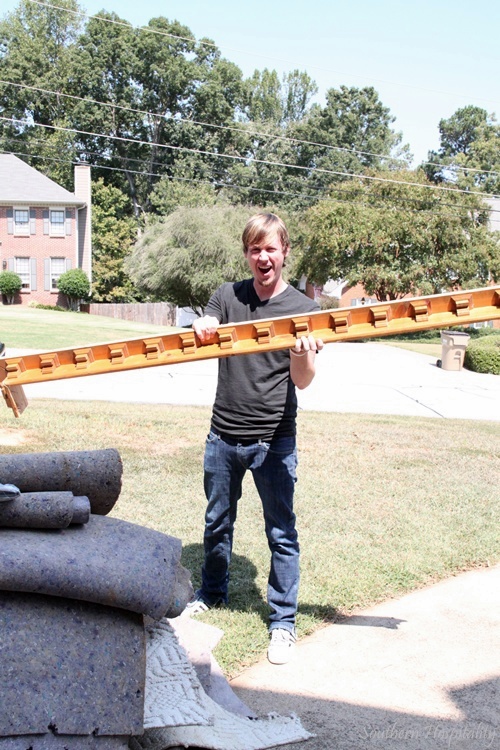 They had just ripped out the old mantel when we got there too.  Kevin is doing the honors of taking it outside. 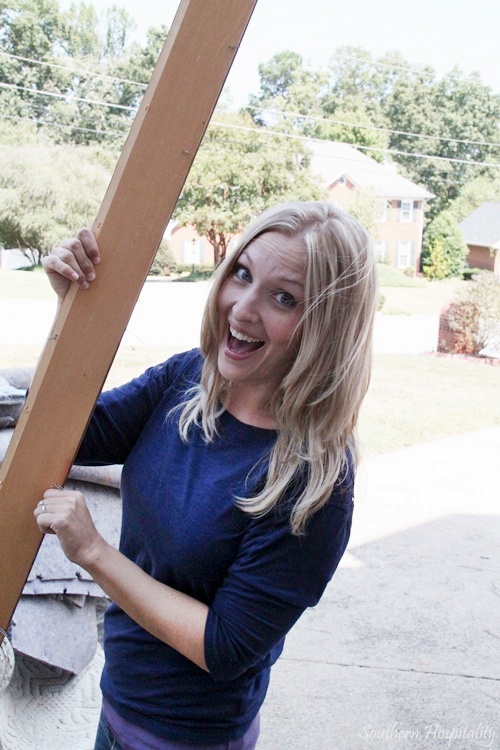 Layla got in on the action too. 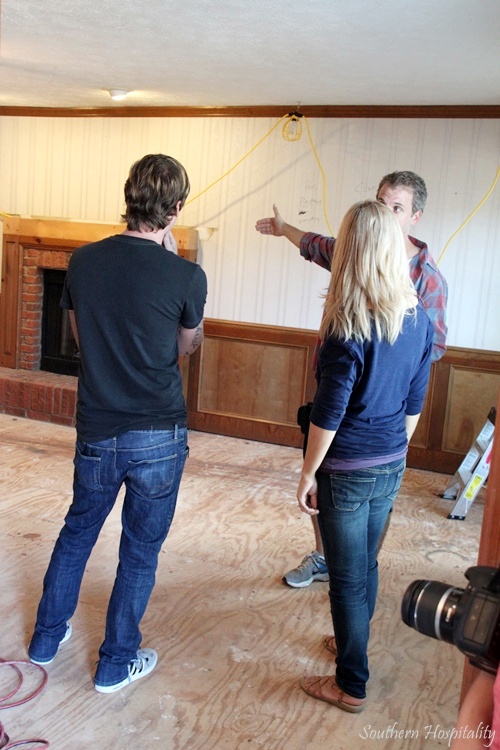 Their producer, Patrick, was giving instructions.  They had a ton of filming to do for this pilot and went all over the city to find good shooting spots, including the fair one night.  That was a hoot! 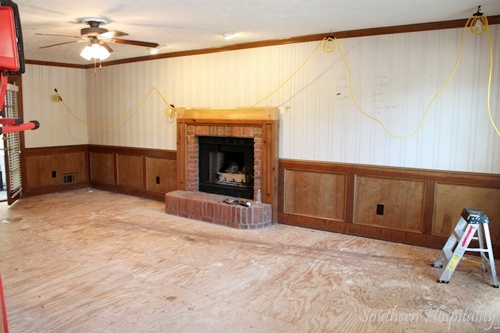 Here’s a peek at the Before of the room.  This is after the carpet had been ripped out.  You would not believe the Afters now.  I can’t wait to be able to show you one day. 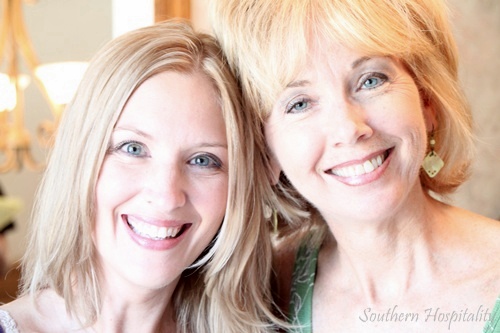 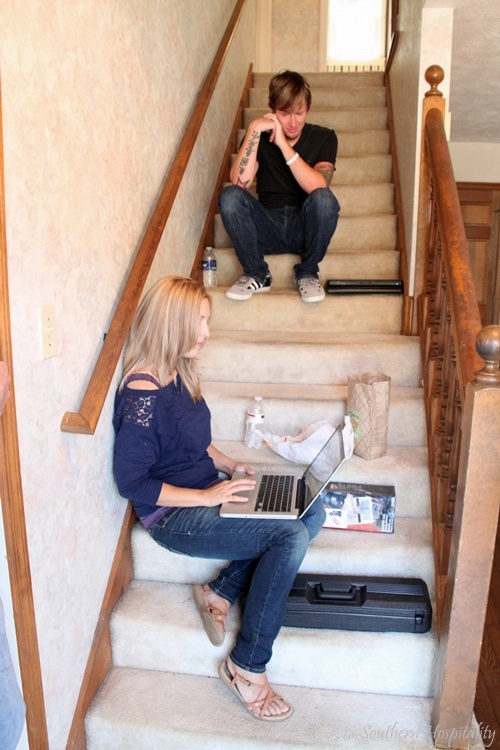 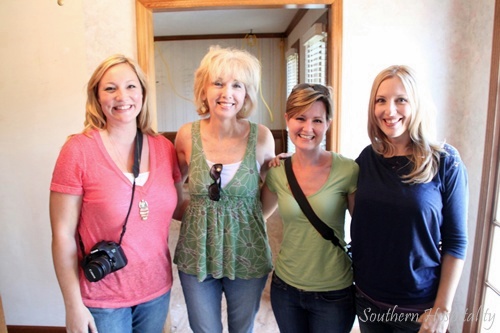 Shaunna, me, Lori (another Atlanta blog friend), and Layla. 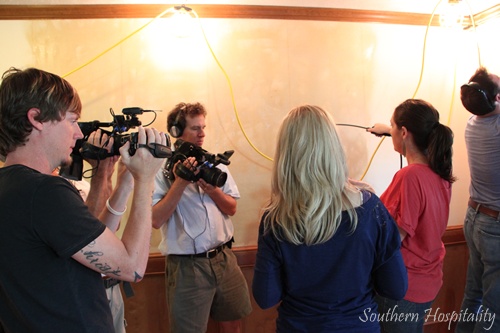 More cameras and filming the whole process.  This is Emily spraying down the walls with hot water and fabric softener to get the wallpaper backing off the walls.  There were about 8 of us tackling that and we got it down pretty fast. 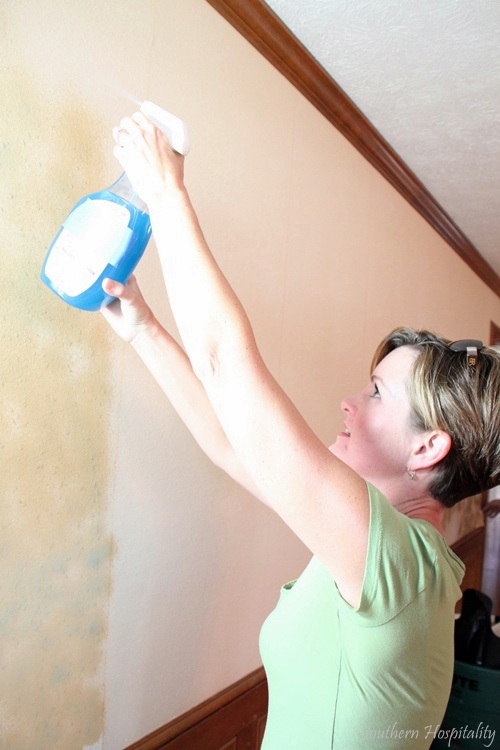 Here’s Lori spraying and scraping that paper off.  Not a fun job, but it had to be done. 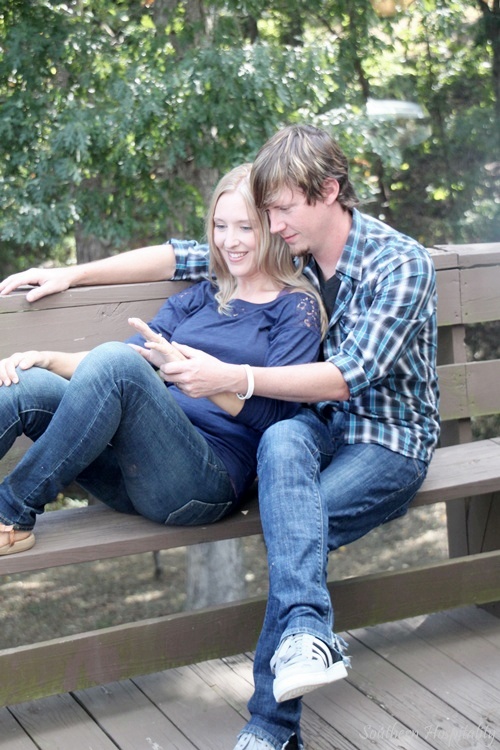 They did some fun little video shots of Kevin and Layla sitting outside and I took these through the window. 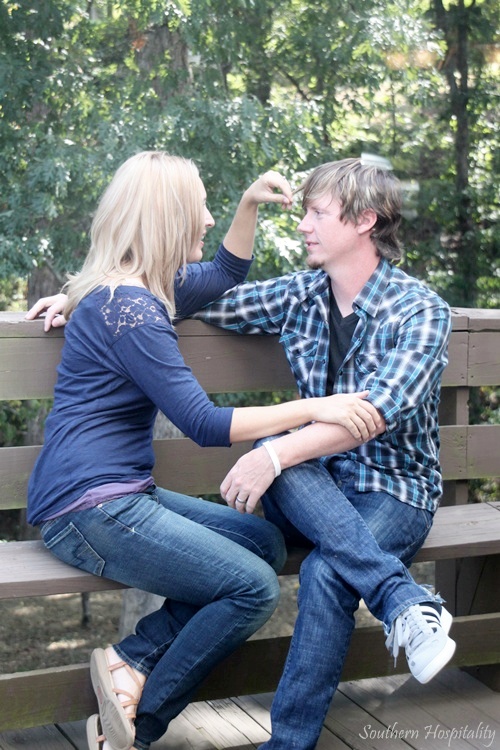 They are so cute and I always love hanging out with them. 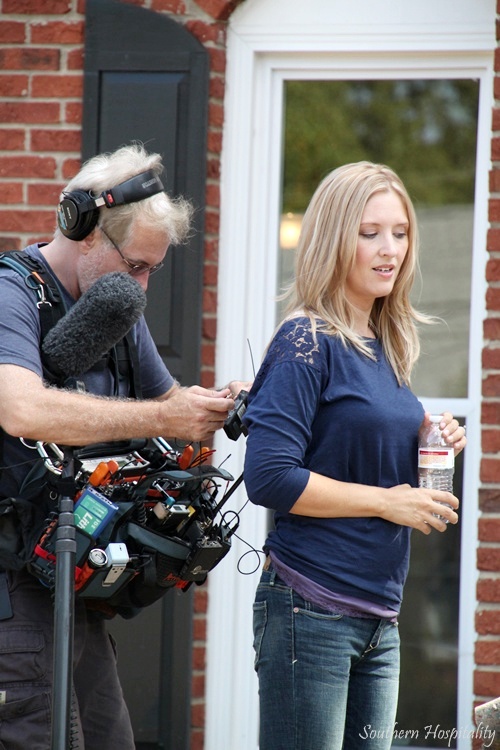 Layla getting her mike all in place. 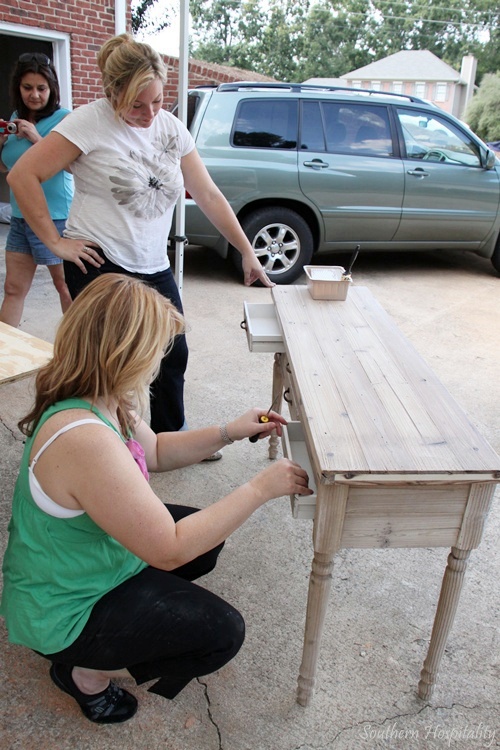 Another blog friend, sweet Charity, was there to help too, along with Shaunna, who took on several furniture painting/staining projects.  This rustic table was found at Homegoods and it got a completely different paint job. 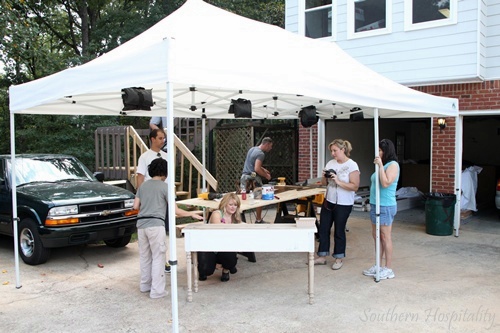 They even put up a tent to work under in the driveway. 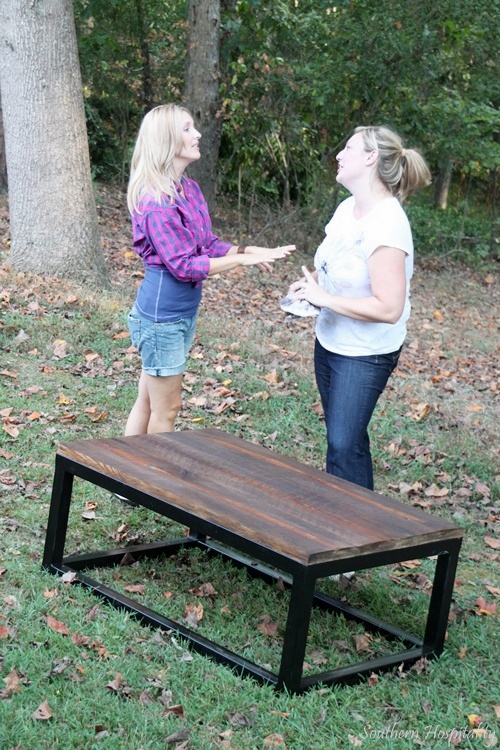 Some shots in the backyard, after Shaunna finished staining the coffee table, which was specially built by Southern Accents, that fabulous vintage architectural store in Cullman, AL that I’ve shared before.  They got several things from SA, including the wood floors.

We also had a fun day shopping at the Queen of Hearts antique mall up in Buford, GA, one of their 3 locations.  That was a lot of fun and I took some fun shots that I’ll share with you later!

So, that is a little bit behind the scenes of a TV show taping.  It is exhausting, busy, long and tiring, but definitely interesting.  I’m glad I got to help out and be there with them during this exciting time.

Even after filming a pilot show,  there is still no guarantee that it will get on TV.  It still has to go through channels with HGTV to be approved for airing and then it still has to be picked up for a whole season.  I wish them the absolute best with this fantastic opportunity and I just have a feeling we WILL be seeing this show!  I’ll be cheering them on the whole way.

This is going to be another busy week for me! On Thursday, I am flying to San Francisco for 5 days, to visit my friend, Kate the Centsational Girl herself!  I am so excited to spend some more time with Kate, since we met up at a couple of blog conferences in the past couple of years.  We have all sorts of fun things planned, not to mention, she lives in the wine country and near San Francisco, one of my favorite destinations.

Funny thing about how I got the ticket to go on this trip and a bit ironic.  You all remember I was supposed to go to Israel back in February and now you know WHY that trip was cancelled so abruptly.  I still had the ticket which was non-refundable and knew I could use it at some point, but only had a year to do so.  I didn’t have to pay a penny for the change fee, since it came off the ticket value.  I am using it for this trip and still have enough left for possibly 2 more domestic tickets and another year to use it.  Isn’t that cool?  God is SO good and I can tell you one thing, if He doesn’t want you to go somewhere, He will absolutely SLAM that door shut and He definitely stopped the Israel trip, thank GOD!  Much to my family and friends’ relief.  There was a lot of praying going on!

The winner of the Initials, Inc. giveaway is lucky #130:  Paula

Paula, I have emailed you already, so get back to me for your prize!