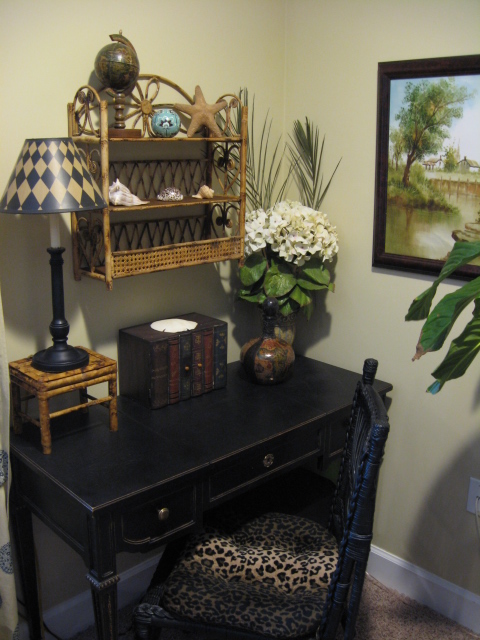 As promised, here are a few of the recent yardsale finds and where they ended up.  This bamboo shelf seems  to work above my black desk in the den, so that’s where it ended up, as well as the cute little bamboo stool. For now, I put the lamp on it, but you never know.  It might move later.  There’s another fake flower that will probably be leaving soon too. 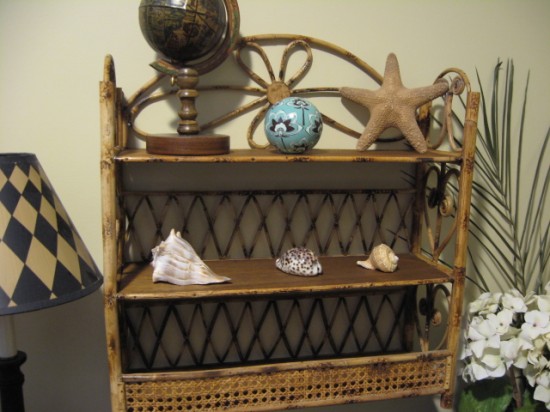 Most of these shells as well as the round aqua orb and the globe were all yardsale finds.

One of the fans is in the beachy guestroom on top of the black bookcase…. 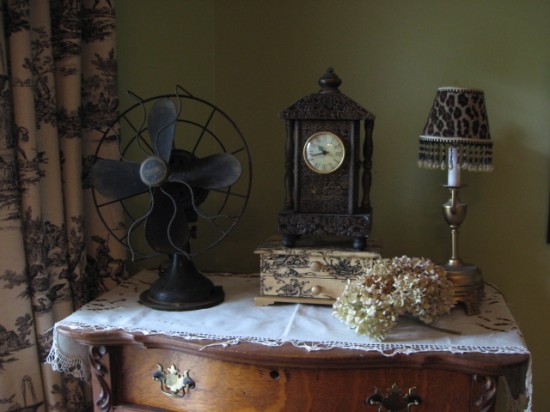 And the other one, in the toile guestroom.  I love how they look just hanging out.  They probably will not get used, but they sure are pretty to look at. 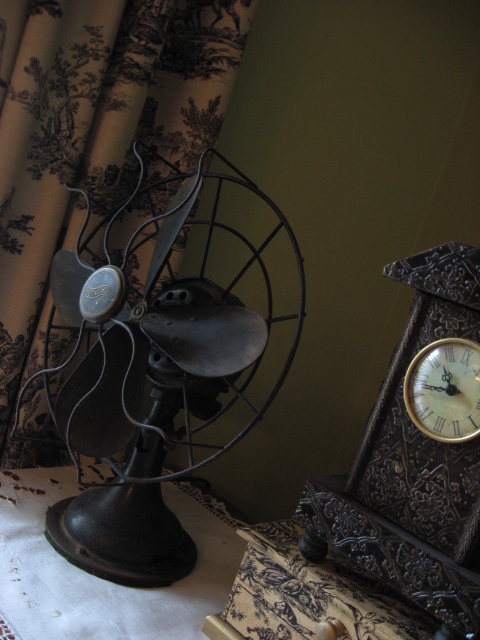 The black fan up close.  I think he’s my fave. 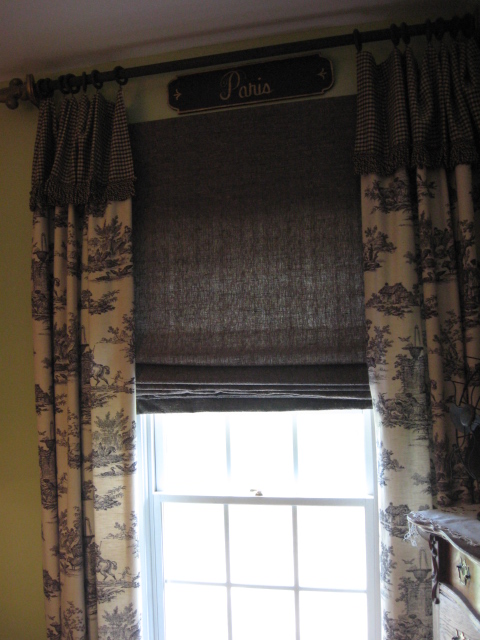 And in the toile room, I got the Roman shade hung up, after doing some renovations on it.  It was a set of 2 shades and they were too short for this window, so I cut the bottom off one of them and sewed it to the other one.  Then I had to get new strings that were longer to make them work properly too, but for a total of $8, I think it was totally worth it, don’t you?  I love how they look with my toile drapes. 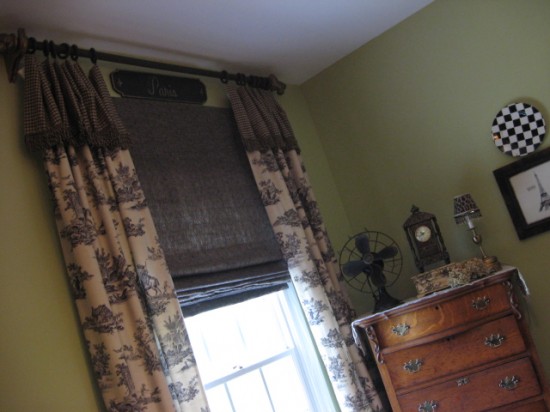 This window is finished and I can now get rid of the white metal blinds that were in here.  This looks so much better. 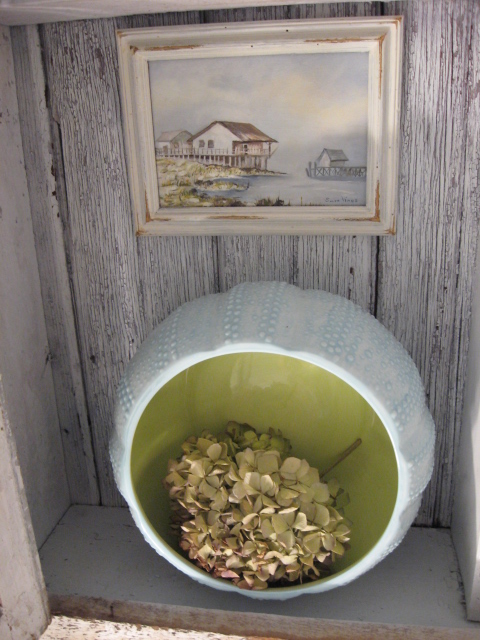 That tiny oil painting got a white frame treatment and sanded down and now hangs in the shabby cabinet in the downstairs bathroom.  Love this little piece! Doesn’t that just draw you in? 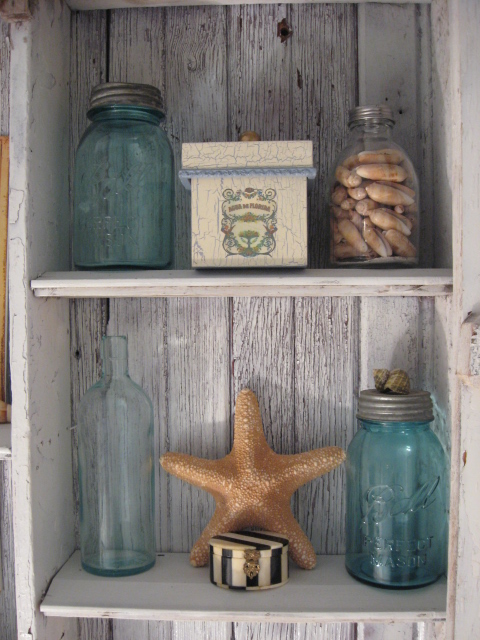 And the aqua Ball jars ended up in the shabby cabinet too.  I’m loving this old thing too, it really adds some personality to that bathroom. 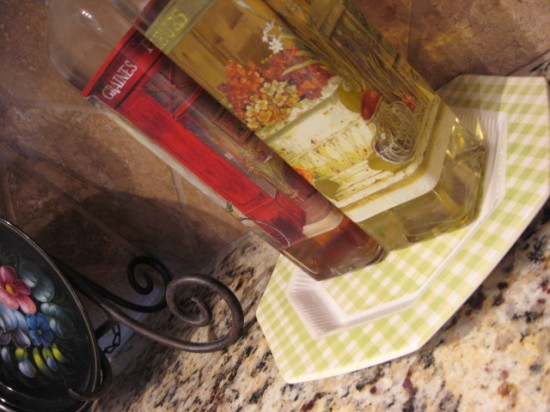 In the kitchen, I am using this pretty green and white checked plate for my oil and vinegar containers, just in case some olive oil decides to drip out on my counters.  Pretty and practical! 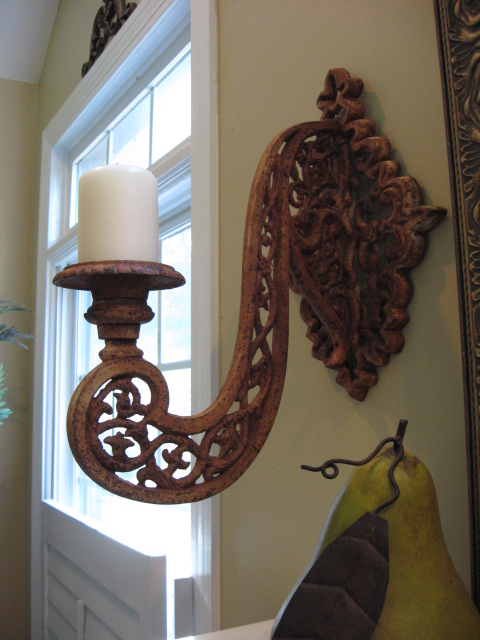 Those honkin’ sconces are hanging above the fireplace now.  I already had some screws in the studs on either side and these had some thick wire hangers on the back that worked perfectly, so here they are. 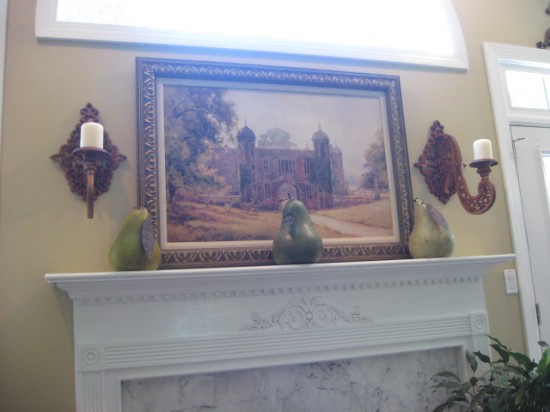 It’s always hard to take a good pic of this fireplace with the sun blazing in the windows. 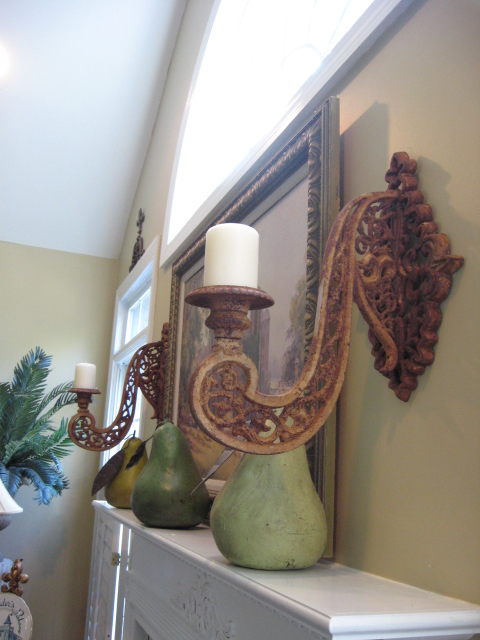 They are beauties and I’m so glad I got them!  They are quite prominent too and take center stage over the fireplace.  Even my hubby noticed them and liked them.

So, that’s a peek at where a few things have ended up.  I’ll be sure and do more updates with other things along the way too.  There’s usually a place for something you love !

Most likely, I will be doing a yardsale in the fall to clean out my stash closet again, so Birmingham girls who may be interested, stay tuned for that. 🙂

We’ll be spending a few days in the mountains with my family, but will be back soon.  If you want to see our trip up there last summer, click here, as  we’ll be doing a repeat of all of this, plus a fish fry with homemade peach ice cream.  Yep, we like to eat. 🙂

At least there’s some good walking in the area too, we’ll need to walk off that food.  I’ll be sure and take some pics to share with you too.  But, come back here tomorrow afternoon, cause I’ve got more of Grandma Eleanor to share! 🙂